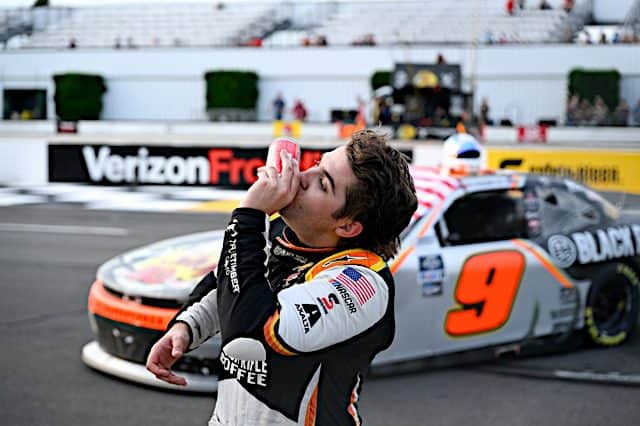 If you’ve paid any attention to the NASCAR Xfinity Series over the past four years, then you need no introduction to Noah Gragson.

Through his on-track prowess (eight wins, two Championship 4 appearances), his multi-layered victory celebrations (catching the track on fire, climbing the fence, shotgunning a beer, throwing up), his feuds with other drivers and teams or his Tim Richmond-esque look and demeanor, Gragson has made a name for himself in the series.

He’s got diehard fans and diehard haters, but they all can agree that the 24-year-old has talent.

That talent was rewarded last week with a NASCAR Cup Series ride. Gragson will drive the No. 42 for Petty GMS Motorsports in 2023, replacing Ty Dillon.

“I think it’s not only the hard work that I put in, but it takes a lot of people to get to this point of my career and to go get to the Cup level,” Gragson told Frontstretch. “The different members of different teams, it takes everybody that’s been involved since my first race. … Every single person that’s been a part of it, couldn’t have done it without each and every one of them.

“So it’s really not about me, it’s about the journey and the process and everybody’s hard work. And it takes a village to be able to get to this point in anyone’s racing career. And it takes a lot of people and a lot of support from partners and a lot of sacrifice from a lot of people. So I guess I kind of get the credit. But really, those people should be getting just as much credit, if not more, because none of this would be possible without each and every person involved.”

Gragson was probably the top Xfinity prospect on the market who didn’t have a clear-ish path to Cup like Ty Gibbs or Austin Hill. Though it would’ve made complete sense had he signed to drive the No. 16 for Kaulig Racing in Cup, since he’s already driving that car part time this year. Gragson said he and Kaulig had tried to make that happen.

“I would love to have [driven for Kaulig next year],” Gragson said. “I love this race team. I love every single person in the organization. We actually talked to Kaulig about putting a deal together for next year to run the Cup Series for them.

Instead, Petty GMS was the winner in the Gragson sweepstakes. Gragson being a Team Chevy driver and his Xfinity sponsor Black Rifle Coffee Company already being a No. 42 sponsor were positive factors. Another was that Dave Elenz, Gragson’s crew chief his first three Xfinity seasons, is Erik Jones‘ crew chief at the team.

“I know a couple people over there within the organization,” Gragson said. “My crew chief in Xfinity the last three years, Dave Elenz, [I’m] really tight with him. He’s been a big influence on my career, and I stayed close with him through everything.”

Sometimes a driver will say a statement like that and it’s really only surface-level deep. But Gragson and Elenz were far more than just work friends. Gragson was essentially adopted into the Elenz family. In February 2021, Gragson told Frontstretch about Elenz’s son asking him to come for a sleepover, and Gragson did not disappoint.

“I’m like, ‘Hell yeah, let’s do it,'” Gragson said. “So I had a sleepover with my crew chief’s son. So yeah, that’s how our relationship is as a team, we’re all pretty much family at this point.”

Although Gragson won’t have Elenz as his crew chief again, he’ll at least be in the same shop as him. And Gragson said he can already sense that Petty GMS has the same family atmosphere he’s experienced at JR Motorsports, Kaulig and Beard Motorsports.

“It’s truly a family atmosphere, and everybody is there for each other and enjoys going to work,” Gragson said. “And with the opportunity that came about with them, they offered me a great deal to hire me to come drive for them. I just felt like all the puzzle pieces aligned, and it felt like the right spot for me and my racing career to take it full time.”

But reuniting with Elenz is not where the reunions stop. By signing with Petty GMS, Gragson finally pairs with the team’s co-owner Maury Gallagher, who he has known since he was a kid growing up in Las Vegas, as they shared the same personal trainer.

“So my mom worked out with a guy named Will, who was her personal trainer,” Gragson said. “My sister and I would go work out just to keep us active when I was younger. Maury actually would work out sometimes right before my sister and I, after we got done with school, and I met Maury a couple of times just in passing and stayed connected and followed them and what they’ve done.

“And Maury and Mike Beam have been following my career. So I definitely think that Vegas connection is pretty cool, to be able to be somewhat of a home team when we get back to Vegas and whatnot. … He’s been a great mentor to me over the past few weeks to months, just learning from him. He’s super business savvy and really smart and really passionate about the racing, and he wants to win.”

As for the other Petty GMS co-owner, seven-time Cup champion Richard Petty, Gragson had only met him once prior to the announcement. That happened at Daytona International Speedway earlier this year thanks to Gragson’s friendship with Petty’s grandson, Thad Moffitt.

“He’s [Moffitt] like, ‘Hey, have you ever met my grandpa?'” Gragson said. “And I was like, ‘No, never.’ And he’s like, ‘Here, come over here and come meet him.’ And I said hello to him, and that was pretty cool. … But I’m sure over the next couple of years, we’ll spend more time with each other.”

But Gallagher is 73 years old, and Petty is 85. That means their expectation is to win now, so Gragson had better hit the ground running and have success right away. After all, the team moved on from Dillon after just one season.

“In [Gallagher’s] words, he’s a bit older and he doesn’t have a lot of years to go chase this deal,” Gragson said. “He wants to make a big splash in the Cup Series and invest a lot of his time and money and resources into the Petty GMS program.”

Fortunately for Gragson, the Cup Series won’t be completely new to him. By the time this season is over, he’ll have 18 starts — half a season — under his belt between his starts with Kaulig and Beard.

“This has been a learning year for myself, and we’ve progressed each and every race,” Gragson said. “For me behind the wheel, I think to start, I was really not up to speed with how fast the cars were. And as I’ve done more races with them and got more experience and learned each and every week that I’ve even been behind the wheel of the Kaulig Racing cars, it’s been good.

“We’ve made progression, and I’ve gotten closer to speed with Justin Haley and becoming more competitive. … So they’ve stuck behind me, getting me up to speed behind the wheel of these cars. It’s a lot different than the Xfinity cars, just how you have to drive the cars and whatnot. I’m just taking each weekend as building blocks and steps and trying to learn and be better the next weekend.”

Coincidentally, Gragson’s current Kaulig Cup teammate Haley was a rookie in Xfinity the same year as him. As was second-year Cup driver Chase Briscoe, who eventually won the 2019 Xfinity rookie of the year. 2020 NXS rookie of the year Harrison Burton also beat Gragson to the Cup ranks. So why is now the time for Gragson to move to Cup as compared to previous years?

"It's just me."@NoahGragson's mullet is back. Gragson always liked Tim Richmond's style and is putting his own little twist on it. #NASCAR // @JRMotorsports pic.twitter.com/m5IOx6qSfN

“I think maturity is a big thing, I think experience,” Gragson said. “There’s a lot of growing up to do when you have probably one of the more wild guys. But I really try and be prepared when I get to the racetrack and do take it serious.

“I know I somewhat put on a show and whatnot when I’m at the racetrack, but I do take it really serious and try to be the best version of myself and best racecar driver for the teams. I think taking it day-by-day and taking different experiences as learning experiences and trying to be better is the most important thing.”

“Making mistakes along the way, that’s a given, and just trying to learn from those mistakes and whatnot,” Gragson said. “But I think maturing, that comes with age and that comes with experience. … And I think with all those given experiences over the past six years racing in a NASCAR series, and really my whole career, all those moments have really shaped me into who I am right now.

“I think the opportunity and challenges up next is to try and get in the Cup Series. And that’s what we’re doing right now this year and next year.”

Despite the huge opportunity for Gragson next year, he maintains that he is still living in the moment and completely focused on this season.

“I’m not really focused on next year at all,” Gragson said. “I kind of honestly forgot about it. Like people this weekend at Richmond [Raceway] have been telling me congrats, and Wednesday was a big day, but I’m so focused on preparing and being ready for the opportunity and just taking it day-by-day and not getting too far ahead of myself. … Right now, it’s about racing on Saturdays in the Xfinity Series and racing on Sundays in the Cup Series and just trying to do the best job possible, be prepared when we get to the racetrack.

“I’ve honestly forgot about like the Cup deal for next year. That’s not even really a thought in my mind, and it’s just about trying to do the best that I can do on each and every given day.”

“I feel like for me, you never know when … I mean, who knows what will happen?” Gragson said. “You never know when your last day on earth will be, so I try to live it up every day like it’s my last, no matter what. I try and work hard each and every day. So, yeah, who knows? Tomorrow is not guaranteed.”

Fans who have been clamoring for less vanilla drivers for years, you can now enjoy the Noah Gragson Experience.

Next year we’ll finally see what the 42 team is capable of.
Now that they will have a driver that has shown he’s capable of winning.
One thing he’s going to have to do is put a bit of reign on his temper.
A talk with Ross Chastain might not be remiss.
When someone gets off on the wrong foot, it can be difficult to turn that around.