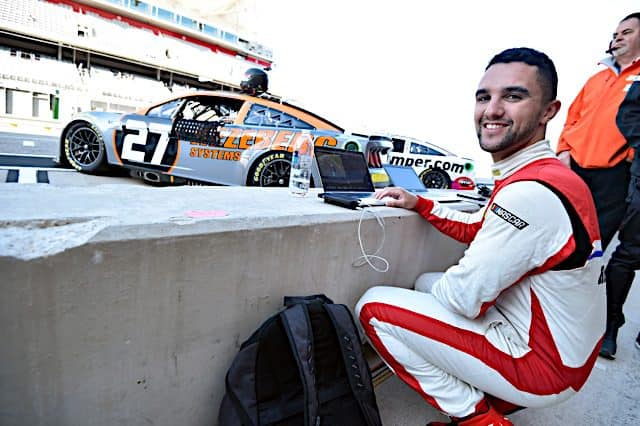 Reportedly rumored to be configured, what would be the best layout for Texas Motor Speedway?

Luken Glover: Intermediate track Texas should be reconfigured into … an intermediate? For the past few years, there have been groups of fans asking for more short tracks. With potential returns of North Wilkesboro Speedway or Nashville Fairgrounds Speedway, rumors like Memphis International Raceway and Lucas Oil Indianapolis Raceway Park, and the evident reconfiguration of Auto Club Speedway, Texas doesn’t need to become a short track. The best racing for the Next Gen car has been at intermediates excluding Texas. Texas used to put on exciting races with the old configuration. So bring an intermediate that allows for multiple grooves and isn’t as dependent on clean air.

Mike Neff: The best layout for most of these intermediates that need to be reconfigured. Somewhere between 5/8 and 7/8 of a mile. It will let most, if not all grandstands stay in place. Minimal effort is needed to change its pit road. Garages can stay exactly the same. It is a very easy reconfiguration.

Jack Swansey: First off, it’s great to see Texas is considering following Auto Club’s lead and taking a big swing at a better layout. Turning Texas into a short track is kind of the obvious answer since it would be good for the NASCAR Cup Series to have another short track outside of the current short track bloc in Virginia and Tennessee. But everything’s supposed to be bigger in Texas. Instead, with Auto Club ripping up its 2-mile layout just as it starts to give us great Cup racing, Texas should step in to replace it. Convert Texas to a 2-mile D-shaped oval with between 9 and 13 degrees of banking and sign long-term deals to run NASCAR and the NTT IndyCar Series. Market it as the world’s fastest racetrack, because technically, with NASCAR’s intermediate aero package and the highest average lap speed on the IndyCar calendar, it would be. It’s time for a new Texas World Speedway to rise from the ashes of Texas Motor Speedway.

Seven countries will be represented in the Cup event at Watkins Glen International. Which of the part-time foreign drivers will be the biggest surprise?

Swansey: 2007 Formula 1 world champion Kimi Raikkonen. While sports- and touring-car legend Mike Rockenfeller is flying under the radar, he’s driving the Spire Motorsports No. 77, while Raikkonen gets the benefit of one of Trackhouse Racing Team’s dominant road-course cars. Gone are the days when Robby Gordon could fight for the win for Ultra Motorsports. It’s not just the drivers that put more effort into road racing, it’s also the teams. For that reason, among the many gifted road racers making cameos in this weekend’s Cup race, it’s Raikkonen who has the best shot.

Glover: It has to be Raikkonen considering the equipment he is in. Trackhouse has been excellent on road courses this season, so that provides a great opportunity for Raikkonen. As Daniel Suarez said following Raikkonen’s test at Virginia International Raceway, the main hurdle will be the aggression of the series now. Raikkonen should be a pleasant surprise, however. Behind him, Rockenfeller has experience at Watkins Glen in a sports car and is in a decent ride with Spire to potentially make some noise in the top 20.

Neff: Well, a surprise is open for interpretation. With Raikkonen making his Cup debut, he has some great potential to be a strong finisher. Daniil Kvyat, Loris Hezemans and Rockenfeller all seem to be extreme longshots for a surprise finish. Kyle Tilley should have a decent run, so he won’t be a surprise.

Josh Roller: Raikkonen. F1 restarts can be wild, but it’s nothing like NASCAR. For the sake of NASCAR’s reputation and Trackhouse’s Project 91, I hope drivers have more respect for one another at Watkins Glen than they did at the Indianapolis Motor Speedway road course. Turn 1 at WGI has been inching closer to madness in recent seasons. But Raikkonen knows how stock cars can and will take more abuse than anything else he’s driven. He’ll be up on the wheel, and barring any wild mechanical failures, he’ll manage a top-25, maybe even a top-20 finish. That’s not to say the other six non-American drivers can’t finish that high, but this is a brand-new team essentially and it’s well funded, well tested and well prepared.

Is Watkins Glen a must-win race track for Martin Truex Jr., or can he still point his way into the Cup playoffs?

Roller: If Martin Truex Jr. finishes second and Ryan Blaney finishes 37th, then no, it is not a must-win. But with 15 different winners this season, if I don’t have a win and I want to make the playoffs, Watkins Glen and Daytona International Speedway are both must-win races. If a driver wins and they’re 26th in points, and at Daytona another driver higher in points than him wins for the first time, they aren’t moving on. At the same time, it’s a tricky spot for Truex and Blaney, because points for them matter due to the fight they’re in with each other. But Truex is a strong road course racer, so the No. 19 Joe Gibbs Racing team needs to play to that strength and go all in at Watkins Glen.

Swansey: His must-win was Richmond Raceway, and he lost. The road courses have been Toyota’s Achilles heel all season. While Truex was, at least for a time, one of the series’ top road racers, he hasn’t won at the Glen since he drove for Furniture Row Racing. To make matters worse, before the late-race chaos at the Indianapolis road course, Blaney was just a hair off the lead. Aside from a last-gasp chance to win his first superspeedway race (having to defeat Blaney, who is probably the current best at the discipline) two weeks from now at Daytona, the only way Truex makes the playoffs is if Blaney strikes misfortune. A season-ending crash or mechanical failure from the No. 12 team is far more likely than a Truex victory to put the No. 19 into the postseason.

Glover: There may be two races left, but this is a do-or-die weekend for Truex. Daytona is unpredictable, but if you want anyone in the car there, Blaney is at the top. When Blaney gets caught up in a wreck at Daytona, it is usually late. Plus, he is good at earning stage points there. Truex has past success at Watkins Glen and a lot of experience. The big concern is that Toyota as a whole has struggled at road courses this year. You never know what can happen with this car, but time is ticking for Truex.

Neff: It isn’t a must-win because there is still a spot open for a non-race winner. However, with two races left, both of which are wildcards when it comes to the finish, he needs to be darn close to the point when the checkers fly.

See also
5 Points to Ponder: Should a Championship Be Decided by a Good 1/3 of a Season?

Is Chandler Smith ready for a promotion from the NASCAR Camping World Truck Series?

Neff: Let’s pump the brakes and let Chandler Smith win a title first. So many drivers rapidly move up. Smith has great talent, but let’s not just thrust him to an upper series. Let him polish his skills and try to grab a title first.

Roller: Smith is worthy of an interview with JGR and Sam Hunt Racing for a full-time NASCAR Xfinity Series drive in 2023. He’s easily been one of the four best drivers in the Truck Series all season long and has often outpaced teammate John Hunter Nemechek. But performance isn’t the only factor that affects whether or not he gets promoted. How many Toyota full-time seats will be available in the Xfinity Series in 2023 if Nemechek gets promoted over him? And is Kyle Busch Motorsports is still running Toyota in February? He deserves to be promoted because his speed has improved tremendously from one year ago and he’s making more noise for race wins. I also wouldn’t be opposed to him doing another season in Trucks, with a heavy Xfinity part-time schedule. Unfortunately, there are just a few more factors at play than simply his race results.

Swansey: Absolutely. Smith has been maybe the surprise of the Truck season. After a few lean years for KBM, Smith and his part-time teammate Corey Heim have stepped up, becoming the first two Toyota development drivers to win multiple Truck races in a season since Christopher Bell. More than that, Smith is regularly outperforming experienced teammate Nemechek and, with his win at Richmond, has emerged as the strongest threat to championship frontrunner Zane Smith. Given the random qualities of playoff-determined championships and the well-documented erosion of driving standards within the Truck pack, the fact Chandler Smith has emerged as a championship threat means he has mastered the Truck Series. Another year and some more wins would be fine, but if a top Xfinity program comes calling, he should answer.

Glover: Definitely. Smith has steadily improved and matured in his Truck career. He has earned career bests in wins, top fives, top 10s, laps led and average finish (he has cut his average finish in half from 2021). He is at the front of the field more and currently leads the points following his win at Richmond. He is definitely a driver JGR should look at for its Xfinity stable next season. If not there, Sam Hunt Racing would also be a solid opportunity for him.

I thought the reconfiguration of the California Auto Club track was put on hold. Did I miss something? Is it back on and if so, when is it supposed to happen.