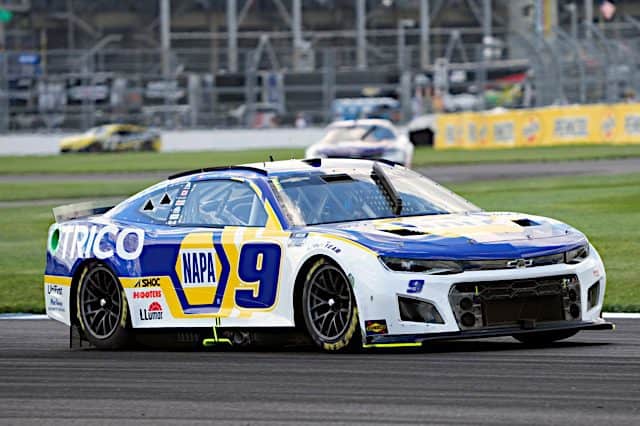 Just two NASCAR Cup Series regular season races remain for drivers to punch their ticket to the playoffs. With 15 winners, that leaves only one spot available for drivers who haven’t yet reached victory lane. Can any of them break through at Watkins Glen International? Whoever wins will likely be in your optimal daily fantasy NASCAR DraftKings lineup for the Go Bowling at the Glen, airing Sunday, Aug. 21 at 3 p.m. ET on USA Network.

Watkins Glen is a 2.45-mile, multi-elevational road course with seven turns, as well as a chicane commonly known as the “bus stop.” Though there are several passing opportunities throughout the course, there usually aren’t as many passes for the lead, at least in recent races held at WGI. Last year, two drivers led most of the laps, while in 2019, Chase Elliott led all but 10. It will be interesting to see how the Next Gen car runs there this weekend and whether we’ll see similar dominance out in front.

Since it’s the first year with the sport’s new car, the four previous road course races are your best bet to research trends on which drivers performed well and had good speed. I’d especially focus on both Road America and the Indianapolis Motor Speedway road course; these tracks used the same tire compound as WGI.

Before I move on to my DraftKings picks for Watkins Glen, here’s how last week’s drivers did at Richmond Raceway:

Denny Hamlin and Martin Truex Jr. did OK, but they were the only bright spots to this lineup. Ty Gibbs had an engine issue that made him the first driver out of the race, while Erik Jones was an innocent victim.

Jones was positioned behind Ross Chastain when he clipped Kyle Busch on a stage three restart; Busch slammed right into Jones, leaving the No. 43 Chevrolet unable to continue. Sometimes, luck just doesn’t go your way.

I had to start with road course ace Elliott. He has the most wins on this track type (seven) of any active driver, including two at Watkins Glen in 2018 and 2019. He led 52 laps in his first victory and, as I mentioned above, a whopping 80 of 90 laps in the second one. Then, last year, he placed runner-up to Kyle Larson, though he didn’t lead any laps.

It feels strange none of the current point leader’s four victories have come at road courses this season. I still won’t count him out at the Glen, though, as Elliott placed fourth at Circuit of the Americas, eighth at Sonoma Raceway (after leading 26 laps) and runner-up at Road America. The No. 9 Hendrick Motorsports driver nearly won that Wisconsin event and was out front for 36 circuits before Tyler Reddick passed him late.

If Elliott has another good car this weekend, look for him to lead laps and potentially earn his first road course victory of the year.

Reddick didn’t just go out and earn his first Cup win at Road America; he also claimed a second victory at the Indy road course after leading 38 laps. Before all that, he came home fifth in Austin, Texas. Reddick’s shown he can get out front and finish well on road courses in the Next Gen car, which is likely why he’s so expensive on DraftKings.

Last year at WGI, Reddick rolled off 13th and finished 10th. Not bad for his first year there in Cup. Prior to that, in 2019, he earned a fifth place in the NASCAR Xfinity Series event.

Can Reddick have a fast Chevrolet and once again lead laps, contending for the victory? He likely will need to for this salary to work, but his recent road course history makes him impossible to ignore.

Last year’s race at the Glen saw Bell finish where he started in seventh place. In Xfinity, he wound up ninth and second in 2018 and ‘19, respectively, so he knows his way around this place. Whether Bell can finish in the top 10 in a Next Gen car is the bigger question, especially since Toyotas have somewhat struggled on some of the road courses this season.

But Bell did come home third at COTA after starting seventh. Plus, at Indy, he led 17 laps before incurring some damage and crossing the line in 12th place. These efforts show even when the manufacturer is a bit slower than some others, Bell can still get in the front of the pack if crew chief Adam Stevens strategizes well.

Don’t like Bell? If you wish, a similar-priced alternative is Daniel Suarez on DraftKings, as he earned his first Cup win at Sonoma back in June.

Buescher has had some good results at WGI, including an 11th in 2017, 13th in 2019 and 17th in last year’s event. Last August, he gained seven positions on the track to provide a couple of additional bonus points.

But that history isn’t the only reason why I chose the No. 17 Roush Fenway Keselowski Racing pilot.

For one, Buescher was one of the drivers who tire tested at the Glen in May (William Byron and Truex were the other two). Plus, he was runner-up at Sonoma, sixth at Road America and 10th at Indy, overcoming a fire in the most recent road course event. He’s averaging about 39 DraftKings points on this track type thanks to these solid performances.

Though his salary is the highest it’s been in months, Buescher should still produce a good fantasy score on DraftKings. He’s even a dark horse contender for the win.

Jones’ top fives at the Glen came when he drove for Joe Gibbs Racing in 2018 and 2019. Last year, he unfortunately wound up 27th in his first year with Richard Petty Motorsports (now Petty GMS Motorsports).

Even though he struggled last season driving the No. 43, Jones improved his craft on some of the road course races this year. Back at COTA in Match, he drove through the field from 30th to ninth place. Then, at Sonoma, he advanced 11 spots to 22nd. Finally, at the Indy road course, he gained 20 positions en route to 15th. Jones overcame adversity in several of those races.

A lower salary here allows you to fit several higher-priced drivers in your lineup. Jones has plenty of upside if Lady Luck tilts his way.

I know what you may be thinking. “Ty Dillon? Really?” Yes, really. Look, at this salary, all you need from him is just a few spots gained on the racetrack, and Dillon tends to do just that. He was 19th in 2017 at Watkins Glen and moved up seven positions to place 23rd in 2018.

Dillon has had similar outcomes on road courses this year, too. For instance, at COTA, he moved up 13 spots to earn a 20th-place result. Then, at Sonoma, he gained 11 positions to wind up 23rd, while at Road America he had a net +10 after starting 30th. Unfortunately, at Indy Kyle Larson couldn’t avoid Dillon going around a turn and crashed hard into his car, forcing an early DNF.

But Dillon was in good position in that race, too. If he can keep the No. 42 car clean, the position differential after starting 28th should be plenty to help your DraftKings score.