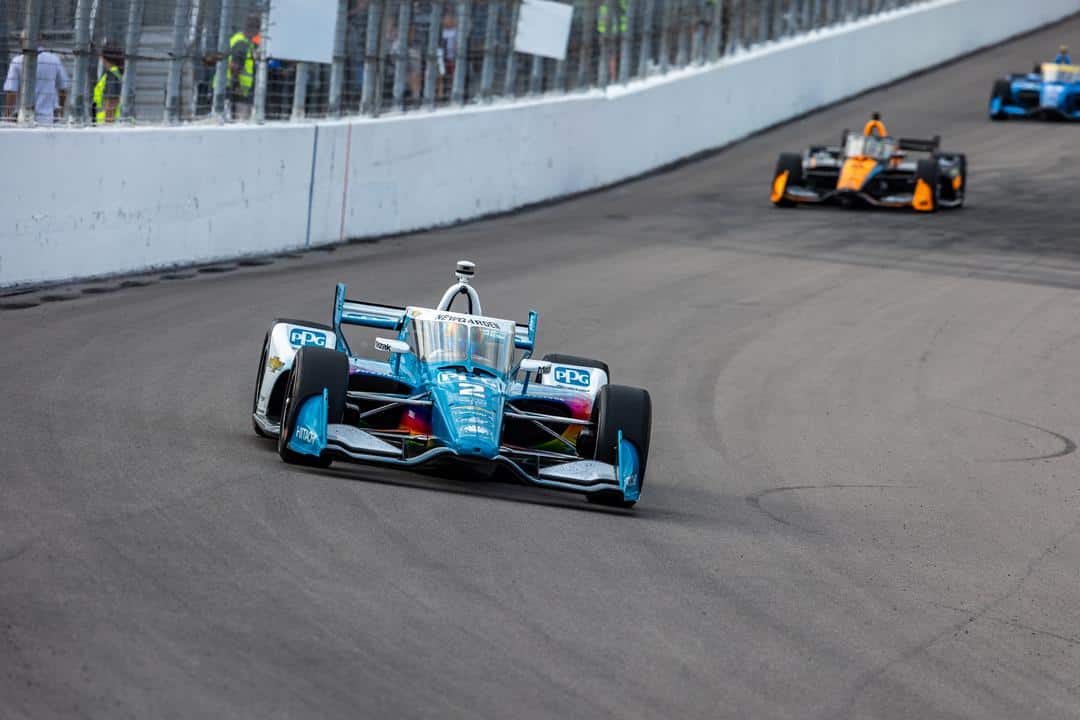 Behind Newgarden, rookie David Malukas pulled off a daring pass around Scott McLaughlin on the white flag lap and grabbed his career best finish in the process, coming home second.

Newgarden had nothing but praise for his third placed teammate in victory lane.

“I knew Scott was going to be good at the end there, and he had a great restart,” Newgarden told NBC.

“He was no slouch this weekend. He was very, very good and you know, Scott’s done an amazing job; he could’ve easily won this race himself … But I’m glad we were able to come back out on top.”

The race’s conclusion came over two hours behind schedule after rain red flagged the race on lap 217, eight laps after McLaughlin swiped control of the race from Newgarden. McLaughlin and his Penske teammates dominated the evening in St, Louis only being briefly challenged by Arrow McLaren SP’s Pato O’Ward – and eventually Malukas.

Newgarden took the lead once again as the race got back underway with 43 laps to go, and never relinquished control from that point on.

He passed Scott McLaughlin on the final lap to score a runner-up finish and his first podium in the NTT @INDYCAR SERIES. pic.twitter.com/1unNyuh2Hi

Teammates Malukas and Takuma Sato both used fresh tires to mount a last ditch charge to the front, with Malukas making his way around Power, O’Ward, and Colton Herta en route to his attack on McLaughlin. Malukas’ previous best finish had come at Iowa, an eighth place result.

“Unfortunately, two laps to go, that’s the one lap I decided to do the outside lane and it worked so well,” Malukas reflected after the race.

“So, if I would have done that a bit sooner, maybe we could have done something for Newgarden. But, I mean overall that is a win for me, a win for the team. Man, they deserve that so much!”

Power led the first half of the race from a historic pole position until he was overtaken by O’Ward during a restart just beyond the halfway point of the race. The caution triggering said restart featured Jack Harvey making contact with the turn 4 wall, forcing the field’s hand and leading McLaughlin, Newgarden, Sato and others to pit for fresh tires while Power and O’Ward opted to retain their track position.

Newgarden may well have held off McLaughlin, had he not found himself staring up the gearbox of Christian Lundgaard on pit entry. Having to follow Lundgaard through the pit entry wound up costing Newgarden 1.065 seconds on pit road, allowing McLaughlin to decisively pass the two-time champion on the backstretch on lap 209.

Rinus VeeKay was the race’s only retirement after an electrical issue struck the Dutchman during the first quarter of the race. Harvey’s lap 144 scrape with the wall was the only caution for an incident on track throughout the race.\

Next up for the NTT IndyCar Series will be the Grand Prix of Portland from Portland International Raceway. Coverage will begin Sunday, Sept 4, at 3 p.m. ET on NBC.

The finishing order of the 2022 Bommarito Automotive Group 500 is:

It was a fantastic race, but you wouldn’t have known it was based on this recap. Was there anyone else available to write this who actually watched the race and wouldn’t just go through the motions?

To be fair, the first 2/3 of the race was not that interesting as everyone was anticipating rain and mostly in fuel save mode to try and stretch each stint as far as possible (trying to avoid being hung out a lap down when the rain showed up). Outside of some moves on the start, and Pato making a little noise working toward the front, most others seemed content to play the fuel save game.

Post rain, the final 40 laps made up for it with multiple duels for position on track (the primary two being Newgarden / McLaughlin and Malukas storming to the front) while Dixon and surprisingly Power were in full damage control trying to limit points loss on a not horrible, but less than stellar day for both.

Points are tight, the next two races for the Championship should be good!

Moreover, you may want to hire an editor that would have avoided the glaring errors present. That may require actually paying someone.