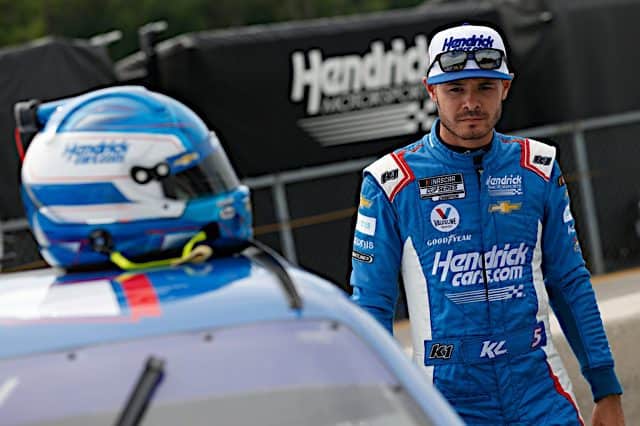 Larson got the lead on the restart after Ty Gibbs and William Byron spun out together in front of him in the bus stop.

“I got lucky,” Larson said after the race. “I think my only shot really was if the (No.) 54 and (No.) 17, you know William and Ty got racing. I just wanted to help William down the frontstretch as much as I could, then they got to battle up the esses. I tried to help him get clear to the bus stop, they raced side-by-side into there, got together and the seas parted and I was able to get through.

“Then I had AJ (Allmendinger) behind me, so I was just trying to hit my marks as best I could. He had me definitely nervous out in front of him.”

The race was filled with mayhem early and often, starting with Justin Allgaier on lap 5. He spun around off the esses and nosed into the wall, becoming the first car out of the race.

Then, a few laps later, Jeb Burton lost his brakes and spun with Myatt Snider in the bus stop. Burton couldn’t continue on due to the brake issue.

On lap 15, Patrick Gallagher had a mechanical failure and stopped in the chicane, bringing out the caution once again.

And in the final few laps of stage one, Smith shot out to the lead over Allmendinger, while Riley Herbst and Snider had some trouble navigating the course. Snider’s problem was a bit more severe, as he ended up rear-ending the wall, causing major damage to his car.

Smith took the stage one victory before losing the lead to Larson at the start of stage two. However, a few laps later, Byron got by Larson to get out front.

Several more incidents occurred in stage two, including an Alex Labbe crash into the ARMCO barrier.

After another caution for Kris Wright’s stopped car that set up a three-lap sprint for stage two points, multiple cars spun around. Sam Mayer went around in the bus stop, while Cole Custer got punted around and into a wall coming out of the bus stop. Friday (Aug. 20) evening’s ARCA race winner Brandon Jones also spun around in turn 7 with two laps left in stage two.

But Byron ended up coming out on top to end the segment.

Stage three started off fairly clean, with a tight battle off pit road under green between Gibbs and Byron. However, that all came to a halt on lap 59.

Daniel Hemric lost the left front in the carousel, slamming into (and going under) the tire barrier.

A lengthy caution followed to repair the barrier and clean up oil that was laid down by Snider.

The race finally went back to green around lap 68, with Gibbs getting out in front of Byron and Larson.

However, the restarts were not done yet, as Ross Chastain got stuck in the sand trap.

Gibbs and Byron battled for the lead on the last restart, with Gibbs getting loose on the inside of Byron in the bus stop, spinning them both out.

Larson, who was close behind the pair, took the lead and won his first Xfinity road course race.

Announcing crew made it sound like it was Byron’s fault, not Gibbs. Not sure which ones because 3 of them all screech the same to me.

I had to turn down the volume because of all that yelling. It’s just ridiculous.

We all knew what little silver spoon baby gibbs was going to do and he did it, The kid has no class just like his grandpa

I’m not a Gibbs fan, either Coach, or the pup. But that having been said, it’s a huge step from Xfinity to Cup, & it looks to me like Gibbs has handled his limited opportunities better than Cindric. Yes he won Daytona, but that’s as much luck, as skill, and other than one good road course finish he hasn’t shown much.
I think we have to prepare for Gibbs being in the 18 next season.

I an concerned for Kurt Busch, & the safety of the new car. It may just be a new awareness of concussions, not a bad thing. But given similar circumstances, it could something about the new car.

Other drivers have said that the hits were harder with the new car.

Either way, W/O the accident Gibbs would have been looking at another
year of Xfinity.