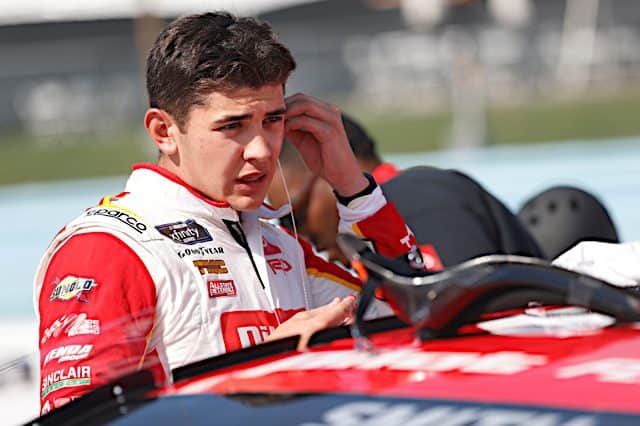 WATKINS GLEN, Ny. – Sammy Smith, who turned 18 a little over two months prior to Saturday (Aug. 20), potentially made a name for himself after finishing third in the NASCAR Xfinity Series Sunoco Go Rewards 200 at Watkins Glen International.

The 2021 ARCA East champion, Smith started the day off in a big way by passing road-course veteran AJ Allmendinger on a two-lap shootout for the stage one victory.

“I think, overall, for my confidence it was good,” Smith said after the race. “I was able to get a good start there and peek out on him on the top. I was perfect for those last two laps to get the stage win.

“It was good overall to get off-sequence a little bit. Put us in a bit of a hole to start the race in qualifying, but overall, a good day.”

In the closing laps of the race, Smith drove back into the top four before a caution came out for the beached car of Ross Chastain in turn 10 of the venerable upstate New York road course. Smith gave William Byron a huge push into turn 1 on the restart (which came to green with five laps to go), survived being in the middle of a three-wide sandwich coming out of the turn and then, well, chaos occurred on the back straight and in the bus stop.

Although he lost a position to Allmendinger on the restart, Smith passed the spinning cars of Byron and Ty Gibbs in the bus stop and was able to finish a career-best of third to end the race without incident. In just his fourth career start, Smith turned plenty of heads with his big performance.

“I think I’ve adapted well,” Mayer said about his transition from ARCA to Xfinity. “I think there’s some areas, and multiple areas, where I’ve put ourselves in a bad spot.

Smith will next be racing at the Springfield Mile in Illinois on Sunday (Aug. 21) in the ARCA Menards Series. The dirt track will serve as an interesting test for the young driver. The Iowan has never run on dirt before in his career, as per his post-race media interviews.

Of course, there was one more what-if question about Smith’s race. Would one more restart have provided him with a chance at his first victory?

”I don’t know,” Smith told Frontstretch. “I don’t think I was in the best spot, starting third. But I would have given it a shot.”

He did well and drove smart.

I think he has a real shot at a great career. Here’s one who missed out on what might have been. Butch Lindley was one of the best I have seen and he was injured and died way too soon. He had the race won but there was a late caution and his car broke on the first extra lap.