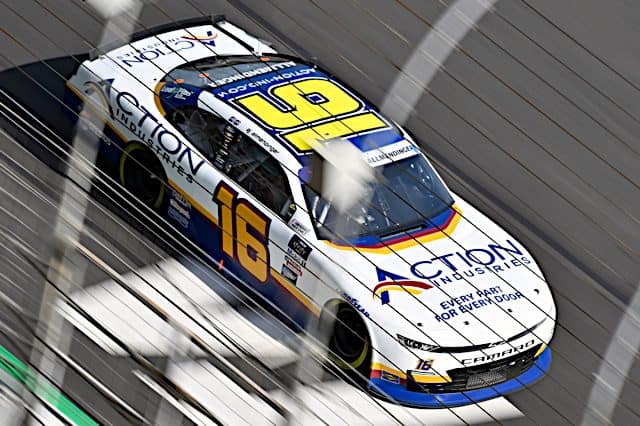 WATKINS GLEN, N.Y. – The NASCAR Cup Series race at Watkins Glen was sponsored by Go Bowling, and one of the weekend’s favorites ended up with a 7-10 split.

Having evolved from a fresh-faced open wheel driver to one of the most respected road racers in all of NASCAR, A.J. Allmendinger came to the Glen locked and loaded to earn two more winner’s trophies.

Instead, the Californian had to settle for second to Kyle Larson on Saturday. Then again on Sunday.

“Finishing second sucks, let’s get that straight,” Allmendinger began his post-race comments with. “But when it’s Kyle Larson, I’ve said it once, I’ve said it a thousand times: he’s the most badass driver on the planet right now.

”I don’t care what you put him in, he can go win. And he shows it pretty much every day.”

Allmendinger’s day did not have the best start. On lap 2, Austin Cindric locked his tires heading into turn 1 in wet conditions and turned Allmendinger around in the right hander.

Allmendinger benefited from the turn’s long run-off area and avoided any damage to his Chevrolet. The incident did not cause a caution.

“We had to fight hard, getting spun early and use all of the strategy,” he explained following the race.

But that didn’t stop the No. 16 Chevrolet from speeding back through traffic. As the race went on, Allmendinger slowly brought his car back up into the top 10 outside of pit stop cycles.

“Honestly, it was one of the most fun race cars I’ve ever driven in my life,” he exclaimed. “The thing was hooked up.”

Suddenly, with five laps to go, the NASCAR Xfinity Series points leader found himself third on a restart, then moved up into second after race leader Larson locked his brakes and ran up into second place restarter Chase Elliott.

That opened the door for Allmendinger, but he could not get all the way through and get into victory lane for the third time in his Cup career.

“It’s tough to finish second to [Larson], but in the end, we were there,” Allmendinger said after the race. “Yesterday, we kinda got gifted a second place.

“Today, we earned it…. It was just a fun day. I wish it was just one spot better.”