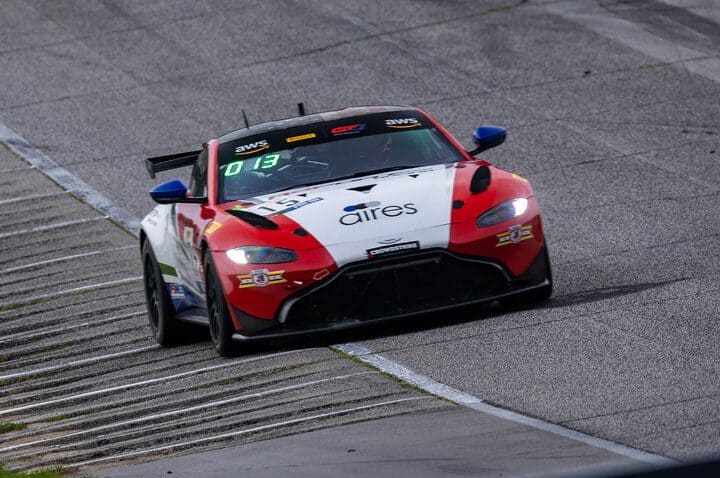 BSport Racing’s Bryan Putt was able to run down SMOOGE Racing’s Todd Coleman and pass him entering Canada Corner with 20 minutes to go Sunday (Aug. 21).  From there, he held on to win Pirelli GT4 America SprintX Race No. 2 at Road America along with teammate Kenton Koch.

“It feels really, really good to get back [to victory lane],” Putt told SRO America’s Shea Adam after the race.  “Kenton [Koch] ran an amazing stint and gave me a great car.  I’m very grateful to be here.”

Rennsport One’s Eric Filguerias started from the pole and led early.  Unlike Saturday, Filguerias was not free to just drive away from everyone without challenge.  This time, Filguerias had SMOOGE Racing’s Aaron Telitz giving chase in his Toyota GR Supra GT4.  The two drivers staged a fierce battle for the lead in the opening laps.

12 minutes into the race, Filguerias went wide in turn 1, which allowed Telitz to get to the inside.  By turn 3, Telitz had cleared Filguerias to take the overall lead.

Going wide in turn 1 typically doesn’t result in serious consequences at Road America, other than a warning for violating track limits.  However, the IMSA weekend earlier in the month saw a piece of asphalt come up in that runoff during practice.  It is possible that Filguerias hit something else out there.  Shortly after he lost the lead, Filguerias began dropping off of the pace.  Exiting turn 8, the left front suspension appeared to fail on the No. 18 Porsche, resulting in Filguerias getting stuck in the gravel in the Carousel to bring out the race’s first caution.  Given the amount of time necessary to extricate Filguerias’ car from the trap, the pit window was delayed by a minute.

Koch moved up to second with Elliott Skeer third in class.  The order remained steady until the leaders pitted with 25 minutes to go.  Telitz stopped and gave way to Coleman.  They gave up some time in the pits, but still held the lead.

Unfortunately, Coleman didn’t have the pace of Telitz.  As a result, Putt was able to run Coleman down.  After a couple of laps of battling, Putt got a run exiting the Kink and was able to sweep past Coleman into the overall lead.  Flying Lizard Motorsports’ Elias Sabo was able to pass a lap later and run down Putt.

With 12 minutes to go, Sabo was able to get a run on Putt on the frontstretch and tried to get past.  However, he went too hot into turn 1 and went wide.  That allowed Putt to maintain the lead and allowed Sabo to fall into the clutches of Adam Adelson.

Any chance of another assault on Putt ended shortly afterwards when Lone Star Racing’s Zane Hodgen spun exiting the Kink and went hard into the wall to bring out the safety car.  With no way to get the race restarted before time expired, the checkered flag was flown a lap early, giving Putt and Koch the win.

The top three finishers overall were in the Pro-Am class.  Fourth in Pro-Am was Coleman and Telitz, while fifth went to NOLAsport’s Jason Hart and Scott Noble.

In the Silver class, Filguerias was leading the class in second overall when the suspension failed and ended his day.  That gave the class lead over to Geesbreght, who was running eighth overall at the time.

In Am, Carrus Callus Raceteam’s Terry Borcheller qualified in the top five overall and had the fastest lap of all in Race No. 1 Saturday.  Once the green came out, Borcheller, 56, drove away from the rest of the class and got himself up to third overall.  Borcheller was able to hold onto that position until the mid-race stops, where Nick Shanny took over.

Shanny was not able to keep up the pace that Borcheller set.  Ultimately, he dropped down the order, allowing AutoTechnic Racing’s Rob Walker to run him down and take the lead.  Walker was able to hold on to take the Am class win with Alex Filsinger in 11th overall.

BimmerWorld Racing’s James Clay and Charlie Postins were second in their BMW, followed by KRUGSPEED’s Anthony Geraci and Jaden Lander.  Shanny and Borcheller had to settle for fourth, while Rennsport One’s Nelson Calle and Juan Martinez were fifth.

Pirelli GT4 America SprintX teams will be back in action the weekend of Sept. 23-25 at Sebring International Raceway.  Race No. 1 is scheduled for Sept. 24 at 4:05 p.m. ET and will be streamed live on the GT World YouTube channel.