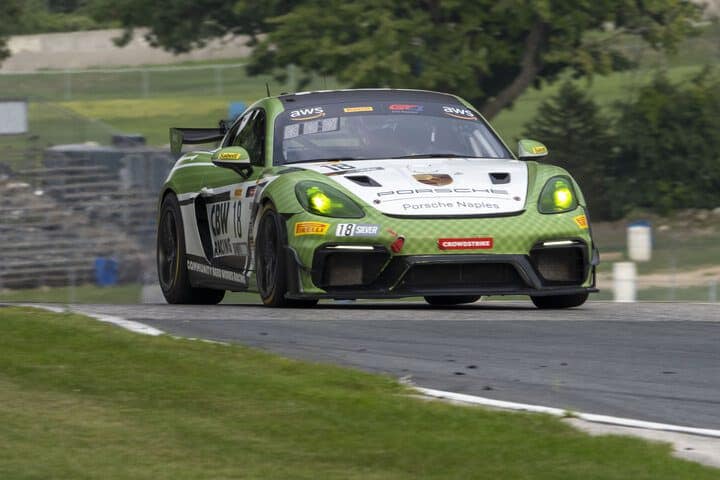 Rennsport One’s Eric Filguerias and Stevan McAleer continued their strong form by winning the first Pirelli GT4 America SprintX race of the weekend Saturday (Aug. 20) at Road America.  It is the duo’s eighth overall victory of the year in nine races.

“[Today’s race] was a testiment to Stevan McAleer and his driving ability,” Filguerias said after the race.  “He gave me the car in position to win.”

This weekend, Rennsport One switched things up.  Instead of Filguerias starting on Saturday, McAleer was given that role.  Since the team is running in the Silver class, switching of roles is completely ok.  The result was that McAleer qualified his Porsche on the pole.  Once the race got underway, McAleer was able to pull out to a decent lead over the pack.

Behind McAleer, Conquest Racing’s Gavin Sanders was second and running strong.  SMOOGE Racing’s Kevin Conway was right on his heels.

The race was ultimately clean until the mid-race pit stops.  Then, trouble struck on the pit lane.  The access road to pit road narrows considerably when it goes underneath a pedestrian bridge.  Conway was trying to make as much time as possible getting into the pits, while Sanders was a bit more conservative.  Conway ended up running into the back of Sanders at the pit in line, damaging both cars.

Conway knocked the right side headlight out of his Supra and had some bodywork damage, but he got off easier.  Sanders had significant damage to the left rear of his Mercedes that required significant repair.  Sanders and Michai Stephens would eventually finish 26th overall.

With McAleer and Filguerias’ immediate competition taken out of contention, Filguerias ended up with a 21-second lead after the pit stops.  That was despite the pit stop timer not working inside of the No. 18 Porsche, meaning that the team actually lost nine seconds during their stop.  Filguerias was able to expand the advantage to over 24 seconds at one point before he backed it down a little.  Regardless, it was an easy overall victory for Rennsport One.

In the Silver class, Filguerias and McAleer won by 33.086 seconds over Dexter and Starkweather.  Despite the rear end damage, Sanders and Stephens ended up third in class, even though they were a lap down.  Conway and John Geesbreght were fourth.

The Pro-Am class had Newell and Adam Adelson battling hard for the class lead early behind the top Silver class teams in fifth and sixth overall.  This was a clean battle with no contact.

The aforementioned contact in the pits and slow stops meant that this battle, now between James and Skeer, was for second overall.  Hart was right there as well in his Porsche.  Kenton Koch was fourth in his Aston Martin, but he was forced to pit with 11 minutes to go with a flat tire.

James was able to pull away a few laps into the run from Skeer.  Hart was able to take second from Skeer with just under 10 minutes to go.  Ultimately, the class came down to a duel between James and Hart.

The stewards were not fans of this move.  After the race, James and Newell were assessed a two-position penalty for the contact.  As a result, the Premier Racing Porsche of Adelson and Skeer took their third win of the year.

Adelson and Skeer’s margin of victory was .803 seconds over Hart and Noble.  James and Newell had to settle for third, followed by Flying Lizard Motorsports’ Andy Lee and Elias Sabo.  AutoTechnic Racing’s John Capestro-Dubets and Tom Capizzi were fifth.

In the Am class, BimmerWorld Racing’s Charlie Postins started on the class pole and ran in the top 10 overall early on.  That said, Rooster Hall Racing’s Johan Schwartz was right there with Postins, ready to pounce.

Schwartz got that chance 15 minutes into the race.  Postins made an abortive attempt to get past Noble and lost momentum.  That allowed Schwartz to get alongside and past entering turn 6 to take the class lead.  Schwartz was able to get himself up to seventh overall prior to the mid-race pit stops.

Trouble struck for Schwartz’s teammate Todd Brown after the stops as he spun in turn 5.  This cost him the class lead as James Clay was able to make the pass.  A penalty from speeding in the pits during the mid-race stops completely ruined the day for Rooster Hall Racing.

In the closing laps, Clay began to drop back.  This allowed KRUGSPEED’s Jaden Lander to get past for the lead in the closing laps.  Lander then pulled away to give himself and Anthony Geraci their first Am class victory of the year.

Geraci and Lander ended up 11th overall and just .309 seconds ahead of Clay and Postins.  NOLAsport’s Alain Stad and Matt Travis were third in their Porsche, followed by Carrus Callus Raceteam’s Terry Borcheller and Nick Shanny.  Rennsport One’s Nelson Calle and Juan Martinez were fifth.

Pirelli GT4 America SprintX teams will be back for their second race of the weekend Sunday afternoon at 12:10 p.m. ET.  The race will be streamed live on the GT World YouTube channel.