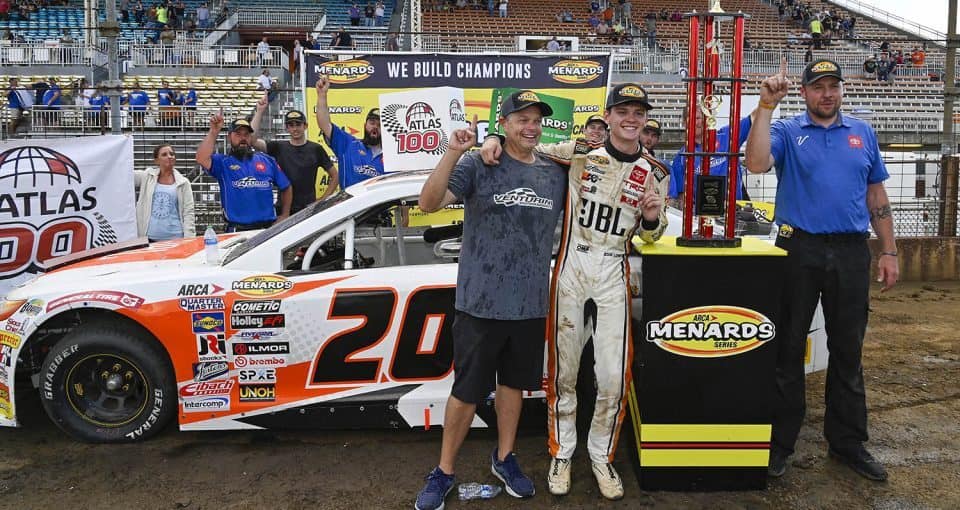 Jesse Love won the Atlas 100 at the Illinois State Fairgrounds on Sunday (Aug. 21), an ARCA Menards Series race that wound down on a clock and was ended even further prematurely by a vicious crash with the white flag about to fly.

Love started on the pole after the lineup was set via owners’ points, per the ARCA rule book. Love led every lap at the one-mile dirt track known as the Springfield Mile to score his first ARCA victory of this season, as the back-to-back ARCA Menards Series West champion earned the second main ARCA win of his career.

“Really happy and grateful that Buddy [Kofoid]’s alright,” Love told FloRacing in victory lane. “That was pretty wicked. I don’t think any of us saw the lapped car [Haugeberg] until we were there. Thank God he’s alright. Other than that, we had a phenomenal Toyota Camry today. Huge thank you to all of our sponsors […] it was a rocket ship. I’m sure Buddy and I were chomping at the bit last night seeing it rain, and then this morning it was getting a little rough and obviously really technical. You got like a half a car length of moisture to get your left rear and left front in so it got really technical at the end. Then we started to drive away.

“Buddy was my favorite dirt driver growing up. I always looked up to him when I was starting to get into dirt racing. He was obviously the man at like 14 years old. It’s an honor to beat him today and he’s obviously a tremendous talent […] happy that we can get this one and get our season rolling in the right direction.”

🗣️ @jesselovejr1 is getting comfortable on dirt after leading all the laps to win the @ARCA_Racing Feature at @ILStateFair!

Love led his teammate Kofoid, but as they approached the white flag, Kofoid never saw Haugeberg’s No. 12. Kofoid piled into Haugeberg’s car, sending the No. 12 tumbling onto its side.

Another look at the accident pic.twitter.com/uwhIj7twlB

Both drivers walked away unscathed.

Like Buddy Kofoid, Bryce Haugeberg will have a lot of work to race in Du Quoin. pic.twitter.com/ScklJrNNDR

“I’m OK,” Kofoid said. “I’m kind of sore, so I’ll probably be sore tomorrow and the next few days. Pretty unfortunate; it would’ve been nice to run the time out. We were slowly getting closer to Jesse, and I feel like we were a tenth to a half second faster a lap and I kind of found where I needed to be and not push the nose or hang the tail out on the exit.

“So it would’ve been nice to finish off the race. Even when I was behind Jesse, two cars behind him, I couldn’t see him. So I don’t know what could’ve been different about that. Having windshields makes it kind of tough and the glare makes it 10 times worse.”

Kofoid’s car didn’t flip in the wreck but was entirely destroyed after rear-ending Haugeberg.

“I’m glad he’s alright,” Kofoid said. “I’m not sure what happened to him. I feel like if you’re broke or stopped, you need to be off the racing line and down to the bottom. I guess I can only assume what happened. But it’s just unfortunate. So [I’m] glad to finish second, I guess, and know that we had good speed and I felt comfortable. I thought we had a faster car so I owe it all to Kevin Reed [his crew chief] and the whole crew.”

Here is the No. 15 of Buddy Kofoid, who hit the 12 on the front stretch. Thankfully both drivers are ok. #nascar #arca #Atlas100 pic.twitter.com/8Zx7CHQrGb

“I was just staying tighter on the guardrail and could keep it straighter,” Kofoid added about his runner-up finish in his main ARCA debut. “I felt like I was a little more disciplined on the throttle without hanging it out and slipping off the moisture strip onto the guardrail. I feel like that was kind of something I found that would keep me straighter and I could get to the throttle harder on exit. I felt like I was within a lap or two of poking my nose in there and moved him off the groove and tried something. But I guess we’ll never know, unfortunately.”

2020 ARCA Springfield Mile victor Ryan Unzicker finished third after starting second-to-last (20th). Unzicker spun his No. 24 early on in the race, but he rebounded to finish third in his first ARCA start this season.

“Really difficult coming from the back to the front,” Unzicker said post-race. “We had to make the best out of it. Use that higher line early just to try to stay out of trouble. We definitely had a car that I think maybe possibly could’ve won the race, but these young kids are good […] we just had a really good car all day. Got tight there at the end; at the end of the day, coming home third after starting way in the back, tore-up nose and stuff, I’m pretty happy with our results.

“I really enjoy racing here, I just wish the track was a little smoother. I wish we could’ve qualified because I feel like we had a really good hot rod, and we could’ve possibly challenged for the lead there. Once I spun myself out there going for it, I just really took myself out of contention. Hate it for the guys that I did that but I was really pushing it there right at the beginning just trying to get track position, because I knew if I could get out in front, I could have a clear windshield and be good. But that’s one of the battles here at Springfield, especially when it’s dirty and gets your windshield dirty. When that happens, it’s hard to battle back.”

The ARCA competitors head to the Milwaukee Mile in one week for their next event. The Sprecher 150 will take place on Sunday, Aug. 28 at 3 p.m. ET, with TV coverage provided by MAVTV Motorsports Network and available on FloRacing.

ARCA running two races the same weekend several hundred miles apart is stupid. Even though Venturini came in 1-2, they had to lose several thousands of dollars this weekend.