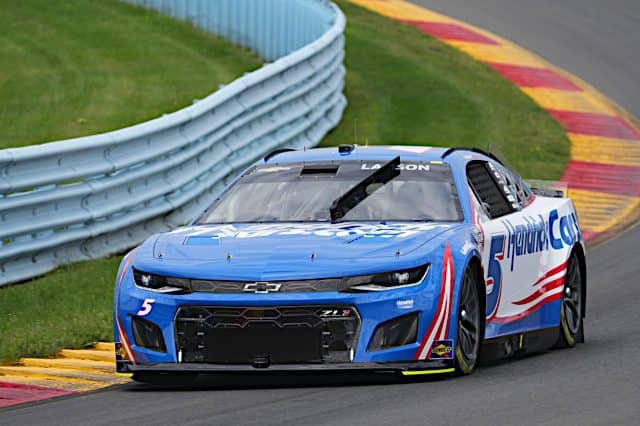 For the second day in a row at Watkins Glen International, the race came down to a five-lap duel between Kyle Larson and AJ Allmendinger.

In Sunday’s (Aug. 21) NASCAR Cup Series Go Bowling at the Glen, Larson once again came out on top, sweeping the weekend and scoring his second Cup win of the 2022 season.

Larson’s teammate Chase Elliott won the pole in Saturday’s qualifying, but led only three laps before losing the lead to Michael McDowell. It was the combination of crew chief Alan Gustafson’s gutsy call for a two-stop strategy and the Georgia wheelman’s grit to re-pass McDowell on lap 49 that put Elliott back to the front of the lead strategy.

On a restart with five laps to go, Larson knocked Elliott out of the way in turn one, and held the top spot all the way to the checkered flag.

Have another look at @KyleLarsonRacin's winning pass on Chase Elliott at @WGI. #NASCAR pic.twitter.com/5F29w45nGZ

Elliott was less than pleased.

Chase Elliott does not appear to be a happy person at the moment. pic.twitter.com/9G9q2jsZUH

“I knew everyone’s aggression would be higher as each restart went on,” Larson said to NBC. “I didn’t want to put myself in position again to get passed by AJ [Allmendinger] or Joey [Logano] who were really aggressive behind me […] it’s just part of racing at road courses, especially this year, it seems like […] not proud of it, but we did what we had to do.”

Joey Logano ended up third at the flag, while Elliott faded to fourth.

"Huge congratulations to Kyle and everybody on the No. 5 team … Seriously, they deserve it."- Chase Elliott pic.twitter.com/e9vPYLF6kP

“Huge congratulations to Kyle and everybody on the [No.] 5 team,” a tight-lipped Elliott told TV cameras. “Congratulations to everyone at Hendrick Motorsports, and appreciate Kelley Blue Book for being on our car this weekend.”

After waiting two hours for the green, fans saw an absolute treat of a first stage.

The #NASCARPlayoffs picture could change in a big way with a @Mc_Driver win!

He takes the lead from @chaseelliott in Stage 1! pic.twitter.com/JA2lhjOu7W

In wet conditions, McDowell and Tyler Reddick powered around Elliott and fought tooth-and-nail for the lead, but a perfectly-timed switch to slicks gave Chase Briscoe the lead. An ensuing defensive masterclass from the No. 14 gave the Indiana native his fourth stage win of 2022.

Rookie Todd Gilliland made waves early. After muscling his way into the top five in the first stage, he led the field to green to start the second. Gilliland handily paced the field for the next eight laps before a broken axle sent the No. 38 Mustang to the garage. He ceded the lead to Logano, who led the rest of the way home to claim his fourth stage win of the year.

All weekend, the eyes of the racing world were on legendary Formula 1 driver Kimi Raikkonen, making his Cup Series debut in the No. 91 for Trackhouse Racing Team. After starting 27th, the Finn found himself running in the top 10 for much of stage two.

Take a look at what happened in the bus stop. #NASCAR

On lap 45, contact with Ross Chastain sent Austin Dillon spinning in the inner loop, and contact with Loris Hezemans knocked the No. 91 into the tire barrier. Raikkonen was eliminated with damage, finishing 37th.

After Ryan Blaney failed to score points in stage one, Elliott locked up the regular-season championship (and the 15 playoff points that accompany it) with one race remaining.

Larson’s win ensures that only 15 different drivers have won their way into the playoffs with a single race remaining in the regular season, locking in lowest-placed winner Kurt Busch, who has missed the last four races due to NASCAR’s concussion protocol.

Almindinger, logano, and Chase would all have done what Kyle did with 5 laps to go, go for the win. Lol, he was even given the inside lane to make it easier. Bubba is only 7 points ahead of 21st place. Will nascar help him at Daytona !

Nascar already has the Bubba plate special ready to go !
Plus the Toyota teams have got orders who to make sure is at the head of the drafting line. Sorry Martin.