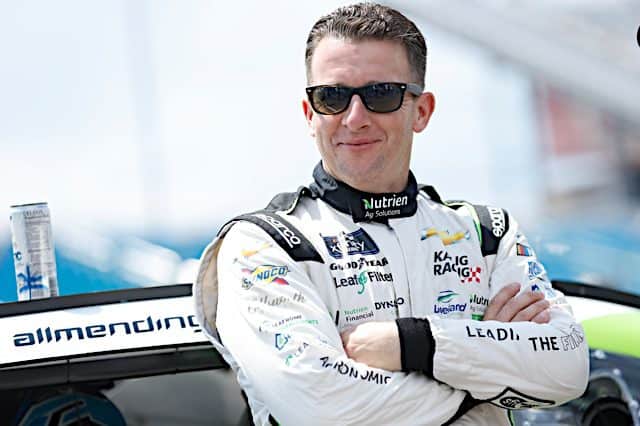 So close, yet so far.

That could summarize AJ Allmendinger’s weekend in a nutshell. Allmendinger is a road course ace in NASCAR, the dominant force on this track type in the NASCAR Xfinity Series. That has translated into his part-time NASCAR Cup Series stint, too, peaking with a win last summer at the Indianapolis Motor Speedway road course.

However, Allmendinger’s prowess was bested in both series at Watkins Glen International, finishing runner-up to reigning Cup champion Kyle Larson in each event.

On Sunday (Aug. 21), Cup’s Go Bowling at the Glen was arguably peak NASCAR 2022. Drivers not only faced the Glen in the Next Gen car for the first time, but they also had to do it in the rain. That worked to Allmendinger’s disadvantage on lap 2 when Austin Cindric locked his tires up going into turn 1, spinning Allmendinger from fifth.

Varying schedules to switch from rain tires to the slicks allowed Allmendinger to recover and finish stage one in 10th. After restarting deep in the field in stage two, the No. 16 Action Industries Chevrolet finished the stage in 11th.

Drivers figuratively heard Jaws music in the final stage as Allmendinger methodically worked his way through the field. The Kaulig Racing driver then charged up to sixth before making a green flag stop. When everything cycled through, Allmendinger found himself in fourth before a caution flew with 12 laps remaining.

On the restart, Allmendinger muscled his way around Michael McDowell to challenge the Hendrick Motorsports drivers of Larson and Chase Elliott when another caution came out for Loris Hezemans.

"Running his own race. Got to get on TV. Sponsors matter" – Chris Rice.

The final restart saw Larson drive deep into turn 1, washing up the track and clearing Elliott in the process. That opened the door for Allmendinger, who was all over Larson for both the lead and race win. However, just like the NXS race the day before, Allmendinger could only get a sniff of Yung Money and had to settle as the bridesmaid.

“Obviously, Kyle (Larson) drove it in quite deep to get the lead there on Chase (Elliott) and I was getting shoved in the corner,” Allmendinger said. “Maybe if I could have gotten the car squared off a little bit earlier in the corner… but, obviously, I was getting run into so hard that I was happy just to keep it on the racetrack and not have anybody next to me off the corner.

“Just proud of everybody at Kaulig Racing. This is absolutely one of the most fun cars I have ever driven in my life. I was hustling it and it was fast. The Action Industries Chevy, can’t thank them enough. To finish second in a Cup race in your first year as a team isn’t bad. But God, when you are that close, it’s disappointing.”

Just like the Xfinity race, the dominant driver lost grip of the win in the closing stages only for Allmendinger to miss biting the carrot by one spot.

Theoretically, Allmendinger has had a shot at three Cup wins this season.

First, he laid a bumper to Ross Chastain on the final lap at Circuit of the Americas only to have the favor returned and his shot of winning go up in smoke. At the Indianapolis Motor Speedway road course, the No. 16 was on the front row for an overtime restart only to get tangled up with Ryan Blaney. Now comes the close call at the Glen that gave Allmendinger his third top 10 in four Cup races and first top five of the season.

But beyond the stats come the probable frustration and wonder from Allmendinger of what could have been.

Allmendinger may have come closest to victory in the end, but Michael McDowell was the biggest threat all race long to burst the playoff bubble. Had the track remained wet throughout the event, we could be discussing a very different outcome. McDowell took the lead early in the race from Elliott after starting third, surging to the front on lap 4. He held the lead until lap 13 when he came to pit for slicks. After cycling to second, he pitted once again to get on a three-stop strategy.

The drying of the track slowly dwindled McDowell’s advantage but the No. 34 Love’s Travel Stops Ford held strong at the front of the field, finishing stage two in third. The one-stop strategy from McDowell allowed him to retain the lead to begin the final stretch. The Phoenix, Ariz. native held that spot until lap 49 before relinquishing it to Elliott. When a caution flew with 12 to go, the Front Row Motorsports driver was sitting third.

It was the next restart that hurt McDowell significantly. He got shuffled from third to sixth in turn 1 before the last caution flew. McDowell was unable to recover in the end, winding up in that sixth position. The veteran backed up what he told Frontstretch at Richmond Raceway, which was that he would be aggressive on restarts and strategy.

With the last chance for McDowell to make the playoffs at Daytona International Speedway next weekend, the site of McDowell’s lone Cup win thus far, expect him to adopt the same approach.

“It is disappointing,” McDowell said. “I don’t think we quite had enough for the No. 9 or the No. 5. I tried to hold them off as long as I could. They just had a bit of pace on me. They were pushing me hard enough that I was getting wide and making mistakes.

“I tried to make a move on that second-to-last restart there and got a pretty good run on the No. 5 and went to the inside and it just didn’t work out. We got jammed up on the bottom, and everyone was smashing into each other and we lost a couple of spots. That was pretty much it at that point. It is just disappointing. We’ve got to win to get into these playoffs. But I am proud of everybody at Front Row. We had a fast car and we were in the hunt. It just wasn’t quite enough.”

In a way, Erik Jones’ season has been a rollercoaster. One week, he is running in the top 10 and making serious noise. The next, either misfortune or a missed setup seems to hit the team. Jones quietly snuck his way to a 10th-place finish at Watkins Glen, making it four top 10s in five starts at the track. To reference that rollercoaster, Jones has now had four top 10s in the last eight events. On the flip side, you will find four finishes of 15th or worse. Jones only needs four more such results to match his 2020 total of 13 when he was with powerhouse Joe Gibbs Racing.

Joey Hand once again made the most of his road course background. Hand had his No. 15 Rick Ware Racing Ford inside the top five for several laps in the final stage, seemingly on a path for a career day for both himself and RWR. However, it all unraveled on lap 79. While trying to return to the top 10 following a green flag pit stop cycle, Hand lost control in turn 1 and spun into the tire barrier. The crash relegated him to 31st.

The No. 15 slides into the tire barriers in Turn 1 to bring out the caution with 12 laps to go.@JoeyHandRacing was a standout performer most of day.#NASCAR pic.twitter.com/8O4plbPr8G

Todd Gilliland has quietly been a road course standout in NASCAR, winning the inaugural Truck race at Circuit of the Americas in 2021 and earning his first Cup top five at Indianapolis. That led to Watkins Glen, where Ryan Blaney and Martin Truex, Jr.’s points battle was looking to be all for naught between the Front Row Motorsports drivers. Gilliland finished fourth in stage one and got up front to begin stage two, leading five laps and running the fastest laps on track. Heartbreak struck when Gilliland suffered a broken axle, forcing him out of the race and leaving him 37th. Nevertheless, the rookie driver certainly opened eyes even more.

Seven countries were represented in the Cup race, the most in a single race in history. Several of them were with underdog teams, with two of them making their Cup debut.

Kimi Räikkönen undoubtedly had the most buzz around a driver this weekend, as the 2007 Formula 1 champion made his first Cup start to launch Trackhouse Racing Team’s Project 91. Räikkönen began to find his groove in stage two, driving into the top 10 and going toe-to-toe with drivers like Chase Elliott.

Unfortunately, a promising run for Räikkönen ended in an unfortunate way. On lap 45, Ross Chastain turned Austin Dillon in the bus stop. As the field reacted, Loris Hezemans drove up and made contact with Raikkonen, sending the No. 91 Recogni Chevrolet into the outside barrier and cutting his day short.

Still, Räikkönen’s entry brought an extra level of intrigue to the race and should lead to more future opportunities for global motorsports stars.

Hear from Kimi Raikkonen after a crash ended his day at the halfway mark of the race. #NASCAR @THProject91 // @TeamTrackhouse pic.twitter.com/u7lTK38R0C

German driver Mike Rockenfeller also made his Cup debut, finishing in 30th. Rockenfeller got inside the top 20 at one point, but contact with Tyler Reddick in the bus stop on lap 32 offset his race. He was the highest finishing international driver aside from Daniel Suarez.

Hezemans found himself in three separate incidents, receiving a bump from Truex on pit road, sliding into Räikkönen, and bringing out the last caution after getting stuck in the gravel trap. He would finish in 33rd.

The other international drivers in the event were Russian driver Daniil Kvyat and the British driver Kyle Tilley. Both suffered mechanical issues during the race, with Kyvat finishing in 36th, 32 laps down while Tilley’s issue forced him out of the race and in 39th.

Seven different countries will be represented in Sunday's @NASCAR race at @WGI — the most in series history.

This week’s scheme of the race has to go to Räikkönen. Räikkönen piloted the No. 91 Recogni/iLOQ Chevrolet in the event, and the scheme brought the same splash that the Trackhouse Racing Team cars have brought all year long.

Despite a wreck ending his race early, this may not be the last time we see the 42-year-old competing in stock car racing.

Welcome to the top 10, Kimi 💪 pic.twitter.com/uKNfAca4eT

Like these underdog updates every week! I was rooting for McDowell and he had a shot til just about the end.

The underdogs do exactly what they are in the example of Brian’s productt to do…bring out cautions for double file restarts that lead to KAOS.