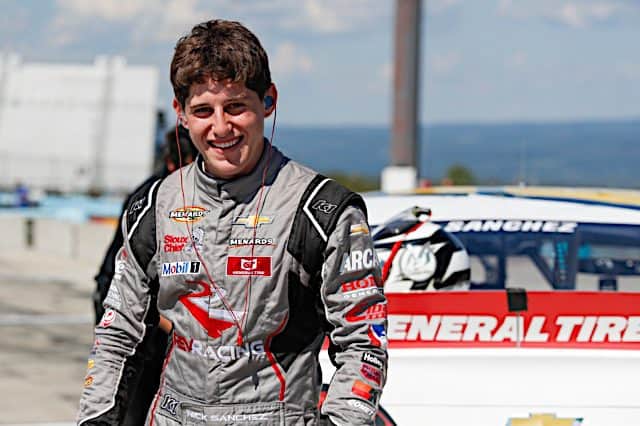 On Friday (Aug. 19), Brandon Jones took advantage of contact between Sammy Smith and Taylor Gray to win at Watkins Glen for his third ARCA victory this season and his eighth overall.

Two days later, Jesse Love led every lap en route to winning the Atlas 100 at the Illinois State Fairgrounds, also referred to as the Springfield Mile. Love picked up his first ARCA win this season and his second career main series victory, too.

After those two races, Nick Sanchez has opened a double-digit lead over the competition. Unofficially, Sanchez leads Daniel Dye by 13 points and his Rev Racing teammate Rajah Caruth by 17. Fourth place Greg Van Alst and fifth place Toni Breidinger are both more than a full race worth of points behind the top three.

With the ARCA road course races complete and one dirt track race this season in the history books, how did the contenders fare after those two events?

Sanchez now holds the largest points lead all season. No, his lead is not insurmountable, but Sanchez has finally emerged as the championship favorite.

Sanchez wheeled his No. 2 Chevrolet to a runner-up finish at Watkins Glen, followed by a fifth-place finish at the Springfield Mile. In both events, Sanchez bested Dye and Caruth, and he now has the best average finishing position among those three.

Sanchez won at Michigan International Speedway with some outstanding defensive driving. Can he hold Dye and Caruth off for six more races en route to winning the ARCA championship?

Sammy Smith had the best car at Watkins Glen, leading 39 of the 41 laps. Yet the last lap contact netted him a fifth-place finish. In his first dirt track event, Smith finished fourth. In 13 career ARCA starts, Smith has two wins and both 11 top fives and top 10s. In short, Smith has finished inside the top five a staggering 84.6% of his career.

In addition to that astonishing statistic, Smith further demonstrated his talent as he drove an impressive NASCAR Xfinity Series race at Watkins Glen International.

The reigning ARCA Menards Series East champion shows no signs of slowing down, either. With two races left on the East schedule, Smith has a 27-point lead in those standings as the next ARCA event at the Milwaukee Mile is a combination event with the main and East series.

Although bad luck relegated Dye to some struggles earlier this year, he quietly finished fourth and seventh, respectively, in the two ARCA events this past weekend. As a result, Dye jumped to second in the points. On the strength of Dye’s eight straight top-10 finishes, including five top fives among those, he now leads ARCA with 12 top-10 finishes.

To usurp Sanchez as the points leader, Dye must lead more laps and win races. Dye only has led in two ARCA events and still is winless this year, too.

On paper, Taylor Gray scoring a pair of eighth place finishes this race weekend looks good, but not great to the naked eye. After all, Gray is tied for the most ARCA victories this season with three. Yet the end results of this race weekend certainly don’t do Gray nor his David Gilliland Racing team justice.

At Watkins Glen, Gray had the second-best racecar. Right before the final yellow flag flew, Gray made his move, momentarily nabbing the lead away from Smith. Yet the restart order was set via the most recent scoring loop, which put Gray back in second place. Undeterred, he tried another race-winning move, but with a nudge from Jones, Gray made contact with Smith and neither driver went to victory lane.

At the Springfield Mile, Gray started 17th after the lineup was set via owners’ points due to the cancellation of qualifying. Gray rapidly drove up into the top five, reaching third place at the lone competition caution. But as the clock wound down on the time-constrained race, Gray’s No. 17 Ford suffered a mechanical problem, and he faded back to an eighth-place finish.

Broken right rear shock mount late in the race took away a top-five. On to Milwaukee! pic.twitter.com/QAKj31gv7N

Gray may take some solace in his eighth top-10 finish in only nine main ARCA starts this season, but he probably wishes his finishes were more indicative of the speed in his No. 17.

After his consistency kept him in the points lead for several races, Caruth’s inability to lead laps, finish inside the top five and ultimately capture his first ARCA victory have cost him the points lead as well as second place.

During the Watkins Glen race, Caruth’s No. 6 blew a tire, and he fell one lap down. Via the lucky dog, he returned to the lead lap, but he never found the speed to run up front. Instead, he finished 11th, snapping his six-race top-10 finishes streak.

At the Springfield Mile, Caruth piloted his No. 6 to a respectable sixth-place finish. After all, it was his first stock car dirt track event. Unfortunately for Caruth, the championship contending trio all drove respectable races, in the first ARCA dirt track for them all too.

By no means is Caruth out of the ARCA title contention. After all, 17 points over the final six races average out to only three points per race he must gain on both Sanchez and Dye. Therefore, Caruth must find some race-winning speed to lead laps, win a race — or more — and finish ahead of his two fellow championship contenders.

The Milwaukee Mile hosts ARCA in the Sprecher 150. As mentioned, the 150-lap race is a combination race for the main series and the East series. The green flag will fly at 3 p.m. ET with TV coverage provided by MAVTV Motorsports Network and available on FloRacing.