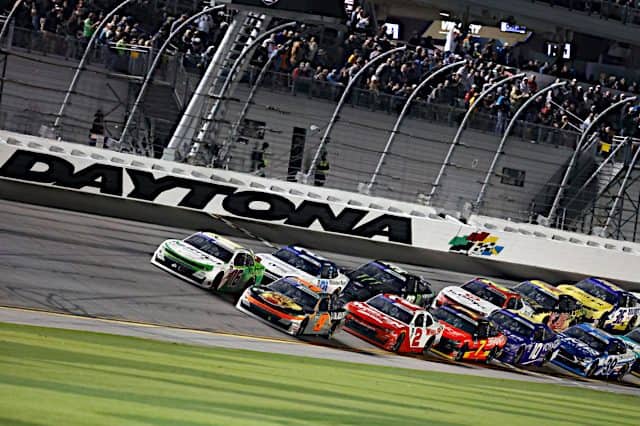 The NASCAR Xfinity Series hits the sandy beaches of Daytona for the Wawa 250 at Daytona International Speedway this weekend.

Only four races remain in the regular season before the playoffs begin on Sept. 24 at Texas Motor Speedway.

Natalie Decker will attempt to make her fourth start of 2022 with BJ McLeod Motorsports in the No. 5 Ford. Decker has entered six events this season between RSS Racing and MBM Motorsports, failing to qualify for three of those.

Joe Graf Jr. will be back in the No. 07 GTECHNIQ Ford for SS Green Light Racing w/Jeff Lefcourt. David Starr will be in the team’s No. 08 Ford.

Kaulig Racing will attempt to enter four cars in a single race for the first time, with NASCAR Cup Series regular Justin Haley piloting the No. 14 DaaBIN Store Chevrolet. It marks Haley’s first series attempt since the season finale at Phoenix Raceway in 2021.

A father-son duo will attempt to compete in Sam Hunt Racing’s cars this weekend. Joe Nemechek will be in the No. 24 Fleetwing Toyota, with son John Hunter Nemechek in the No. 26 Freedom 13 Toyota.

CJ McLaughlin will attempt to make his seventh start of 2022 in the No. 28 Sci Aps Ford for RSS Racing. McLaughlin made his most recent start at Michigan International Speedway.

Kyle Sieg looks to make his first start since Michigan. Sieg will pilot the No. 38 Trouble spirits/Mafe Ford for RSS Racing.

Sage Karam returns to the No. 44 Clermont Lakes/Alt-Tab Capital Chevrolet for Alpha Prime Motorsports, while Caesar Bacarella attempts to qualify the No. 45 Clear Cryptos Chevrolet for the team.

Mike Harmon Racing brings Brennan Poole back to the No. 47 Chevrolet. Poole last competed at Atlanta Motor Speedway in July, failing to qualify at both Pocono Raceway and Michigan since then.

Ricky Stenhouse Jr. attempts to make his second start of the year with Big Machine Racing in the No. 48 Big Machine Spiked Coolers Chevrolet. Stenhouse competed at Pocono Raceway with the team in July. He won the Cup summer race at Daytona in 2017.

Ronnie Bassett Jr. attempts to make the race in the No. 77 Jerry Hunt Supercenter Chevrolet for Bassett Racing. Bassett has made one start in 2022, failing to qualify in three other attempts.

Josh Williams reunites with DGM Racing in the No. 92 Alloy Employer Services Chevrolet. Williams, who spent five seasons with DGM, had competed in all of his 2022 starts with BJMM.