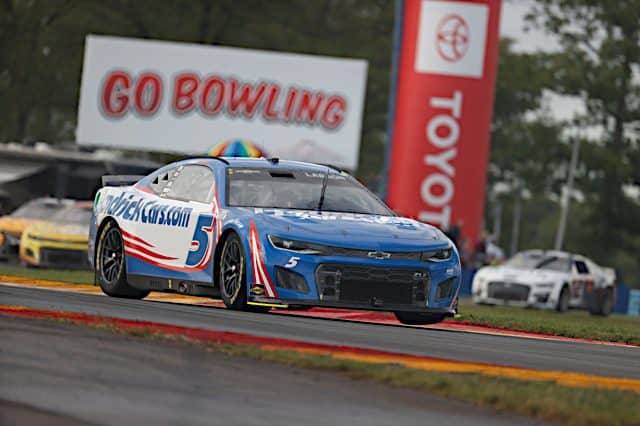 It looked like Kyle Larson was going to have to settle for second as the Go Bowling at the Glen entered the final laps at Watkins Glen International. The final stage featured a lot of green-flag racing, and teammate Chase Elliott had a comfortable lead over Larson.

Until the caution flew and flew again. The final restart came with just five laps to go, and Larson was ready for Elliott’s attempt to get the jump going into the first turn. Elliott was less ready for Larson’s aggressive counter. Larson took advantage to sail to the weekend sweep, holding off a charging AJ Allmendinger to the checkered flag.

It was a boost Larson needed. After winning 10 races last season, he had just one in 2022 prior to Sunday (Aug. 21), and that was in February at Auto Club Speedway. Sunday’s win doesn’t necessarily make Larson a favorite to repeat his 2021 title, but it does give him and the No. 5 Hendrick Motorsports team a little momentum heading into the title run.

And don’t forget Front Row Motorsports. Michael McDowell was strong at Watkins Glen, leading 14 laps and finishing sixth. He’s got confidence on his side after three top-eight finishes in the last five races. McDowell isn’t just an excellent road racer, though, he’s also a threat on the superspeedways, and with Daytona International Speedway on the docket next week, don’t count out a last-minute playoff bid.

Would it or wouldn’t it?

We’re talking about rain on race day and it did. After a delay of about an hour due to lightning, cars rolled off with rain tires in a steady rain, but it wasn’t long before NASCAR made the wise decision to delay the start further when standing water proved to be an issue in several locations. The rain let up, and by the time the track was safe to run, it stopped.

Fans seem to love racing in the rain (or at least the carnage it often brings), but is it really in the best interest of the sport? While running on the scheduled day has a lot of appeal for any who may not be able to return the next day for a make up, how pleasant is the experience for the fans at the track? Sitting in wet clothes for several hours doesn’t really seem like a good time.

And really, the racing isn’t great. When the track dries, it’s fine, but remember the mess at Circuit of the Americas last year?

That was dangerous and completely unnecessary. If that’s why people like rain races, it’s time to rethink some priorities.

Pole winner Elliott started up front, led a race-high 29 laps and was leading on the final restart of the day. Elliott elected to start on the outside of Larson to get the angle into turn 1, but Larson’s dive bomb and slide meant that Elliott slid wide, losing positions in the process. He finished a decidedly bitter fourth.

Visiting F1 champ Kimi Raikkonen had rookie stripes on the bumper of the car that Daniel Suarez took to victory lane at Sonoma Raceway earlier this year, but he didn’t race like a rookie, working his way into the top 10 to kick off stage two. Raikkonen climbed as high as eighth before a real estate battle in the bus stop ended his day in the tire barrier. He finished 37th but schooled some Cup veterans before his exit. With the No. 91 returning in 2023 for select races, might we see Raikkonen again down the road? It would be good for the sport to have him run a few races and bring some new eyes to NASCAR. The race was shown live in Finland to keep up with their native son, and Raikkonen’s popularity can bring viewers.

Playoff hopeful Ryan Blaney started the day as the lone driver still clinging to a playoff spot on points. Fuel pressure issues in stage one kept him at the back of the field, but Blaney picked up steam in stage two and entered the top 10 by halfway. He got shuffled around in the second half and came home 24th.

Xfinity point leader Allmendinger finished second to Larson on Saturday, but an early spin cast some doubt on his chances at snookering the Cup teams on Sunday. But Allmendinger drove back to within striking distance,  running 10th by the end of stage one and eventually setting up in third on the final restart and jumping on Elliott’s slide. He pursued Larson aggressively, but ultimately the race was decided by Larson’s advantage in horsepower and Allmendinger had to settle for the runner-up spot.

Larson worked with teammate William Byron on Saturday in the Sonoco Go Rewards 200 at the Glen, staying out of Byron’s way when he was racing Ty Gibbs for the win. That is, until Gibbs and Byron both spun in front of him, opening the door for Larson’s win in that race.

He also didn’t interfere with Elliott on Sunday when Elliott was racing with another driver. But on the final restart, all bets were off. Larson’s bold move to the inside of Elliott, counting on the “eight tires is better than four” theory to help to No. 5 stick, wasn’t in any way designed to wreck Elliott (and it didn’t). Elliott was diplomatic after the race but it was obvious he wasn’t happy with his treatment from his teammate.

Larson asserted afterward that while he wasn’t proud of the move, there was no ill intent.

This incident is a bit different than some of the others this season because it happened between teammates. It’s unlikely that Elliott will take a cheap shot at Larson because there’s too much at stake with the playoffs looming large. Plus team owner Rick Hendrick won’t take kindly to his drivers sniping at each other on track during the playoffs, so it’s likely that the fireworks have fizzled. Elliott may not help Larson from here on out, but he probably won’t hurt him, either.

One to go. The white flag is flying on the Cup Series regular season, but it’s Daytona standing between the field and the playoff cutoff, with all of the mayhem that a superspeedway usually provides.

That means the playoff field is far from set. Since Daytona became the cutoff race in 2020, we’ve seen one driver squeak in last minute as Byron triggered a late crash in 2020 that gave Byron the win and cost teammate Jimmie Johnson a playoff spot for the first time in his career in the seven-time champion’s final season.

Last year, Blaney took the win, holding off Bubba Wallace. Blaney had already landed a playoff berth, so nothing changed hands, but Wallace almost made it happen at the eleventh hour.

Wallace is among a group of drivers hoping to make a banzai move for the playoffs this year, but he’s not alone. Not by a long shot.

How… many former Daytona winners take to the track in a final playoff bid?

If you count winners in qualifying, non-points or other series, it’s a whopping 10.

While a surprise winner is absolutely in the realm of possibility, Here’s a group who’ve already raced to the front at the superspeedway:

Jones also won the 2020 Clash. There were only 4 or 5 other cars running at the end, but it was still a win, and it was his second at Daytona.

Wow, that last section really puts into perspective just how big of a crapshoot Daytona races are (I’m sure Talladega has a similar list). What a perfect race to determine those who make the playoffs.