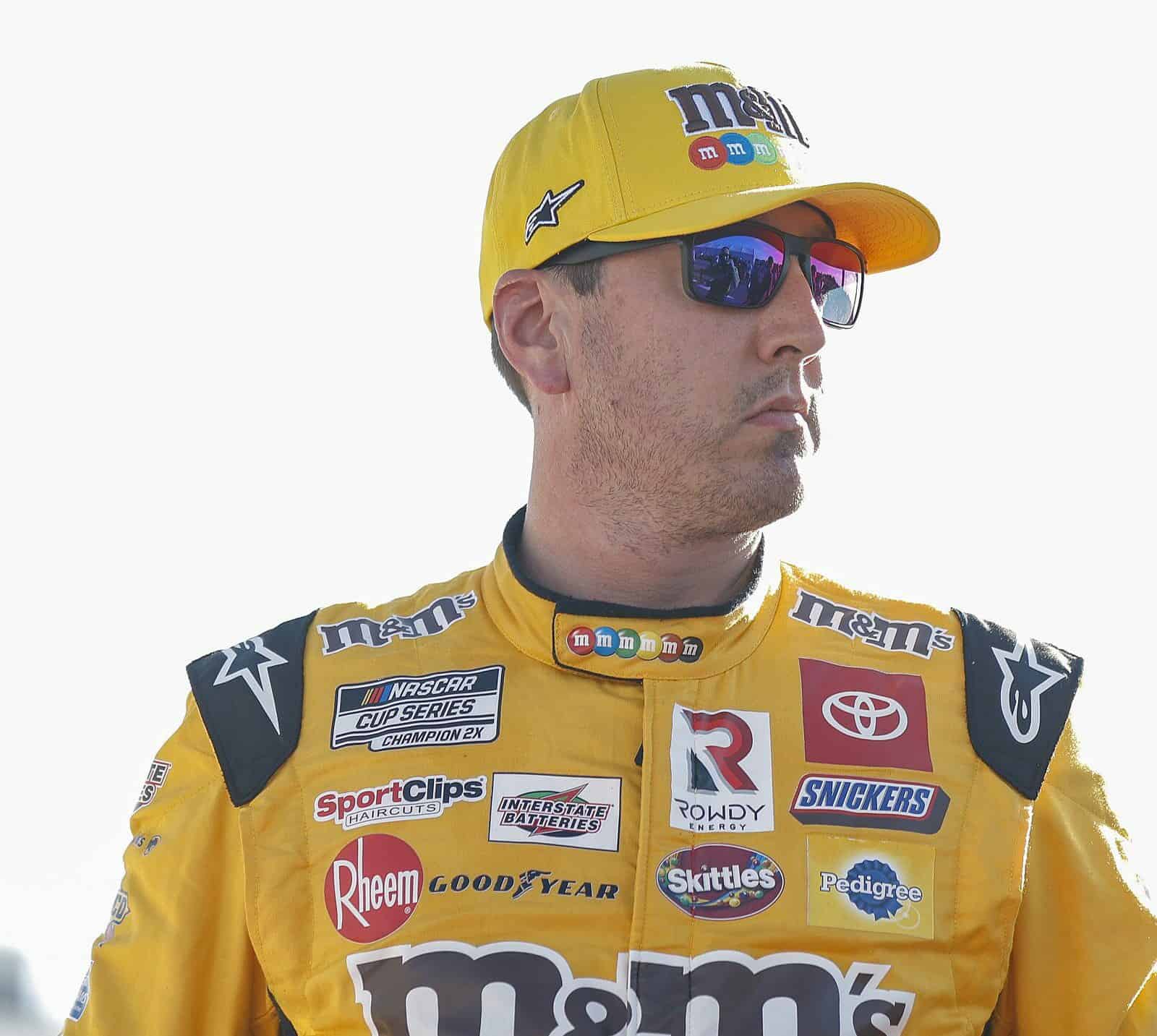 Listening to the wind of changeAn August summer night […]

The first signs of trouble came in April at Talladega Superspeedway.

The Joe Gibbs Racing driver of going on 15 years was short and vaguely to the point as he answered questions in the track’s media center.

What was his desired time frame for setting his 2023 plans?

“Yesterday,” Busch said. “I’m not getting antsy about it. If it happens, it happens. If it don’t, it don’t. Goodbye.”

Was leaving JGR a possibility?

Had he been talking to his team owner?

“Not my problem,” Busch said. “Got to sell it. If you don’t sell it, then nothing to have.”

So everything depends on a sponsor?

In late 2021 Mars, Inc., Busch’s primary sponsor at JGR since 2008, announced it would be leaving NASCAR as a sponsor at the end of 2022. That coincided with the end of Busch’s current contract.

Based on reporting in the last four months, in hindsight, it’s possible that, in the time frame of Busch’s Talladega media availability, a potential new sponsor for Busch, a technology company called Oracle, had just fallen through.

In the months since, no $20 million “unicorn” of a sponsor — as Busch said last month at Indianapolis Motor Speedway — has materialized.

The swirling gusts of a potential change in scenery for Busch increased significantly in July.

It was at Indy that the two-time NASCAR Cup Series champion said that his “first goal” was staying with JGR. He had settled into the reality that he’d likely have to compete for less than his market value.

“I’m willing to take concessions,” Busch said. “Whatever that comes to be, obviously it’s a negotiation.”

“We’ve got some tremendously heavy lifting in front of us,” Wilson said.

On Aug. 12, two days after the 15th anniversary of the announcement that Busch would join JGR, Wilson appeared on SiriusXM NASCAR Radio.

Wilson said there was “absolutely a chance” that Toyota would be able to keep Busch under its roof.

A “chance” doesn’t exactly instill someone with confidence.

💭"There's absolutely a chance that we can keep him […] there's nothing that's not on the table."

Four months after Talladega, what started out as an energetic easterly wind feels like it has become a gale force blowing Busch toward a new racing home.

During last weekend’s visit to Watkins Glen International, Busch said this spring and summer have been “hard as hell” to navigate.

He compared his current situation to what he experienced in 2007, when he moved from Hendrick Motorsports to JGR.

“The first time I went through this was 15 years ago, and it was a learning experience,” Busch said. “It was hard then too, but it was nothing like now. Then it was just me, myself and I. I didn’t have [wife] Samantha, I didn’t have a son. I didn’t have a daughter.

“If you look at each aspect of everything of my life, which some of you may not know or may not fully know, is there’s just a lot. So trying to take care of all those pieces and make sure everything goes as it was or as it has been the last few years would certainly be nice.”

Busch said he hadn’t been told yet that he definitely wouldn’t be returning to JGR in 2023. However, Busch said, “There’s a big change coming.”

“Is it worth it to go run around and not have an opportunity to win right away versus building something versus jumping in something that can win?” Busch said. “All those questions are certainly being weighed out. And so, again, that’s also why it’s not so simple and so easy.

“So, thankfully there are opportunities out there. There are Cup jobs available. But again, it will not look the same as what it has for the last 15 years.”

Whatever Busch’s future looks like — competing for JGR, 23XI Racing, Kaulig Racing or (increasingly less likely) Stewart-Haas Racing — brace yourself for a change.

If Denny Hamlin had not started 23X1, Busch may have had the option of doing the same thing with Toyota, but I doubt Toyota would have any desire in starting another team.

Actually, I’m surprised that Mars (M&M) stayed with him as long as they did. I’m sure he can schmooze the sponsors with the best of them, but in many interviews at the race track, he can be a real a$$.

I think Toyota could afford starting another Cup team. They spend so much money in driver development in several series, that if they backed that down a bit, it’s doable. They only have 7 full time teams, and have stated before that they’d like to have more, because they don’t have enough Cup seats for drivers that they are developing. Yes, not all drivers in the development programs are going to be Cup drivers, but they’ve had a fairly good track record of mining some really good talent. I think that the major roadblock for Busch being a Cup team owner is Kyle himself. Yes, he does a great job with his truck series, but let’s face it, funding a truck team is a drop in the bucket to a Cup team. Kyle the driver is great. Kyle the rep for a multimillion dollar sponsor, not nearly as good. Like Ron said in another post, “Actually, I’m surprised that Mars (M&M) stayed with him as long as they did”.
Look at the new team owners over the last 3 seasons. Trackhouse, Kaulig, & 23X1 do not operate like legacy teams do. Kyle literally has grown up driving for teams that have only operated the old way. Is Kyle capable of that dramatic of change? I don’t know. But behaving the way that he has over the last 4 months didn’t endear him to many people/corporations that have that kind of money to spend. I love his skills behind the wheel, but hate listening to him being interviewed at any time. Rarely does he have much to say that isn’t negative.

One other thing concerning JGR. How long will Gibbs/FedEX put up with Hamlin being more concerned with 23XI team than JGR?? I will be surprised if Hamlin is still driving for JGR after the 2023 season. 23XI is going to need a couple new charters. That’s actually the seat I originally thought Ty Gibbs would fill. Now it looks more and more like he will fill the flagship #18, just maybe a year earlier than planned. Is it too soon? Probably, but Joe Gibbs will tolerate the growing pains because it’s his grandson. Just look how long Childress has done it with the Dillon boys. Tyler Reddick has shown that Childress cars can win, and Childress was the first team to build the Next Gen car.
When Ty Gibbs was still running ARCA, Joe was at nearly all of those races, no matter how far away the races were from the Cup races. Short of Ty getting injured permanently, nothing is going to stop him from driving for grandpa. I think he has real talent, but he sure has some growing up to do.
Even with Cole Custer’s dad running the show at SHR, I don’t know how Cole is still in Cup. It seems that the Xfinity series is where he belongs. Briscoe appears to be the better driver of the two, and he’s been able to bring sponsors along from the Xfinity series. Almirola is going to race in 2023 now, and I’m betting it’s because Smithfield really wants him. I wonder if Smithfield was asked to sponsor Custer, and didn’t like the fact that he doesn’t run upfront very much. I wonder how long Gene Haas will want to continue self funding Cole. So if Almirola does retire next year, will Smithfield stay with SHR if they don’t get a driver that they like? Not Likely.

I think the only reason SHR wanted to keep Almirola for another year was because that was the only way the checks would keep coming from Smithfield. I am guessing that it doesn’t matter who replaces Almirola, Smithfield is done when he retires.

I agree about Smithfield money. I bet that Jeff Gordon is trying to figure out some innovative way to get Kyle Busch under the HMS umbrella, satellite or something. Jeff was drooling at the chance to get Larson and he did. I know Kyle was with HMS before but Jeff has to be staying awake at night figuring out a way to get a top notch blue chip racer who still hates to lose. I’d love to see it happen.

Think about Hamlin going against Kyle in a Hendrick built car. Denny would need to see bubba’s shrink daily. lololol

I would be surprised to see Busch go back to HMS. Too much bad blood and a feeling of been there done that. Maybe I am in the minority but I believe Kyle’s best years are behind him, but I’d never count him out.

Kyle B has the kind of talent to drive for HMS, but not the right attitude/business sense outside the car (I know he runs the truck team, so he has some business sense, so maybe he works better as a behind the scenes owner and not the sponsor/face of a marketing campaign?). Anyway, I doubt Gordon is even thinking about Kyle B. Why would he? He already has two championship contending drivers in Kyle L and Chase. Not only that, William and Alex are right with (next 2 positions behind) Kyle B in the points. And they already have sponsors. So what would HMS really gain?

With only a handful of competitive years left in him, it seems the liability outweighs the reward. And that’s where the business end comes in – if Kyle had spent the last 20 years building business relationships and learning to control himself outside the car for the cameras and sponsor marketing depts, he might have sponsor $$ in hand that would land him another top tier ride.

Rich
Reply to  Ron B.

If JGR can’t find a sponsor for Kyle what chance does another team have to find one. From the latest comments sounds like Kyle might be going the JJ route and not be in NASCAR next year.