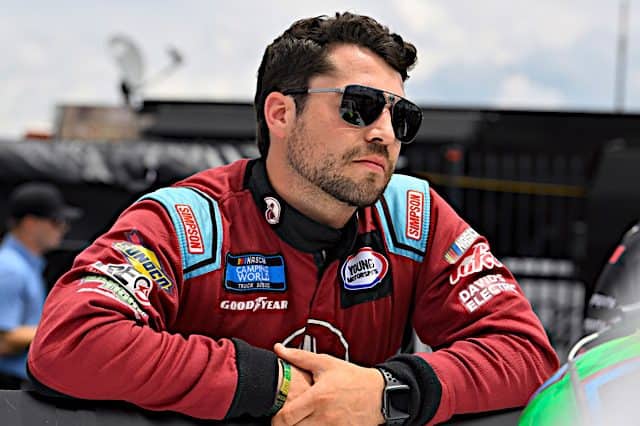 Every NASCAR driver dreams of making it to the top level, but everyone has a different path of rising through the ranks.

In order to stay in the sport, drivers often have to piece together deals and rides in order to keep their name out there. This is what 25-year-old Jesse Little has done in the last three seasons, and he has since become an established driver in the NASCAR Xfinity and NASCAR Camping World Truck series garages. He currently races part time in the Truck Series, but he looks to work his way up into full-time roles for the future.

Little comes from a racing family, as his father, Chad, scored six Xfinity Series wins in 1995 and a runner-up finish in the Cup Series’ race at Texas Motor Speedway in 1998. The younger Little began racing early in his childhood and, in the beginning, viewed it as a hobby. Eventually, he began to see it as a possible career.

“I grew up doing it, and it was fun,” Little told Frontstretch. “But it wasn’t until I was about, I want to say 10 or 11 [years old], where I had a little bit of success doing it and I was also growing up just enough to where I realized I’m good at this. I enjoy it. I’m enjoying it more, and maybe this is something much more serious.”

It takes a team to be successful in auto racing, and Little credits his father and the rest of his family for supporting him and giving him knowledge to help improve as a racecar driver.

“Extremely [important],” Little said. “For me, [the knowledge and support of family] was probably the main reason I’ve been able to have somewhat of a presence the last five, six, seven years in the national series.

“I think my dad was extremely helpful on the physical side, supportive of the teams and financial burdens and stuff like that. And then the rest of my family was extremely supportive when it came to running well or making mistakes and learning from it.”

Little is currently focused on finding a full-time home in NASCAR, but he has also had fun watching and competing in other forms of auto racing. Earlier this year, he was able to compete in the Chili Bowl Nationals, one of the most prestigious midget races on the calendar.

“I’ve become a big, big supporter of the dirt racing world and more specifically the open wheel stuff, dirt midgets and dirt cars,” Little said. “I kind of slowly got into it. I had a couple buddies that came from that side, and I’ve just really, thoroughly enjoyed getting more and more involved with it. I went and ran the Chili Bowl back in January and just had an absolute blast. That was something that only made my itch [to race dirt] scratch more.”

Little has also been thankful for the opportunities he has been given in NASCAR, and he is happy to have carved a career for himself in the sport since his Truck Series debut in 2015.

“It has been extremely rewarding for me,” Little said. “It’s been a lot of hard work and grinding and positioning myself in certain spots to take advantage of it and the opportunities that have been presented. And to still be here and to be somewhat competitive, I think is the most important thing.”

From 2015-19, Little competed in the Truck Series for a team that was co-owned by his father and his uncle, Jason Little. In 2020, Little moved up to the Xfinity Series full-time for JD Motorsports. In his first full-time campaign in NASCAR’s top three divisions, Little scored a best finish of 10th on two occasions.

After running a majority of the Xfinity season in 2021 for BJ McLeod Motorsports, Little returned to the Truck Series for a part-time schedule with Young’s Motorsports in 2022. In 11 starts this season, Little has recorded one top-10 finish, a sixth-place effort at Daytona International Speedway. That tied his career-best performance in the series, a finish that he had previously equaled back in 2018 at Iowa Speedway.

“[The sixth-place finish] kind of allowed us to take a deep breath and just enjoy the first third, first half of the year,” Little said. “We knew our speed was there, we knew we were capable of putting finishes together, we didn’t have anything silly happen or fall apart.

“It helped the chemistry of the team and helped put things together. We’ve been trying to consistently build back to that, and I knew we’re not too far off from cresting that hill that puts us right in that next category.”

In 2018, Little made two starts in the NASCAR Cup Series — one with Premium Motorsports at Kentucky Speedway and one with Gaunt Brothers Racing at Bristol Motor Speedway — recording 35th-place finishes in both. He would love to make it back to the Cup Series, but he knows that there is a long and winding road ahead.

“I would certainly love to [go to Cup],” Little said. “More likely than not the path to get there is to be successful in Trucks, successful in Xfinity and go Cup racing. I certainly am trying, and I’m certainly working hard at it. Hopefully, I’ll be able to dot some i’s, cross some t’s and get over some hurdles that will allow me to be there.”

For now, Little is determined to have a strong finish to the 2022 season and to secure plans for 2023. While his contract status for next year is unknown, Little says that his primary focus at the moment is making the most out of his remaining opportunities in the No. 02 truck this season.

“There’s so much up in the air [about 2023], but I sure hope I am [back],” Little said. “It’s early, and while I know it’s the silly season for Cup and some of the bigger Xfinity guys, for us in the Truck Series, we’re still in August. That’s kind of how we look at it, and I’m having a lot of fun with Tyler [Young] and his family and the team itself. “