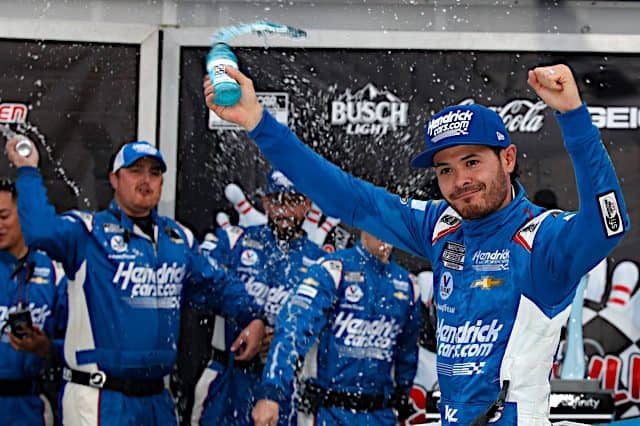 That’s what makes this so much fun.

While Kyle Larson hasn’t had the 10-win monster of a season he had in 2021, he’s still second in regular-season points and could very well be lifting the championship trophy by November. The fact remains, however, that both of his wins have come after late-race contact with his Hendrick Motorsports teammate, 2022 regular-season champion and this season’s only four-time winner, Chase Elliott, most recently on a restart with five laps to go at Watkins Glen International.

Everything changed on this restart. pic.twitter.com/TAVg0kek8r

Now, it is tough to assess the temperature inside HMS at the moment. Post-race, Elliott offered tight-lipped props:

Perhaps indicating some time spent at the Kyle Busch school of passive aggression, nobody who heard that line had any doubt what Elliott really meant.

Oh, to be a fly on the wall during Monday morning’s Hendrick competition meeting, the meeting Larson told Bob Pockrass he “took most of it in.”

Kyle Larson said the Hendrick Motorsports competition meeting was productive yesterday. He said he did more listening than talking. Larson: “In the end, I probably should have a little bit more respect next time.” pic.twitter.com/nQLcyOlBN1

“In the end, I probably should have more respect next time,” concluded the 2021 champion.

Will he stick to that resolution? Will Elliott show him the same respect? Who’s to say! All I know is I’ll be paying very close attention.

Like the simmering undercurrent of Ross Chastain vs. the world, the 2022 season has treated us to longer-term rivalries than we’ve seen in a while. Elliott vs. Kevin Harvick, last year’s headline-stealer, lasted only four weeks between the Bristol Night Race and the Charlotte Motor Speedway ROVAL.

Chase Elliott & Kevin Harvick's on-track feud ended with Harvick in the wall at the ROVAL, and Elliott wishing him a "merry off-season" as Elliott advanced in the playoffs while Harvick was eliminated. pic.twitter.com/DR3kltqeVT

Payback is cathartic, and after a certain point, drivers consider their vengeance reckoned and debts paid. If they don’t, NASCAR steps in before the rivalry gets really out of hand.

But Elliott isn’t allowed to pay Larson back, not in the truly cathartic sense we associate with the term. I doubt we’ll see Elliott even push the line as far as Denny Hamlin did on Chastain at Pocono Raceway. They’re teammates!

Which makes this rivalry purely psychological.

Elliott was on top of the world at the end of 2020 until Larson jumped into the de-facto lead driver role with his 10 wins and championship in 2021. Now, Elliott seems to be top dog again, but Larson isn’t just rolling over for him.

These are two of the best drivers in NASCAR right now with some of the most engaged fan bases. Either’s road to the championship leads right through the other. It will be great for the sport if the two of them just go all out trying to beat the other every week for the rest of the season.

This is going to be a fun playoffs.

Is Daytona too random for the cutoff race? Should it be moved somewhere else? -Stacy W., Independence, Mo.

I’m afraid that ship has sailed.

In three of the last four years, a driver has scored their first career win in the summer race at Daytona International Speedway. From NASCAR’s perspective, it certainly makes sense to use the World Center of Racing as the ultimate last-chance race before the playoffs.

But as we all know, the TV ratings are the most important piece of the puzzle. Considering the stakes heading down to the Sunshine State this year: two of NASCAR’s biggest names fighting for the final spot on points, but a new winner would knock them both out, plus the threat of the Big One hanging over every lap. You can’t get more ‘must-see TV’ than that.

15 drivers are currently locked into the #NASCAR playoffs, leaving one spot left at @DAYTONA.

Here's how Ryan @Blaney and @MartinTruex_Jr can make the playoffs on points — including tiebreakers — and also who still has a chance to make it in with a win. pic.twitter.com/l5Obq0eFFI

The only problem is the one to which you alluded: most in the know consider Daytona too random to play such a crucial role in determining the lineup of NASCAR’s postseason. While it is possible to get caught in someone else’s mess at any race, it’s very, very likely at Daytona.

On its own, that’s not enough for NASCAR to move the race. Yes, after 2015’s Talladega Superspeedway playoff fiasco, NASCAR bumped the wildcard pack race from the round of 12 cutoff, but that was more than five years ago. The playoffs then hadn’t quite permeated the racing culture to the same extent as they have now.

I’ll admit that it’s taken me a few years to warm up to the idea of cutoff Daytona, and so my feelings on the subject aren’t as strong as they once were. But I still would endorse moving the cutoff race elsewhere for one major reason.

The tension of a cutoff race is high-stakes points racing. Win-and-you’re-in just adds a dramatic layer of uncertainty to the whole thing. That’s the biggest success of the playoff format. With the cut line approaching, sometimes a battle for 12th is just as important as the one for the lead. It’s fantastic racing and fantastic television when it works.

The problem is, it doesn’t work at Daytona. The thrill of Daytona is constant changing of positions throughout the field and super competitive battling for the lead. An as-they-run points ticker just can’t keep up.

This year’s lone remaining points spot will make things a little easier to follow, but imagine a future three-, four- or five-way battle for the transfer positions. That’s too much going on for the broadcast to communicate.

Here’s my proposal: use Daytona as a last-second shakeup leading into the final cutoff race. Keep the superspeedway’s wild-card potential hanging over the heads of every driver on the bubble, then flip the table with one race left.

Then, with the bubble drivers suddenly in the most desperate positions of their entire season, throw them into a pressure cooker. The regular-season finale should be an event known for long green-flag runs that still allow fierce one-on-one battles throughout the field, with the threat of chaos and retaliation haunting every lap.

The cutoff race should be the greatest night of television that stock-car racing has to offer. That’s why it should be the Bristol Night Race.

Terrible time for a crapshoot race.

As I have said many times, given the current championship format, Daytona is the perfect place for the regular season finale. A crapshoot race to decide who qualifies for the playoff spots, followed by a crapshoot season finale to determine the actual champion. The common thread is crapshoot.

I’m sure the brain trust is going to move the final event to a crap shoot at Atlanta with a guaranteed GWC to pacify the network for all the duds in the previous events.

Might as well just rotate the “playoff” races between Atlanta, Daytona, and Talladega. Do 3 races at Daytona, then 3 races at Talladega, and 4 races at Atlanta. The Chumpion is whoever is left that is not concussed.

We better stop before they get any ideas!

Must be a slow news day. I’ve seen worse contact in the parking lot leaving the track. As far as the crapshoot – they might as well just be honest and make the final cut-off and all ten final races be plate races. Larson won in nearly everything he touched last year and needed a single pit-stop to be anointed champion – what a joke.

Elliott crashes in a “Big One” and his concussion means he SHOULD miss the last ten events!

Sounds like you are wishing for that which makes it a pretty douchey comment. You can do better.

I was just saying it COULD happen.