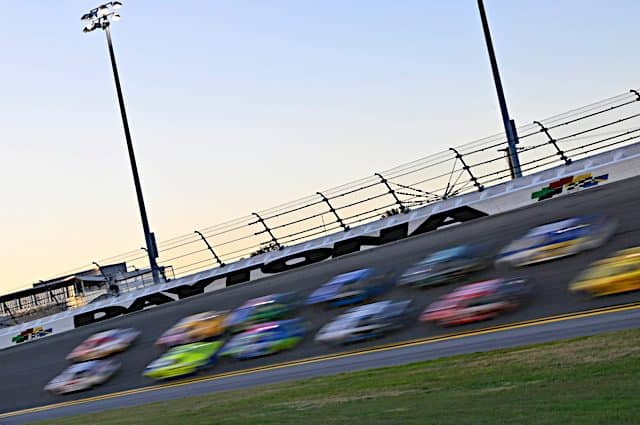 Daytona International Speedway usually presents a lot of mystery to the racing world. Thanks to the unpredictable racing at superspeedway tracks with the restrictor plate, you never know what will happen.

There always seems to be the Big One, or two or three or sometimes even more. No driver or team is safe and if you ask many around the racing world the secret to winning at Daytona or Talladega Superspeedway, they will tell you the secret is simple: luck. Just hope you are lucky enough to stay out of the crashes.

Yet, the superspeedways present an interesting concept that we really only see four or five times a year and there is an element of fun to it. However, due to the craziness of the events, many think Daytona or Talladega should not be in a crucial spot of the schedule, like Daytona has been the past couple of seasons.

So, we decided to debate it. Should Daytona be the cutoff race of NASCAR’s playoffs? Trenton Worsham and Michael Nebbia give their thoughts on the topic.

Move it Back to July 4 Weekend Where It Belongs

Daytona as the regular season finale just doesn’t work. There are quite a few reasons for that.

The end of August in Florida is right in the middle of hurricane season. Sure, Florida and its East Coast shoreline are always at a higher risk for a hurricane than say a track like Pocono Raceway, but the risk of a hurricane and the weather that precedes and/or follows them hitting the Daytona area is just too high. With it being the last week of the regular season, this creates additional problems for teams and drivers who have the playoffs just a week around the corner. Any delays to the schedule would be a delay in preparing for the championship, which is something no one wants to see.

The July 4 weekend race at Daytona had it all. It was the perfect race at the perfect date. To celebrate America’s birthday at the place where NASCAR was born just made sense, didn’t it? There’s nothing that is more American than NASCAR and its fans. There was no reason for it to move. We had an elite date on the schedule and now that’s gone because NASCAR wanted to add drama to the end of the regular season. Maybe a better playoff format can do that? I don’t know.

Plus, Daytona is a racetrack where luck is involved and the end of the regular season, where drivers and teams are going to be striving to be their best, shouldn’t come down to a racetrack where so much luck is involved in the outcome. Look what NASCAR has done to Talladega’s playoff race. They’ve moved it from a cutoff race to the second race in its respective round because drivers and teams felt it wasn’t fair that they had such a crapshoot of a race determine who advances to the next round. They felt that it would hurt the legitimacy of the playoffs.

If it doesn’t work for Talladega, why are we doing it with Daytona? I understand wanting to add drama and giving more teams a chance to make the playoffs because of the more level playing field that occurs at Daytona, but there has to be a better way than watering down the end of the regular season.

This would be like baseball saying after a 162-game season if teams are tied going into the playoffs, a three round winner take all home run derby would determine who would make the playoffs and who would go home. It’s bad enough they instituted that for their all-star game, but for the end of the regular season? Fans would find that ridiculous as they should. Yet, we’ve done it with NASCAR. I just don’t get it.

In the end, Daytona’s racing style and the hurricane climate in that part of the country in this time of year is just too much for me to be convinced this is the right spot to end the regular season. Move Daytona back to the July 4 weekend where it belongs and call it a day. – Michael Nebbia

Daytona is an iconic venue for NASCAR and has seen amazing and tragic events happen on its pavement.

The Daytona 500 has been a staple and crown jewel since 1959 and has served as the opening race since 1982 and in 1988, the July race was moved to the first weekend of the month in which fans came together to celebrate the sport and the American holiday. Traditionalists were not happy when the July Daytona event moved to become the last race before the Cup Series playoffs, but it is now better for it.

While a nighttime July 4 party sounds fun at the Florida speedway, we have two of those on the schedule already. The Memorial Day weekend in May is celebrated at Charlotte Motor Speedway for the Coca-Cola 600 and Darlington Raceway on Labor Day weekend for the Southern 500. While July 4 is very important, it also gives families time to enjoy the beach and take a vacation without having to plan around a race.

The style of Daytona also fits with the current climate of the Cup Series. The massive speedways of Daytona and Talladega have always been viewed as outliers or wild-card races in which an unsung hero such as Trevor Bayne in 2011 or the rookie Austin Cindric in 2022 can win the races. As of 2022, Atlanta Motor Speedway has earned its spot in this group. The desperation of winning to make the 16 driver field causes drivers to race differently and more aggressively than they did during the Winston Cup era or even the Chase era when Jimmie Johnson was dominating.

In 2022, there are 15 different winners and two spots remaining in which Martin Truex Jr. is on the outside looking in with Ryan Blaney holding on by threads. Putting a track like Daytona and having a new winner make it in is very exciting in itself even with fewer winners but now for 2022, the game is different.

Other drivers looking to make it are drivers like Bubba Wallace, who is known for being great at these tracks. Two runner-up finishes in the Daytona 500 and a win at Talladega in 2021 to be his first Cup win have shown he knows how to get it done. The question with someone like Wallace is would the Toyota drivers help him or Truex make it in when it’s time to push at the end.

23XI Racing owner Denny Hamlin may take his driver in the No. 23, but the rest of the Joe Gibbs Racing drivers may work with their teammate. Since manufacturers tend to work together in these races to beat the others, it is going to be something to keep an eye on who gets helped or if team orders are in place to help someone.

NASCAR implemented a playoff system to bring intense drama all season with the win-and-in format and this season is providing exactly what they want. Daytona is the wild-card race, the team that makes it into the playoffs with hopes of a super bowl run, the Cinderella driver like the previously mentioned Wallace or an even bigger outsider like Justin Haley can have a shot amongst 15 other drivers to win a championship and upset Blaney or Truex who are currently battling to make it in on points.

Daytona as a cutoff race matches the energy and drama NASCAR is going for and for this era, is a good thing. It’s OK though, in 20 years when something else changes, people will miss this era like they did the last. – Trenton Worsham

It doesn’t matter where in the regular season the Diet Coke 400 is raced, It has the same exact point value as it did in July! It is all perception.