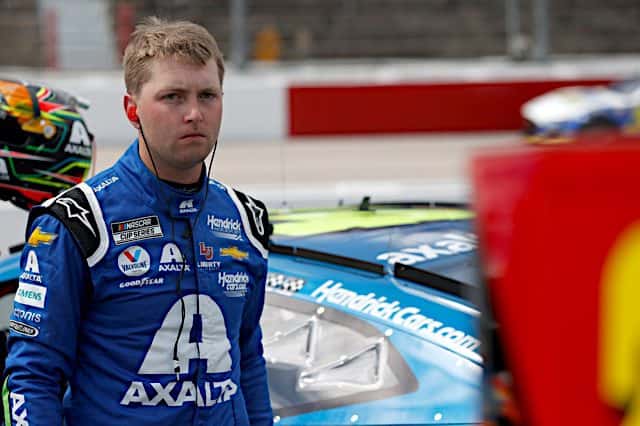 Anthony Damcott: It’s safe to say that Ryan Blaney is a lock at this point. He has enough of a lead on Martin Truex Jr. that he can afford a less-than-stellar finish at Daytona if that’s what it comes to. I’d look for Bubba Wallace to be the one who steals the last spot from his Toyota teammate, as his finishes over the last few weeks make him a contender regardless of his superspeedway experience. Look for Truex to be in attack mode the whole night to maximize his points and go for the win in the event someone like Wallace or Justin Haley is in the running when all is said in done.

Mike Neff: Wallace has shown a propensity for running well at Daytona. As long as he can keep his nose clean, he should be strong and have a decent shot to win and advance.

Stephen Stumpf: With two playoff spots up for the taking, Blaney is close to a lock on points unless he crashes out early in the race. With the final spot now coming down to Truex vs. non-winners, Truex will hold on for the 16th and final spot, as Toyota and Joe Gibbs Racing will do everything in their power to help Truex and prevent any non-winners from taking the checkered flag at the end of the night. That said, if anyone has a chance at spoiling the party, it’s Haley. He’s won four restrictor plate races in the NASCAR Xfinity Series, including two straight in the summer Daytona race. Look for him to make noise throughout the night.

See also
2-Headed Monster: Should Daytona Be the Cutoff Race for NASCAR's Playoffs?

Both William Byron and Alex Bowman continued their slumps, with each driver having only one top-10 finish over the last 10 Cup races. Are these two in jeopardy of making an early playoff exit?

Stumpf: Absolutely. William Byron looked like one of the best drivers in the first quarter of the season, but his dominant win at Martinsville Speedway feels like an eternity ago. It has been one of the worst stretches of his career since, as he has recorded just one top 10 in the 17 starts since his win at the Paperclip. If he doesn’t turn it around by Darlington Raceway, he looks to be in trouble. Alex Bowman has not had an average running position better than 10th in the last 14 races. Scoring stage points are just as important as scoring good finishes in the playoffs, and losing out on those points will lead to an early exit if the No. 48 team is unable to recapture speed in the first round.

Damcott: If I’m Bowman, I’m really worried at this juncture of the season. Bowman has won a race but hasn’t really been able to produce the results before or after that win. Byron, however, has had his moments toward the front since his last win at Martinsville. The No. 24 team needs to get the ship righted, but unlike Bowman, I see Byron making a deeper playoff run.

Neff: As I wrote last week, momentum is very real, both good and bad. While their teammates have been quite fast, Bowman and Byron have struggled. A switch in momentum could bring them to the Championship 4, but the odds do not look good.

After impressing in his Cup debut, where should Kimi Raikkonen make his next start?

Neff: Not sure how impressive it was, but Kimi Raikkonen could start anywhere he wants. Most likely Charlotte Motor Speedway is the best choice for the next race.

Stumpf: The answer to this one feels like a no-brainer: Circuit of the Americas. COTA was the site of Raikkonen’s 21st and final Formula 1 victory, and thus, it is the track where he has the most experience. If he was able to go to battle with Chase Elliott and briefly run inside the top 10 at Watkins Glen International, he would be a contender with enough experience in the Next Gen car at COTA.

Damcott: He should try his hand at the Charlotte ROVAL. He’s had experience at the Charlotte oval back in 2011, and being a road course ace, he could shine there. Where WILL he make his next start? Nowhere. This one-off opportunity was too good for him to pass up, but it seems that this was the only race he would ever do. Raikkonen is committed to retirement, and I don’t see him becoming semi-retired just to race once or twice a season in NASCAR.

AJ Allmendinger earned his fourth top 10 in just 12 Cup starts this season. If Allmendinger would return to full-time Cup competition, would he be a playoff contender?

Damcott: It’s easy to say that AJ Allmendinger would immediately be a championship contender if he ran a full Cup season because of his success in the Xfinity Series, but Kaulig Racing’s Cup program is a step behind its Xfinity program. So even though Allmendinger would probably be a factor on the road courses, he wouldn’t fare too well on the ovals until Kaulig improves its Cup program. The team really needs to focus on getting Haley in race-winning contention week in and week out before thinking about other potential full-time drivers.

Neff: Most certainly, with so many road courses on the schedule. He would be a definite threat to go deep in the playoffs.

Stumpf: He would be a playoff contender by virtue of the win-and-you’re-in format, but he would not be a championship contender. Allmendinger has made the most noise at road courses in his part-time Cup schedule this season, but he has lagged behind in his results on ovals. He would certainly be a contender on road courses, superspeedways and Martinsville if he was to return full time, but beyond that, it would take time for him to get reacclimated at the rest of the ovals in the Next Gen car.