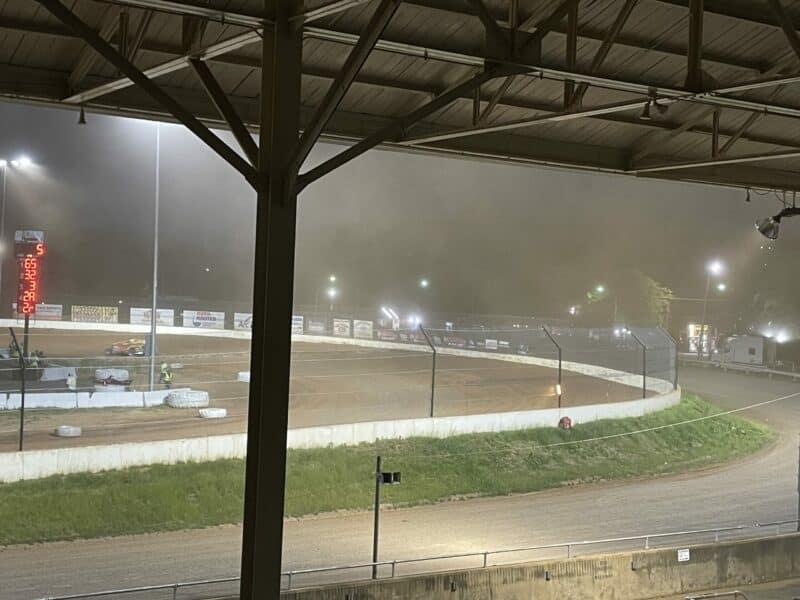 It’s no secret that the return of racing to Bloomsburg Fair Raceway has not gone as smoothly as hoped since the fairgrounds added a custom-built racetrack that was designed in part by former USAC official Levi Jones. Noise complaints, dust complaints and an erratic special events only schedule have all proved problematic for the new venue.

Wednesday night’s (Aug. 25) All-Star Circuit of Champions race at the facility was yet another rough outing for the facility. Let’s start with the race surface, which took truckloads of what was supposed to be improved clay to cut down on the dust problem.

From the naked eye, that did appear to be achieved, as the camera shots down the frontstretch didn’t look anywhere near as dusty as what I saw when I visited the track back in June. But heavy rain led to another problem: a bumpy track surface.

Mother Nature’s fault or not, it’s not a good sign when Pennsylvania Posse driver Danny Dietrich finished in the top five and STILL had bad things to say about the track surface.

Solid night at one of the worst surfaces I've ever raced on. Was elbows up tonight @bloomsburgfairraceway and came away in one piece & a 4th place finish! https://t.co/Jz475O7LcG

Now, whether it’s the track surface, a mid-week race date or something else, the reality is the crowd in the stands Wednesday night was anemic, as was the car count, with less than 20 sprints showing up for the $6,000-to-win event. That didn’t carry over to Thursday, with 27 cars showing up for the ASCoC’s event at Bridgeport Motorsports Park in New Jersey.

It’s hard to know what’s going wrong here. The track was built by experienced people, is being promoted by officials with ties to mega-successful Port Royal Speedway and has a well-maintained covered grandstand. But a return to racing more than 30 years in the making has got to go better than Wednesday.

2. Accomplishing What DIRTcar Modifieds Could Not

I’ve got to give credit for the genesis of this thought to fellow Trackchaser and Area Auto Racing News contributor Guy Smith, who I spent some time chatting with Tuesday night at a figure-8 race at Jefferson County Fairgrounds in West Virginia. The fairgrounds was absolutely PACKED, with a huge car count as well (the four-cylinder class alone had more than 60 entries).

It’s a sharp comparison to the showing some of the bigger races in the mid-Atlantic area have been drawing (see above about Bloomsburg, though that race was held at the fairgrounds, not during the fair). But talking to Smith, he observed that the Orange County Fair in New York had featured actual modified racing at no charge to those that paid to enter the fair in Orange County … and that the grandstands there were nonetheless all but empty.

I will concede that price of admission likely has something to do with the disparity, as I paid $7 to enter the Jefferson County Fair Tuesday. I don’t know of any racetrack in America featuring full-sized racecars that $7 will get you into, and with the economy the way it is price is king for a great many people right now.

But there are questions that need to be asked about how junk car races can draw thousands of people on a Tuesday night when professional sprint cars and actual racecars can’t reliably do the same.

Is the tradition of demolition derby really that strong at America’s many fairs? Is there a lack of familiarity with professional dirt racing that overwhelms strangers getting a peek? Does an hours-long program of heats, B-mains and the inevitable intermission and track work within them a turnoff to casual fans? These are questions that dirt racing in general would do well to start posing.

3. Super DIRTcar Modifieds Get the Show In

It took an extra day at Ransomville Speedway for the Super DIRTcar Series to get their feature in on Thursday, as rain interrupted the Wednesday program after preliminary action was completed. Mat Williamson finally broke through to score his first win of 2022 on the tour, closing the gap on points leader Matt Sheppard.

With Thursday night’s program at Ransomville nothing but hot laps and two features, the headliner DIRTcar event was finished just after 8:30 p.m. ET. That’s a FANTASTIC thing on a weeknight where most everyone in the grandstands have to go to work the next morning, and it made me wonder whether one of the places big-time dirt racing should consider exploring if going to a NASCAR-like format, utilizing single-car qualifying to set the field and going straight into feature racing could work.

It’s not a glove fit for dirt racing, as removing heats and other prelim races does cut down on the amount of green-flag action that a fan buying a ticket would see. It could also cause a competitive drain, discouraging racers without top-shelf engines from even bothering to show up to contest a mid-week event. That is a valid concern for track operators, who are especially dependent on the sale of pit passes to generate revenue for mid-week events where fan attendance will almost always be less than a weekend.

I’ll say this as a race fan with a 9-5, though. A mid-week program where I can reliably expect to be on the way home around 9 p.m. having seen the headliner I came to see is something I’d buy tickets for seven days a week.

One of the more striking images I noticed watching DirtVision’s Thursday night coverage of the World of Outlaws late models at Davenport Speedway in Iowa was seeing just how far removed from the racing surface the flagman was. Davenport is now configured as a quarter-mile oval within the larger half-mile that originally existed. As a result, the track flagman is actually perched on the inside of the racetrack.

Tonight, the Late Models of the #HellTour tackle the quarter-mile of Davenport Speedway. @SummitRacing Modifieds have the night off.

It’s the 6th visit in tour history to this track, which also Features a flat, half-mile around the perimeter. pic.twitter.com/wLHR8SbxkY

Looking down the frontstretch during the IMCA modified support class heats Thursday, two things were striking. One, Davenport may be the widest quarter-mile in America, and two, the flagman is acres removed from the line most racecars are running on the racing surface. To a point that I’m almost wondering if the drivers can see the flags at speed.

Granted, today’s technology would reduce the role of the flagman under any circumstances. Race control even at the dirt track level often has access to video replay and are the only voice dirt racers can hear on their one-way radios. Plus, in this day and age caution lights are all but required at various points around the track.

It begs the question that late Frontstretch alumni John Potts, a flagman for decades in the ARCA and ASA ranks across the Midwest, posed in articles even a decade ago: at what point are flagmen going to be reduced to robots, simply there to put out the flag that corresponds to the call of race control?

Already earlier this season big-time dirt racing got an example of just how insignificant the flagman has become when the ASCoC series contested Waynesfield Raceway Park in May, a clear-cut case where flagman error was treated as nothing more than a blip in governing the actual outcome of the race, despite what the series rulebook said.

Maybe Davenport and the massive distance its new layout puts between the flagstand and the race itself is just ahead of its time.

The same ASCoC I just cited for flagging issues was also active Thursday night at Bridgeport, and boy, did its race officials get one right. Calculating the race distance of 30 laps around the wide Bridgeport oval, plus extra laps spent by the sprint cars buzzing the racetrack after pre-feature work was done, it was clear that the fuel load on the racecars was going to be borderline on making it through the feature.

So, rather than risking a mid-race break or an issue, the ASCoC officials stopped the cars on track and fueled them up.

The @bridgeportspeed Track Officials had reworked the track before our 30-lap A-Main. We gave the drivers several laps to run in the track.

Before we start, our teams will be allowed to refuel their cars in an #OpenRed. Teams will have two minutes.

Seems simple enough, but given that the biggest sprint car race on the planet (Knoxville) has sullied itself with a mid-race fuel break, seeing series officials proactively take steps to get fuel out of the equation and let the feature race play itself out was a welcome sight.

It’s ironic that this display of good judgment came at the same Bridgeport facility that this preseason was toying with the idea of having a mid-race intermission for its headliner modified class to cut down on sustained engine wear. Then again, Bridgeport fortunately came to their senses and dropped that policy before it began.

6. Embracing the Villain Role at Kokomo

It wasn’t that long ago that Robert Ballou incurred the wrath of seemingly the entire USAC pit area after an ugly outing at Gas City I-69 Speedway during Indiana Sprint Week saw CJ Leary go as far as to kick him in his car under red-flag conditions.

So leave it to Ballou to bring a prop with him to Kokomo Speedway for the Sprint Car Smackdown, USAC’s biggest race since Sprint Week ended last month.

Robert Ballou rolled into Kokomo on an miniature bulldozer pic.twitter.com/EOzATCUfFA