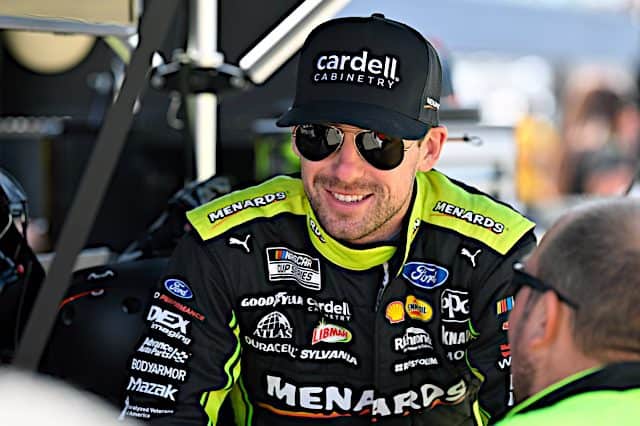 Just one race remains before the postseason as the NASCAR Cup Series returns to Daytona International Speedway for Saturday’s (Aug. 27) Coke Zero Sugar 400. With Kurt Busch withdrawing his playoff waiver, two spots remain up for grabs. Will Ryan Blaney and Martin Truex Jr. hold on, making it into the postseason on points, or will a surprise winner steal the spotlight?

Whomever ends up on top should be in your daily fantasy NASCAR DraftKings lineup. Get yourself set for the race Saturday night (7 p.m., NBC) and ready to cash in with your six-driver roster.

With those restrictions come pack racing, an abundance of passing, and more calamity than other tracks on the Cup schedule. This year’s Daytona 500 was the first race with the sport’s Next Gen chassis, dominated by Ford drivers who led 128 of the 201 laps completed. The Blue Ovals enter with three straight wins at the track with three different drivers, a streak that began at the 2021 Daytona 500 with Michael McDowell.

As 2022 is the first year with the Next Gen car, it would be wise to focus on the results of this year’s Daytona 500 as well as recent results in the 500-mile race at Talladega Superspeedway in April when setting your lineup. In addition, newly reconfigured Atlanta Motor Speedway has produced competition this year that’s similar to the pack racing found at those two facilities.

Also take a look at which drivers are competing for a playoff spot versus those solidly in the field. Those in win-or-bust mode may be more aggressive to get to the front, but that aggression could come with a cost: sparking the Big One that could devastate the pack (and your roster).

At first glance, Chase Elliott’s career stats at Daytona look pedestrian. But context is important, as all four of Elliott’s top 10s at Daytona have come in the last four races, including two runner-up finishes. In addition, Hendrick Motorsports showed its muscle at Talladega in April, putting three cars inside the top 10.

Elliott was also in a rocket ship at Atlanta Motor Speedway, his hometown track, this year. He finished sixth in March and won in July after leading a race-high 96 laps.

Keep in mind Elliott clinched the regular season championship a week in advance and currently leads all drivers with four wins in 2022. He’s NASCAR’s hottest driver at the moment, leaving it hard to bet against him becoming a top contender once again on Saturday night.

The Coke Zero Sugar 400 also comes just one week after Elliott lost last weekend’s race at Watkins Glen International on the final restart to teammate Kyle Larson. He’ll be looking to avenge that defeat on Saturday, and with a front row starting spot, he’ll be sitting pretty to do just that.

Blaney has been the man on superspeedways in recent years. He dominated and won back-to-back races at Talladega in 2019 and 2020 and then checked off Daytona with his first win at the track in last year’s Coke Zero Sugar 400.

In the 2022 Daytona 500, Blaney was one of the best cars. He led 36 laps and finished fourth at the stripe, but it could have been even better. The No. 12 Ford had a full head of steam heading to the checkered flag before Team Penske teammate Austin Cindric slammed the door on him. If Ford is the dominant manufacturer on Saturday, Blaney will be leading the charge.

Keep in mind Blaney is fighting for one of the final playoff spots, too; running up front is imperative for him to secure his spot. If you’re still feeling uncertain about his chances, teammate Joey Logano ($9,800) has also won at Daytona and experienced similar success on superspeedways.

Cindric won the Daytona 500 in February in just his second try. Any further questions?

With Ford’s recent monopoly at Daytona, this Cup rookie is a good pick for a moderate price. And his excellence at Daytona isn’t just limited to this February’s race, either. As a full-time NASCAR Xfinity Series driver, Cindric won the season opener at Daytona in 2021 while leading the most laps in the process.

Looking ahead, the freshman will likely be working with Blaney and the other Ford drivers throughout the night, providing solid support with little to lose as his playoff bid is already secured. Look for him to be a contender once again if he is able to steer clear of trouble.

At a similar price, William Byron ($8,400) would be another great pick. He’s the most recent non-Ford winner at Daytona in 2020, and he led the most laps at Atlanta in March and Talladega in April, winning the former. The only drawback in picking Byron is his subpar average finish in nine starts at Daytona (24.4).

Statistically speaking, Daytona is Bubba Wallace’s best track. It is the only one in the Cup Series where he has scored multiple top-five finishes, posting a trio of second-place results. Wallace also has three top fives in the last four starts at the 2.5-mile oval, including a runner-up finish in this year’s Daytona 500.

Even more impressive is Wallace’s average finish at Daytona. Of drivers with at least 10 starts there, Wallace has the best average finish among active drivers by far at 12.5. No one else has an average better than 15th.

Wallace continues to prove his pack racing prowess elsewhere, too. He was running second at Atlanta in March until a crash on the final lap, and remember, he scored his first Cup victory in last year’s rain-shortened race at Talladega. There’s no better place for the No. 23 23XI Racing Toyota team to be with a postseason bid hanging in the balance.

For other alternatives to Wallace at a similar price, check out Austin Dillon ($7,000). The 2018 Daytona 500 winner has the second-best average finish at Daytona (15.4) of drivers with at least 10 starts.

Brad Keselowski has been an excellent superspeedway racer throughout his career, with six wins at Talladega and one win at Daytona. But don’t let that disparity between tracks fool you: Keselowski was one of the fastest cars in Daytona Speedweeks this year. He won his Daytona 500 qualifying race and then led a race-high 67 laps in the Daytona 500 before fading to ninth.

Want another reason to pick Keselowski? The playoffs. It certainly hasn’t been the season Keselowski has expected in his first year as an owner-driver; he currently sits 27th in points after 25 races. With just one race left in the regular season, Daytona represents Keselowski’s final chance to make the postseason in 2022. If he fails to win, he will miss the playoffs for the first time since 2013.

Expect Keselowski to be hungry and determined to get the job done on Saturday night. And if February was any indication, he certainly has the car to do it.

David Ragan has the fifth-cheapest salary of all drivers entered for Saturday night’s race on DraftKings. That makes him all the more worth it as a pick. While racing full-time, Ragan scored both his Cup wins at pack ovals: Daytona (2011) and Talladega (2013).

Having retired from full-time driving at the end of the 2019 season, Ragan has since stuck around as a superspeedway specialist since 2020. But even as a part-timer, Ragan’s still able to crank out solid finishes. He finished fourth at the 2020 Daytona 500, and he picked up another top 10 at the 500 this year in eighth.

Ragan will be driving for Rick Ware Racing tomorrow night, giving him an equipment deficit compared to the rest of the field. He’ll benefit the most from an attrition-heavy race where there are fewer cars running in the lead pack at the finish. There’s a good chance of that Saturday night, especially with the chaos surrounding those final playoff spots.

At this price, Ragan is well worth the risk.