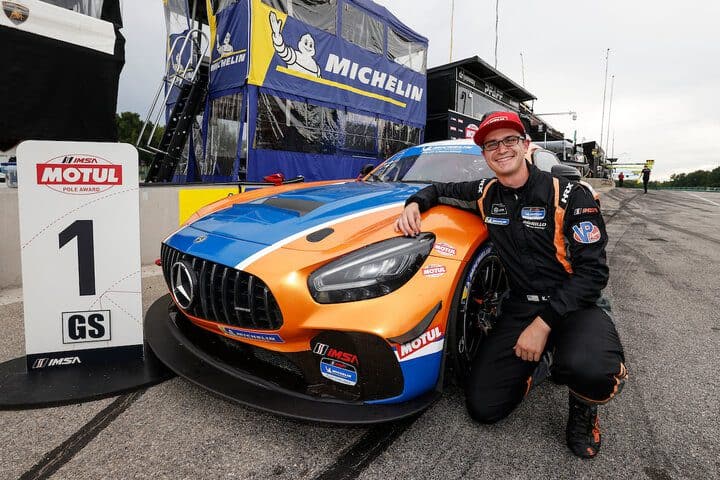 Murillo Racing’s Kenny Murillo won the pole Friday (Aug. 26) for the IMSA Michelin Pilot Challenge Virginia Is For Racing Lovers Grand Prix with a lap at 103.954 mph.  It is Murillo’s second pole of the year and the fourth of the year for Murillo Racing.

Unlike most IMSA weekends, the impetus Friday was to get out there and put down a quick lap as fast as you can.  The best laps in the Grand Sport qualifying session came in the opening five minutes, not dissimilar to practice earlier in the day, but for a different reason.  Earlier in the day, it was because of humidity and hot weather.  Here, it started to rain shortly after the session began, meaning that you had to get your laps in immediately.

Murillo’s first lap at speed was actually good enough for the pole.  He kept on trucking and set the ultimate pole lap on his second lap at speed.  That lap was a full 1.16 seconds faster than McCann Racing’s Michael McCann Jr.  Turner Motorsport’s Dillon Machavern will start third, followed by NOLASport’s Matt Travis.  KohR Motorsports’ Luca Mars will start fifth in his Ford Mustang.

Two teams failed to set times during the session.  One was the Rebel Rock Racing Chevrolet of Frank DePew, who never went out at all.  The other was the No. 56 of Jeff Mosing.  Mosing, in his return to the series after being out due to a non-racing rib injury since Sebring, crashed the No. 56 Mercedes in turn 16 to bring out the red flag.  Under IMSA rules, Mosing lost his two fastest laps for causing the red.  As a result, if the No. 56 can be repaired, Mosing will start from the rear of the class.

The Virginia Is For Racing Lovers Grand Prix is scheduled to go green at 4:40 p.m. ET Saturday afternoon.  The race will be streamed live on Peacock starting at 4:35 p.m.