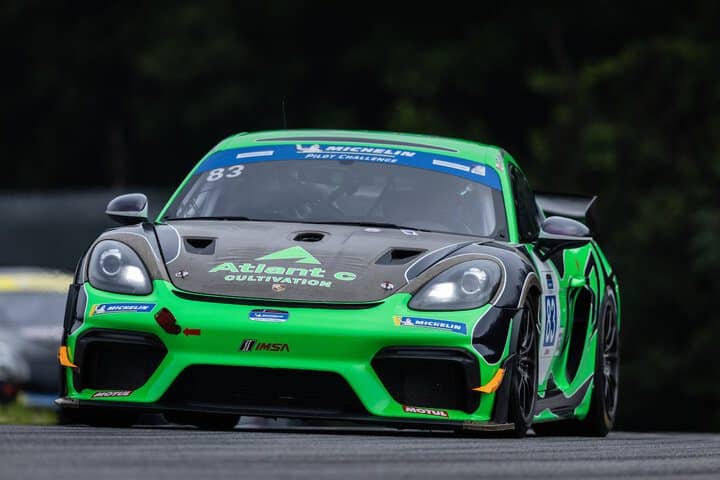 BGB Motorsports’ Spencer Pumpelly was fastest overall Friday (Aug. 26) in IMSA Michelin Pilot Challenge at VIRginia International Raceway with a lap at 103.890 mph.  The hot and humid weather on tap in Southern Virginia meant that getting out early was key to putting down the best possible time.

Michelin Pilot Challenge teams were on the track bright and early Friday morning to take on the 3.27-mile course.  BPumpelly was on his A-game from the minute the pit lane opened up.  He set the quickest lap of anyone on his first timed lap.  He then continued to improve until he turned in the quick lap for the day 12 minutes into the session.

KohR Motorsports’ Billy Johnson was sixth in his Mustang, then Turner Motorsport’s Robby Foley.  Kelly-Moss’ Alec Udell was eighth, while Matt Plumb and Kyle Marcelli rounded out the top 10.

In TCR, VGRT’s Karl Wittmer was fastest in his Honda Civic Type-R TCR with a lap at 101.293 mph, good for 20th overall.  Wittmer’s lap was .366 seconds faster than the Audi of Belgard & Techniseal Racing’s Denis Dupont.  KMW Motorsports with TMR Engineering’s Tim Lewis Jr. was third fastest in his Alfa Romeo, followed by Ryan Norman in the best of the Bryan Herta Autosport Hyundais.  Mason Filippi was fifth in class.

In the afternoon practice session, VOLT Racing’s Trent Hindman was quick early on in his Aston Martin.  However, Murillo Racing’s Kenny Murillo was able to eclipse him 16 minutes into the session.  A few laps later, Murillo set a quick lap at 103.650 mph that ended up being the best lap of the session.

Murillo’s lap was more than a half-second quicker than Johnson’s Mustang.  Hindman ended up third quickest, then the BMW of Stephen Cameron Racing’s Greg Liefooghe.  Andrews ended up fifth quickest.

McCann Racing’s Andrew Davis was sixth quickest in his Porsche, then Eric Foss in the No. 56 Mercedes for Murillo Racing.  Hugh Plumb in TeamTGM’s No. 46 Porsche was eighth, then Turner Motorsport’s Dillon Machavern.  NOLAsport’s Matt Travis was 10th fastest.

In TCR, Wittmer was once again fastest in his Honda with a lap at 100.259 mph, 20th fastest.  Wittmer’s lap was .139 seconds faster than Bryan Herta Autosport’s Harry Gottsacker.  Lewis was third, followed by Van der Steur Racing’s Tyler Gonzalez and Tyler Maxson.

Overall, the grid was reduced to 33 cars from the original 35.  KohR Motorsports has withdrawn their No. 60 Mustang.  Luca Mars has moved from the No. 60 to the No. 59 in place of Bob Michaelian this weekend.  In TCR, Road Shagger Racing’s No. 61 Audi has withdrawn as well.  Both teams had big crashes at Road America earlier this month.

Qualifying is scheduled for 5:10 p.m. Friday afternoon.  We will have a recap of the session later on here at Frontstretch.