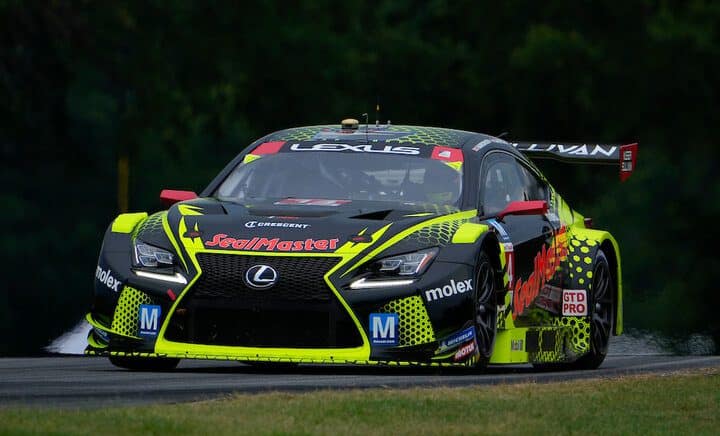 VasserSullivan’s Jack Hawksworth was fastest overall Saturday morning (Aug. 27) in IMSA WeatherTech SportsCar Championship practice at VIRginia International Raceway with a lap at 113.210 mph in his Lexus.  His lap was more than a half-second clear of the field.

The opening practice session Friday (Aug. 26) was run in a similar manner to the IMSA Michelin Pilot Challenge on-track sessions on Friday for the GTD Pro class.  The fastest laps were turned in at the beginning of the session.  Just eight minutes into the session, BMW M Team RLL’s Connor de Phillippi put his BMW M4 GT3 at the top of the chart.  A lap later, he turned in a lap at 111.905 mph.  That lap held up to be the fastest lap of the day.

In GTD, things were a little more normal.  The quick time of the session was jostled back and forth between three different teams.  With 15 minutes to go, Team Korthoff Motorsports’ Mike Skeen posted a lap at 111.744 mph to top the class at his home track.

Paul Miller Racing’s Bryan Sellers was third in GTD, followed by Winward Racing’s Philip Ellis, fresh off of a weekend sweep at Road America last weekend.  This is also Ellis’ first-ever trip to VIR.  VasserSullivan’s No. 12 Lexus for Aaron Telitz was fifth in class.

There were no red flags in the session, but there were a couple of minor incidents.  In addition to Hardwick’s spin, Magnus Racing’s John Potter spun a couple of minutes before Hardwick in turn 1 without hitting anything.

In the 90-minute second session of the weekend, it did not take long for the best laps of the session to be turned in.  Hawksworth put his Lexus on top of the charts in the opening 10 minutes.  The best lap of the weekend to this point was turned in on his fifth timed lap (fourth at speed).

Hawksworth’s lap was two-thirds of a second faster than Gunn.  Campbell was third, then de Phillippi and Antonio Garcia in the Corvette.

During the session, Hardwick spun his Porsche in the roller coaster section of the track and hit the barriers to bring out the red flag.  Hardwick was able to drive the car back to the pits for repairs.  With replacement bodywork, Heylen was able to time in 11th quickest.

At the front of the class, Rick Ware Racing’s Aidan Read turned in a lap at 112.631 mph a few minutes before Hardwick’s crash to lead the class in second overall.  Read’s lap was .092 seconds quicker than the BMW of Turner Motorsport’s Bill Auberlen.  Skeen was third, then NTe Sport’s Jaden Conwright.  VasserSullivan’s Frankie Montecalvo rounded out the top five, but had some fuel pump issues during the session that resulted in him briefly stopping on tack.

Outside of the aforementioned red flag, there were a number of additional incidents that did not stop the session.  Read’s teammate Ryan Eversley had a quick spin at turn 17 right after the red flag was withdrawn.  Read and Conwright also had their own off-course excursions.

Qualifying for the Michelin GT Challenge at VIR is scheduled to begin at 3:15 p.m. ET Saturday afternoon.  The session will be streamed live at both IMSA.com and Peacock starting at 3:10.