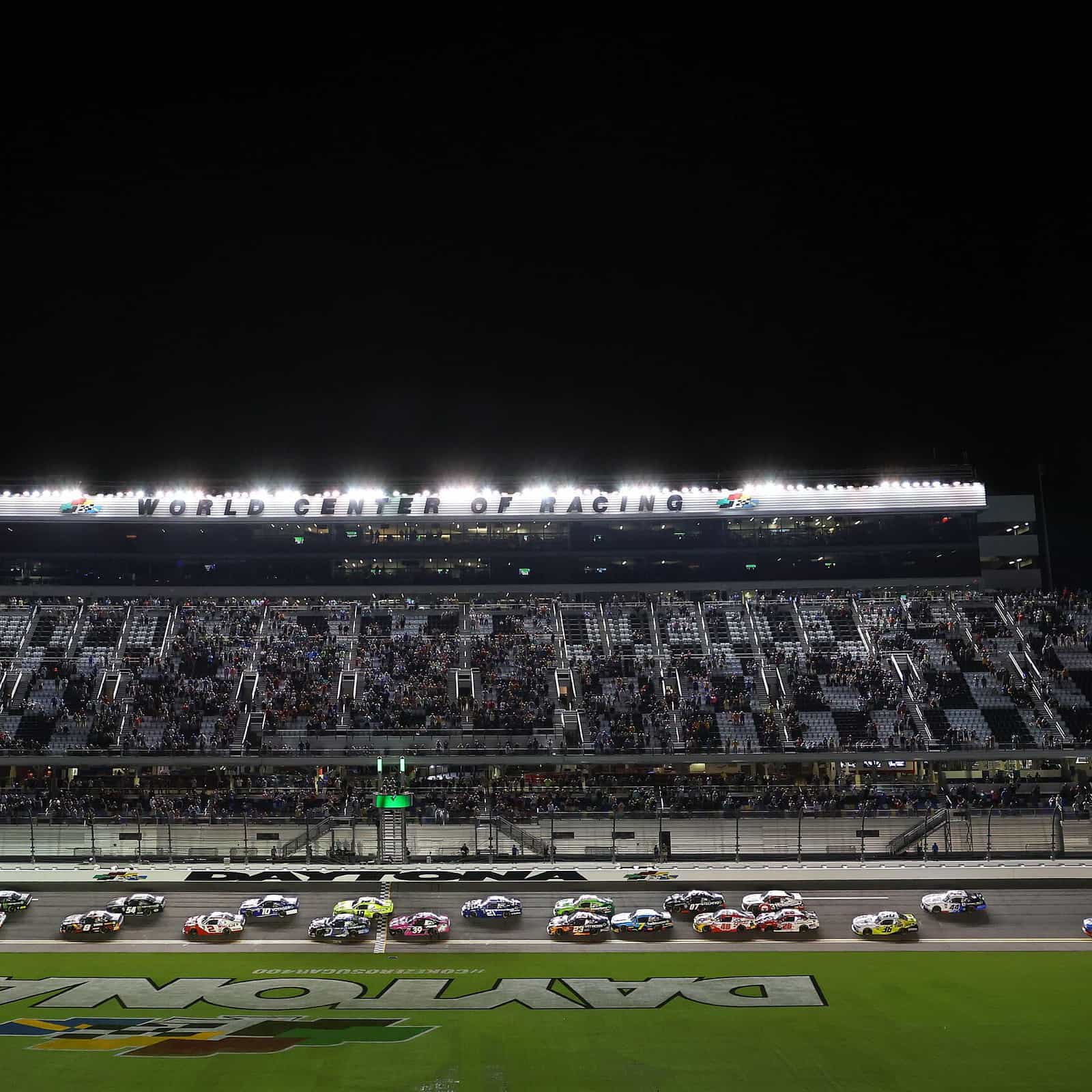 The phrase “all hell broke loose” gets thrown around a lot at Daytona International Speedway and Talladega Superspeedway.

But seriously. All hell broke loose. Pigs flew. The pace car almost won. That’s about the only ways to describe what went down during Friday night’s (Aug. 26) race.

In a NASCAR Xfinity Series race at Daytona that saw completely destroyed racecars finish inside the top 10, Jeremy Clements led just the final three laps and was out front on the final lap when the caution ended the Wawa 250 18 laps past the scheduled distance.

“I’m speechless man, I don’t even know what to say,” Clements told NBC Sports after the race. “That’s incredible, man. We were as fast as Xfinity internet at the end and it feels so good.

“We survived that big wreck back there somehow; it was like a Days of Thunder wreck. And I was like, well, if we can just keep up with these guys it would be a good day. Top five and bring this car home in one piece and that’s a good day. But wow. This is incredible. Thank you guys so much for sticking around, I know it’s late as hell. It’s time to drink a beer!”

It was Clements’ second career win in the Xfinity Series, and with the race ending in the early hours of Aug. 27 after a three-hour rain delay, the win came five years to the day of his first Xfinity Series win at Road America in 2017.

By winning, Clements locked himself into the playoffs.

It was a three-car breakaway battling for the win when the caution ended the race, and finishing right behind Clements was Timmy Hill, who recorded the best Xfinity Series finish of his career. After 118 laps, Clements and Hill were about the only cars in the race without a scratch on them.

“I was lined up behind Austin [Hill], and Austin ended up running out of gas, so I thought we may have been out of it at that point,” Hill told Frontstretch after the race. “Luckly we were able to get to the outside of him, work our way around him and ultimately draft back up to the front. Those guys got two-wide, and we found ourselves an opportunity to push Jeremy [Clements] for the win.

“For MBM [Motorsports], this is a huge deal. This is a team that on a regular basis is only competing for top 20s, so to come up here and run top five, finish second, have a shot for a win is a great morale builder.”

Finishing third in a damaged car was points leader AJ Allmendinger, who tried to make a pass for the lead heading into the final lap to no avail while Brandon Brown came back to finish fourth after suffering major damage in the second-to-last Big One of the race.

“Honestly looking back, it was my fault,” Brown dejectedly told Frontstretch after the race. “Just made the move way too early on [Clements], needed to keep [Allmendinger] on my bumper. Just going for it. It feels like everything was on the line today, a chance to race in good stuff all throughout the rest of the season. Was really riding on today, and I just wasn’t able to clutch it or pull it off.”

Sage Karam rounded out the top five in fifth for a career best finish, and he too had a heavily damaged nose from an earlier incident. Ryan Vargas scored his best career Xfinity Series finish in sixth, while Ty Gibbs finished seventh in a car that was headed to the junkyard.

Alex Labbe and JJ Yeley each recorded their second top-10 finishes of the season in eighth and ninth, respectively, while Kyle Sieg finished 10th for the first top 10 of his career.

With most of the field heavily damaged or out of the race, five of the top 11 finishers recorded career-best finishes in the Xfinity Series: Hill (second), Karam (fifth), Vargas (sixth), Sieg (10th) and Jesse Iwuji (11th).

For as chaotic as the race ended, the first 80 laps were as tame as could be. The only major incident in the first half was when Sammy Smith lost control out of turn 4 and crashed into the inside wall on lap 15 in his first career race at Daytona.

Smith’s crash and a debris caution on lap 21 were the only yellows for incident in the 70 laps, and the entirety of stage two was run without cautions.

The race began with Allmendinger leading the first four laps, but Gragson and his JR Motorsports teammates made quick work of him on lap 5. From there, JRM dominated much of the race, as the four JRM cars combined to lead 69 of the first 96 laps.

One of the only reprieves of the JRM dominance was closing laps of stage one, as Gibbs held off the Richard Childress Racing duo of Austin Hill and Sheldon Creed in the final 10 laps to score the stage win. In stage two, Anthony Alfredo led eight laps and put up a fight against Gragson and Justin Allgaier, but it was Gragson who took control of the race and collected the stage two win.

The field restarted for the final stage on lap 65, and the field quickly went single file with Gragson out front. With 70 of the 100 scheduled laps completed, 36 of the 38 cars were on the lead lap and the field was content to ride in line.

Oh, how quickly do things change.

The chaos began on lap 72, as Riley Herbst had a flat tire and went spinning through the infield grass. No other cars were involved, but the caution was out once again, and the field was bunched back up for a restart on lap 77.

The field began racing two-wide and three-wide once again, but the drivers were able to keep it clean — for five laps.

John Hunter Nemechek spun in front of the field after a bad bump from Brown, and he collected Creed in the process. Creed then spun back into the racing line, and the right side of his car was drilled by Joe Graf Jr.

It was a disappointing end to the night for Creed, who was trying to make up as many points as possible on Ryan Sieg in a battle to make the playoffs. But the most important thing is that Creed was uninjured after the crash. The impact with Graf’s car was so severe that the right side of No. 2 car was pancaked in, the roof was damaged, and the rear end housing was bent out of place.

From there, chaos unfolded. Gragson continued to clock laps out front, and he had the aid of teammates Allgaier, Josh Berry and Sam Mayer in the top five to help. That all changed on lap 92, however, as Allmendinger and Allgaier spun while battling for second place. Mayer, Berry, Myatt Snider were among the drivers collected.

Gragson retained the lead for a restart with three laps to go, but he no longer had any help after all three of his teammates were taken out in the crash. The rest of the field responded by ganging up on him for the restart, and Gragson was now at the mercy of the pack after leading 52 of the first 96 laps. Daniel Hemric worked his way past Gragson to lead lap 97, while Austin Hill fought with a damaged car to lead lap 98.

With the field rounding turn 4 to take the white flag and complete the 99th lap, Hemric crashed from second place after he pulled a late block on Gragson. Allgaier, Jeb Burton, Herbst and Brandon Jones were among the drivers involved, and the accident took Alfredo and David Starr out of the race.

An incident coming to the tri-oval sends us to #NASCAROvertime at @DAYTONA. pic.twitter.com/K08GI3hHnN

With that, the field headed into the first overtime period. The drivers were unable to compete a lap, however, as a 13-car melee was sparked on lap 104 after Herbst got into the back of Brown. The accident ended the night for six drivers, with the most notable casualties being Justin Haley, Ryan Sieg and Ricky Stenhouse Jr.

A crash on the backstretch brings out the yellow during #NASCAROvertime at @DAYTONA. pic.twitter.com/3oqUm50wDe

Through every caution, Austin Hill continued to lead. But the field was unable to complete in the second overtime session either, as Allmendinger got into the back of Gragson while battling for second on lap 111. The dominant car of the day then suffered a hard hit into the outside wall, and Gragson, Landon Cassill and Matt Mills were down for the count.

Here's a look at what happened during the second attempt of #NASCAROvertime. @NoahGragson and @landoncassill were among those involved. pic.twitter.com/d47B8hngpj

At this point, Austin Hill and Allmendinger were the top two cars. But with the race going more than 14 laps passed the scheduled distance, fuel became a concern for many of the frontrunners. Allmendinger ran out under caution, and he was forced to surrender second. Hill began developing electrical issues on the same lap, but he stayed on track for the final restart as the leader.

The third time was the charm, as the race finally ended in the third overtime. But the drama did not end there, as Austin Hill’s car sputtered and fell out of contention once the field took the green flag. Clements inherited the lead, and with the field heavily damaged and spread out after Hill’s failed launch, it was Clements, Karam and Timmy Hill duking it out for the win. They were quickly joined by Brown and Allmendinger, as Allmendinger pushed the duo into contention on the backstretch with two laps remaining.

Karam fell out of the lead pack and Allmendinger abandoned Brown heading into turn 3, which set up a battle between Clements, Timmy Hill and Allmendinger as the field took the white flag. Allmendinger tried to pass Clements, but his run went nowhere as he then found himself battling Hill for second.

But as field approached turn 1 on the final lap, Herbst spun once again through the trioval to bring out the caution, which brought a merciful end to one of the most destructive finishes in recent memory. And with the end came the second win of Clements’ career, his second trip to the Xfinity Series playoffs and the end of his 164-race winless drought.

What an ending at @DAYTONA! pic.twitter.com/K4kUqzkS0q

The Xfinity Series will return to Darlington Raceway for the Sport Clips Haircuts VFW Help A Hero 200, which will take place on Saturday, Sept. 3 at 3 p.m. ET. USA will provide coverage of the race.

What a horrid race. So many mistakes that caused “the big one” several times over. Not fun to watch at all. Rather made you mad, a waste. IMO.

Another very expensive superspeedway race for the teams. Pretty telling that Dale Jr. made the comment last night that he watches the haulers leave his race shop for Daytona or Talladega knowing it’s likely the cars won’t return in one piece.

From the time they got the flag with FOUR laps to go until the checkered flag took FORTY-THREE minutes. The brain trust is praying for the same ending for the 400!

EIGHTEEN EXTRA LAPS!!!!! Should have been two red flags!