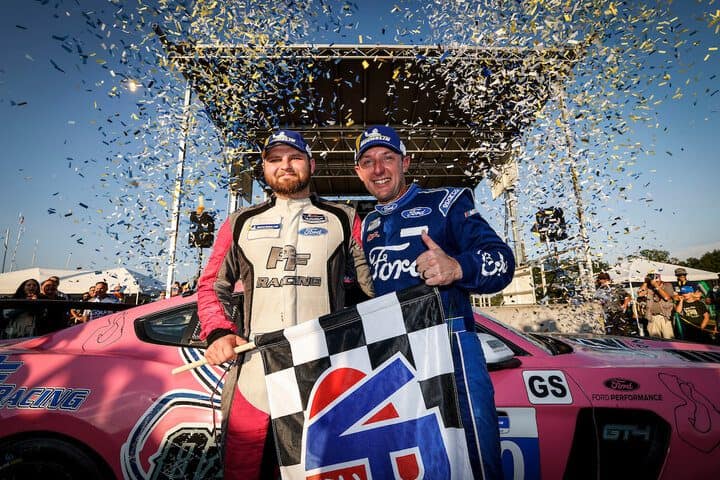 PF Racing’s Joey Hand was able to overtake Riley Motorsports’ Scott Andrews with less than half a lap to go when Andrews ran out of fuel.  Hand then held off Billy Johnson to take victory in the IMSA Michelin Pilot Challenge Virginia Is For Racing Lovers Grand Prix for himself and teammate James Pesek Saturday (Aug. 27).

“We had a fantastic run; James [Pesek] did a great job keeping this car in the hunt,” Hand told NBC Sports’ Kevin Lee after the race.  “Super proud to be part of the Ford family.  We struggled with brake issues throughout the race and ended up conserving fuel because of it.”

Murillo Racing’s Kenny Murillo started from pole in his Mercedes and led early.  The man (or teenager) on the move early was KohR Motorsport’s Luca Mars.  Mars started fifth and quickly moved himself past Matt Travis and Michael McCann Jr. into third on the first lap.  A couple of laps later, he passed Turner Motorsport’s Dillon Machavern for second and put the pressure on Murillo for the lead.  He was never able to get past, but he did haunt Murillo substantially.

The championship was such that Alan Brynjolfsson and Trent Hindman entered the race with a 220-point lead over Murillo Racing’s Eric Foss.  A decent run, combined with issues for the No. 56 Mercedes could clinch the title for them.

Early on, VOLT Racing looked good.  Brynjolfsson drove the No. 7 Aston Martin up to fourth overall.  Meanwhile, Jeff Mosing had crashed his Mercedes during qualifying and lost his qualifying laps, forcing him to start from the rear of the class.  In the opening laps of the race, Mosing got into the BMW of Turner Motorsport’s Vin Barletta in turn 1, resulting in a spin.  Mosing was judged responsible for the incident and given a drive-through penalty.

The contact further damaged Mosing’s car, which was already second-hand from Friday’s crash.  After some debris blew off the car, Mosing had to make a second unscheduled trip to the pits for repairs.  By the time it was all said and done, Mosing was nearly a lap down and running at the back of the field.

Brynjolfsson was looking good until his Aston Martin died 45 minutes into the race.  Brynjolfsson thought that he had ran out of fuel while passing the pit entry, but it was an electrical issue that ruined his day.  The 90-degree weather may have also played a role here.  It was impossible for Brynjolfsson to coast for the full 3.27 miles.  As a result, he ultimately ground to a halt in turn 2 to draw the race’s first caution.  The VOLT Racing Aston Martin would be towed back and fixed, but they lost four laps and were out of contention.

During the pit stops under yellow, Billy Johnson was able to get the KohR Motorsports Ford out ahead of Christian Szymczak.  However, Turner Motorsport’s No. 95 had made their first pit stop to put Bill Auberlen in the car prior to the caution.  As a result, Auberlen cycled to the overall lead.

The green came back out with 55 minutes to go and Auberlen came under instant pressure from NOLAsport’s Jason Hart.  55 minutes is a little too long for the Grand Sport cars.  Hart was forced to make another pit stop to get the fuel necessary to reach the finish.  That resulted in Stephen Cameron Racing’s Greg Liefooghe moving up to second.

Auberlen was able to maintain a small lead over a brawl for second behind Liefooghe, Johnson and Szymczak.  That battle ultimately resulted in contact between Liefooghe and Johnson that spun out Liefooghe.  Johnson was judged responsible for the incident and had to serve a drive-through penalty.

Auberlen ended up in a battle for the lead with Szymczak, 13 seconds ahead of the rest of the field, but desperately in need of a caution to conserve fuel.  That yellow didn’t come quick enough as Auberlen was forced to pit with 13 minutes to go.  Szymczak followed a lap later, yielding the lead to Andrews.

With less than 10 minutes to go, Hardpoint’s Sean McAlister stopped on the backstretch briefly with fuel issues.  This was enough to draw a full course caution despite the fact that McAlister was able to restart his Porsche and get back to the pits.

The caution ultimately set up a two-lap sprint to the finish with fuel a serious issue for nearly everyone.  Spencer Pumpelly, who was running second at the yellow, ran out of fuel with one to go before the restart and was forced to pull off.

Behind Andrews, Hand was able to clear Johnson in a scrum of traffic at the Oak Tree Turn as Andrews tried to run away.  At the start of the final lap, Andrews had a three-second lead.  Then, the tank went dry and Hand was able to get around for the win.

Hand and Pesek’s initial margin of victory was .125 seconds over Johnson and Mars.  However, the No. 59 Mustang was found to have exceeded the maximum fuel capacity allowed for the car under IMSA regulations.  As a result, they were moved to the back of the class.

The penalty means that the race is now a one-two finish for PF Racing as Kyle Marcelli and Sheena Monk were credited with second, 3.268 seconds back.  TeamTGM’s Ted Giovanis and Owen Trinkler were third in their Porsche, then Turner Motorsport’s Barletta and Robby Foley.  Auberlen and Machavern rounded out the top five.

David Brule and Alec Udell in the Kelly-Moss Road & Race Porsche ended up sixth, followed Hart and Travis in the NOLAsport Porsche.  Liefooghe and Sean Quinlan recovered to eighth after their late spin, followed by Rebel Rock Racing’s Frank DePew and Robin Liddell, who ran nearly the entire second half of the race without their rear bumper.  Andrews and Anton Dias Perera ended up having to settle for 10th.

In TCR, Tyler Gonzalez started from pole in his Hyundai Veloster N TCR and held off Harry Gottsacker early on.  Meanwhile, Mark Wilkins was forced to pit in the opening laps due to a water leak.  Sadly, this mechanical issue was terminal, ending the No. 33 Hyundai’s day and any chance Robert Wickens had at the TCR class.

Tyler Gonzalez led until he ran up on the slower Grand Sport entry of Brule.  Brule held Tyler Gonzalez up just enough for Gottsacker to slip past at the Oak Tree turn.

Gottsacker led until the first caution came out.  During the yellow, all of the TCR teams pitted for tires, fuel and a driver change.  Tyler Gonzalez got out of the car in favor of Rory van der Steur and managed to beat Parker Chase out of the pits.

Once the race restarted, the race was on for the win.  There was contact made between van der Steur and Chase that loosened bodywork on van der Steur’s Veloster.  That bodywork flipped up and negatively affected van der Steur’s aerodynamics.  This lack of downforce allowed Chase to take the lead in the Oak Tree turn.

VGRT’s Karl Wittmer was able to get past van der Steur and take the battle to Chase for the lead.  Meanwhile, the flapping bodywork got progressively worse on van der Steur’s Veloster.  That, plus a brief off-course excursion dropped him to sixth.

The last year closed everyone back up for one last chance to steal victory from the point leaders.  However, Michael Lewis could not be caught as he pulled away on the final restart to give himself and teammate Taylor Hagler their first win of the year.

Mosing and Foss ended up on the lead lap in 19th overall, 12th in Grand Sport.  Hindman and Brynjolfsson ended up 28th overall, 18th in class.  That means that the margin is down to 160 points.  In TCR, Lewis and Hagler’s first win of the year couldn’t have come at a better time.  The victory increased their lead from 30 points to 100.

The championships will be decided in the FOX Factory 120 at Michelin Raceway Road Atlanta on Sept. 30.  The action will be streamed live on Peacock at 1:05 p.m. ET.  Frontstretch will be on-site in Georgia to bring you all of the action.