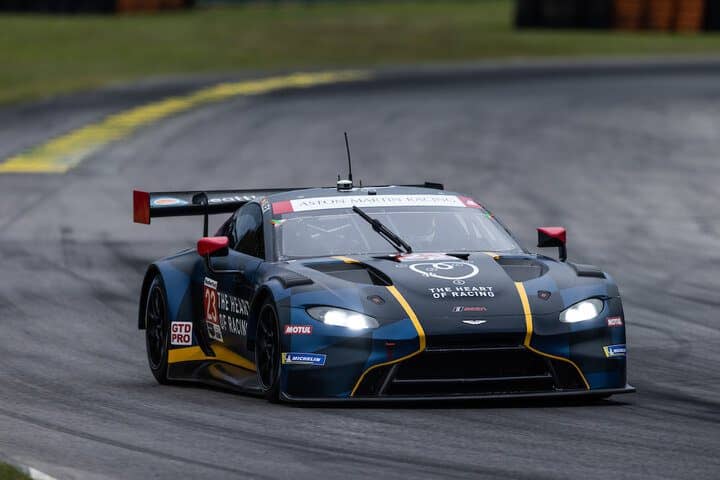 The Heart of Racing’s Ross Gunn won the pole Saturday (Aug. 27) for the IMSA WeatherTech SportsCar Championship’s Michelin GT Challenge at VIR with a lap at 113.243 mph.  It is Gunn’s first career IMSA pole.

“It means an awful lot [to win my first pole],” Gunn told NBC Sports’ Matt Yocum afterwards.  “We knew that [VIR] suited the strengths of the Aston Martin, and the [qualifying] session proved so.  I was really happy with the balance of the car.  We worked hard in free practice to improve the car and we have the best starting spot.”

Since VIR is a GT-only round, qualifying was only one short round of 15 minutes with all 18 cars on track at the same time.  GTD Pro saw the teams slowly work their way up to speed.  It was after the halfway point of the session before truly representative times were posted.

The first truly representative time was set by VasserSullivan’s Jack Hawksworth, who was fastest overall in practice earlier in the day.  That time was quickly usurped by Gunn with a lap at 112.849 mph.

It briefly seemed like that was going to hold up for the overall pole because Corvette Racing’s Antonio Garcia spun in turn 3 and hit the tire barrier.  As this was after the 10-minute mark of the session was reached, the session could have been declared complete.  However, Garcia was able to get back underway, allowing the green to stay out.

Garcia wasn’t the only driver to get off the course.  Around the same time that Garcia spun off, Pfaff Motorsports’ Matt Campbell put a wheel off exiting turn 10.  This led to Campbell going off in turn 11 due to a lack of grip.  Hardpoint’s Rob Ferriol spun exiting the Oak Tree turn, while Hawksworth had his own trouble.

After Garcia’s trouble, Gunn was able to improve to a lap at 113.243 mph.  This lap held up to give Gunn and The Heart of Racing the overall pole.

Gunn’s lap was more than seven-tenths of a second faster than Garcia, who recovered from his contact with the tire curtain to improve his time.  Campbell will start third, followed by BMW M Team RLL’s Connor de Phillippi.  Hawksworth was never able to improve from his first representative time and will start fifth with a lap that was a full second slower than he was in practice.

Later on, CarBahn Motorsports with Peregrine Racing’s Robert Megennis put himself at the front.  In the closing minutes, Winward Racing’s Russell Ward set a lap at 112.104 mph to win the GTD pole, his third of the year.  Despite this, Ward tried to improve on his final lap.  He ended up getting off the road exiting the final turn and clogging his grille full of grass.

The Michelin GT Challenge at VIR is scheduled to go green at 2:10 p.m. ET Sunday afternoon.  The race will air live on CNBC starting at 2 p.m.