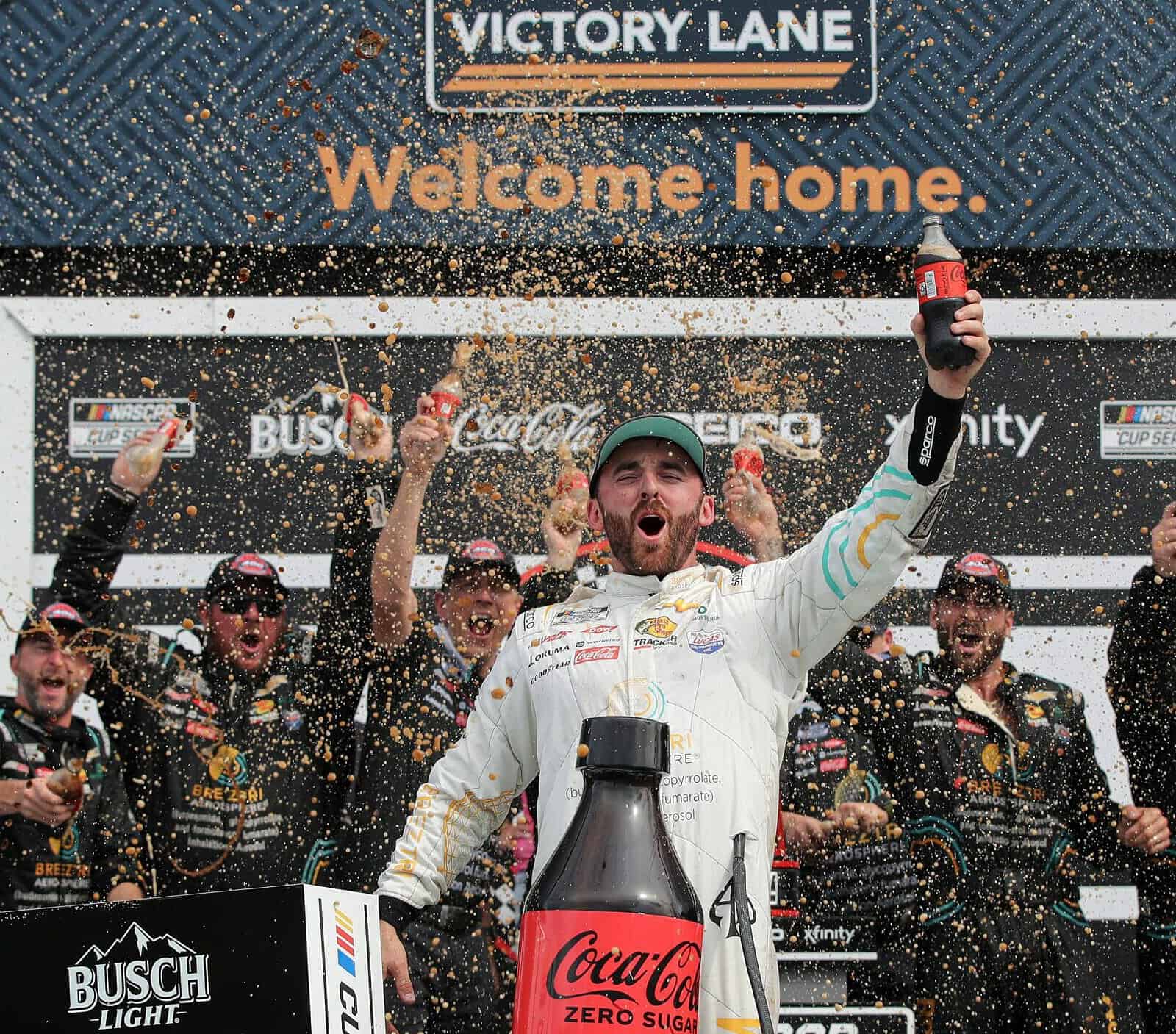 DAYTONA BEACH, Fla. – At 12:52 p.m. ET Sunday (Aug. 28), a rumble of thunder, arguably the loudest of the weekend, rolled over Daytona International Speedway.

It came just as Martin Truex Jr., a NASCAR Cup driver clinging to a playoff spot, rolled into the media center.

“That sounds beautiful,” Truex deadpanned to no one in particular.

At the moment, Truex was one of two drivers in a large, mostly empty room at the back of the building. Once the location of pre-race driver meetings, it was now used to interview drivers during unwelcome rain delays.

This downpour had left the Cup Series’ regular-season finale paused with 21 laps to go. The rain storm in question was also the culprit of a 13-car pile-up in turn 1. At the time of the red flag, Truex had only a three-point advantage over Ryan Blaney for the final spot.

The only other driver in the room was one of the very few who had not gotten caught up in the melee. Laps after receiving the lucky dog to get back on the lead lap, he had somehow avoided the carnage, driving between the wrecking car of Harrison Burton and Truex, who had spun into the grass at the bottom of turn 2.

When he came out on the other end, he’d taken his No. 3 Chevrolet from roughly 16th to first in two turns.

Before giving an interview with NBC, Truex looked over at the other driver.

“You just get the lucky dog?” Truex asked.

Truex asked if he had been doing a “rain dance.”

“I’m hoping,” Dillon answered with a chuckle. “Lightning, whatever.”

As interviews went on, Dillon sat on a stage at the far end of the room, flanked by his PR representative, quietly waiting.

The Richard Childress Racing driver had entered the race 19th in the point standings. His only way to advance to the 16-driver playoff was to win at Daytona for the second time in his Cup career.

But right now, all he could do was wait.

“You go in that room where they make you sit and put the camera on you forever, and it’s like you’re thinking in the back of your head that somebody’s gonna walk around the corner and say, ‘Hey, congratulations, you won,'” Dillon said later. “But you don’t let your mind drift to that. It’s like, you still got laps to go. And I knew after that second storm, I had to get my mind right that if they didn’t call it then we were going back green.”

Dillon also found himself with another, more urgent problem.

He was very cold.

“I didn’t have a dry shirt for a little while, so that was getting to me,” Dillon said. “Then just kicking the back of my feet on the little wall there the whole time just trying to act cool, and inside you’re just chilling, waiting.”

Right before going live the Joe Gibbs Racing driver, in an uncharacteristically playful mood, called out to Dillon.

“How many times have you said ‘amen’?” Busch asked.

At 3:41 p.m. ET, Daytona’s loudspeakers around the track came alive with an announcement.

Drivers would return to their cars in 10 minutes.

The relatively few fans who remained in the frontstretch grandstands, almost 3 hours and 20 minutes after the rain came, loudly cheered.

When USA Network began showing a replay of the first portion of the race, Dillon had returned to his motorcoach.

After time spent watching “Paw Patrol” with his son Ace and his PBR team the Carolina Cowboys competing in Austin, Texas, Dillon returned to his No. 3 car, complete with a fresh white fire suit.

It wasn’t even a suit meant for race use, but one intended for photo shoots.

“I had to cut a hole in it for my water deal that we plug up to to keep ourselves cool,” Dillon said. “I didn’t even realize it when I walked out there that it was, like, not ready. I had to take a box cutter and cut the side of it to let the hole out.”

With that taken care of, Dillon climbed back in his car located at the front end of pit road. Behind him were about 20 cars in various states of disrepair. Dillon’s own Chevrolet was damaged from being involved in a wreck on lap 125.

Only 10 cars were on the lead lap, and only 16 would be scored as running by the checkered flag.

What transpired over the next 16 laps was described by both Austin Cindric and Tyler Reddick as “like an ARCA race.”

With 13 laps to go, there was a four-car breakaway at the front comprised of Cindric, Dillon, Landon Cassill and Truex.

At 10 laps to go, the two-car pairing of Noah Gragson and Dillon’s teammate, Reddick, had caught up to them, picking off Truex in the process. A lap later, Cassill fell to the duo. That left only Gragson between the Richard Childress Racing cars in their attempt to overpower Cindric.

“If I made a move, I just needed to make sure it wasn’t going to hurt Austin,” Reddick told Frontstretch. “Thankfully, things happened before it came to that point.”

It occurred with three laps left thanks to a maneuver you’re not used to seeing on a superspeedway: the bump-and-run.

As the leaders roared into turn 1, Dillon gave a pop to Cindric’s rear bumper. It caused his No. 2 Ford to swerve — allowing Dillon, Gragson and Reddick by — before sliding up the track where Cindric corralled it.

In the burst of chaos, Reddick slipped by Gragson to take second.

“I was wondering if they’re ever going to do anything with (their run),” Cindric said. “I felt like there were three or four times where they could have had me … Felt like he could have just drove by me instead of driving through me.”

Even then, Cindric called the bump-and-run, despite being at a superspeedway, “fair game.”

He was just happy to survive it.

“I didn’t think I’d get a bump-and-run and not wreck,” Cindric told Frontstretch.

Dillon said his plan was to keep “pushing him out” away from the other cars.

“My intention was to get the lead before the white, so it worked out the way I wanted it to,” Dillon said. “But I’m not going to just say that that was the time I really wanted it to happen. I was actually just trying to get him a little further out, and he got free right there into (turn) 1.”

With Reddick now nestled behind him, the two RCR drivers ran for the finish. Cindric could only get back to third before Dillon took the checkered flag, securing his spot in the playoffs.

“Thank you, Jesus, baby!” Dillon screamed over his team’s radio.

Dillon said he was “definitely” proud to have been in a position Sunday to win thanks to rain or the checkered flag.

“I say that a lot in our basketball league when I get fouled, and everybody in the league complains that I get fouled because I run the league,” Dillon said. “It’s like when I knock down the free throws, ball don’t lie…

“That was a happy moment to be up front either way.”

In a remarkable twist, Dillon’s win had an echo of a Cup race run at Daytona 32 years ago.

Thanks to storms on Saturday, Sunday’s race was the first time since July 7, 1990 that the summer Cup race had started at 10 a.m. ET.

On that day, it was Dale Earnhardt and the No. 3 Chevrolet that went to victory lane.

Dillon’s win puts two RCR cars in the playoffs via wins for the first time since 2017. Of his four victories since 2017 and Reddick’s two this season, was this Daytona win the most significant for RCR in the big picture?

“This is a big win,” Dillon said. “It’s, obviously, awesome. I’m going to enjoy it and celebrate it and enjoy the fact that we’re going to get to go compete with the top 16 drivers.”

“But it’s the next moment, right?” he added. “You have to look forward to that next one to really see where the company is at because this sport, you just level yourself off of everyone constantly. You’re constantly being judged against the guy next to you.

“So right now, it feels really good. We came out on top, but we got 10 more weeks of this.”

Back in July, in the aftermath of Reddick’s first career Cup win at Road America, Frontstretch had asked Petree if, after years in the wilderness following the departure of Kevin Harvick, RCR was “back.”

The former Dale Earnhardt crew chief had demurred, saying to wait until they had multiple wins.

Entering the playoffs, RCR now has three of them for the first time since Harvick’s final year (2013).

So, what about now?

Petree stopped in the alley behind pit road and smiled big.

“RCR” is back. In what universe? Crapshoot win. He won’t last long in the playoffs, which will be a pleasure to watch. Arrogant jerk. All this is good for is soundbites for his insanely stupid and childish “reality series”. Barf……

Reddick will pass him if it happens in the next 3 races. Dillon had a great pusher but still he used his bumper AGAIN at Daytona.

You can spin it any way you want but in the end Dillon hit the lottery. If it had just rained he wouldn’t have been in position to win. He needed the rain to take out half the field, and that’s what happened.

Yep, and he bumped Cindric out of the way to win Daytona, just like he slammed Almirola from behind to win the 500. I am very sceptical Dillons prayers were answered.

In the replay it looked like Bubba was clear and a few car lengths behind him was the 3 car. The 23 suddenly hooked a left and this wasn’t mentioned post race, he hit the mud. Nothing was said.