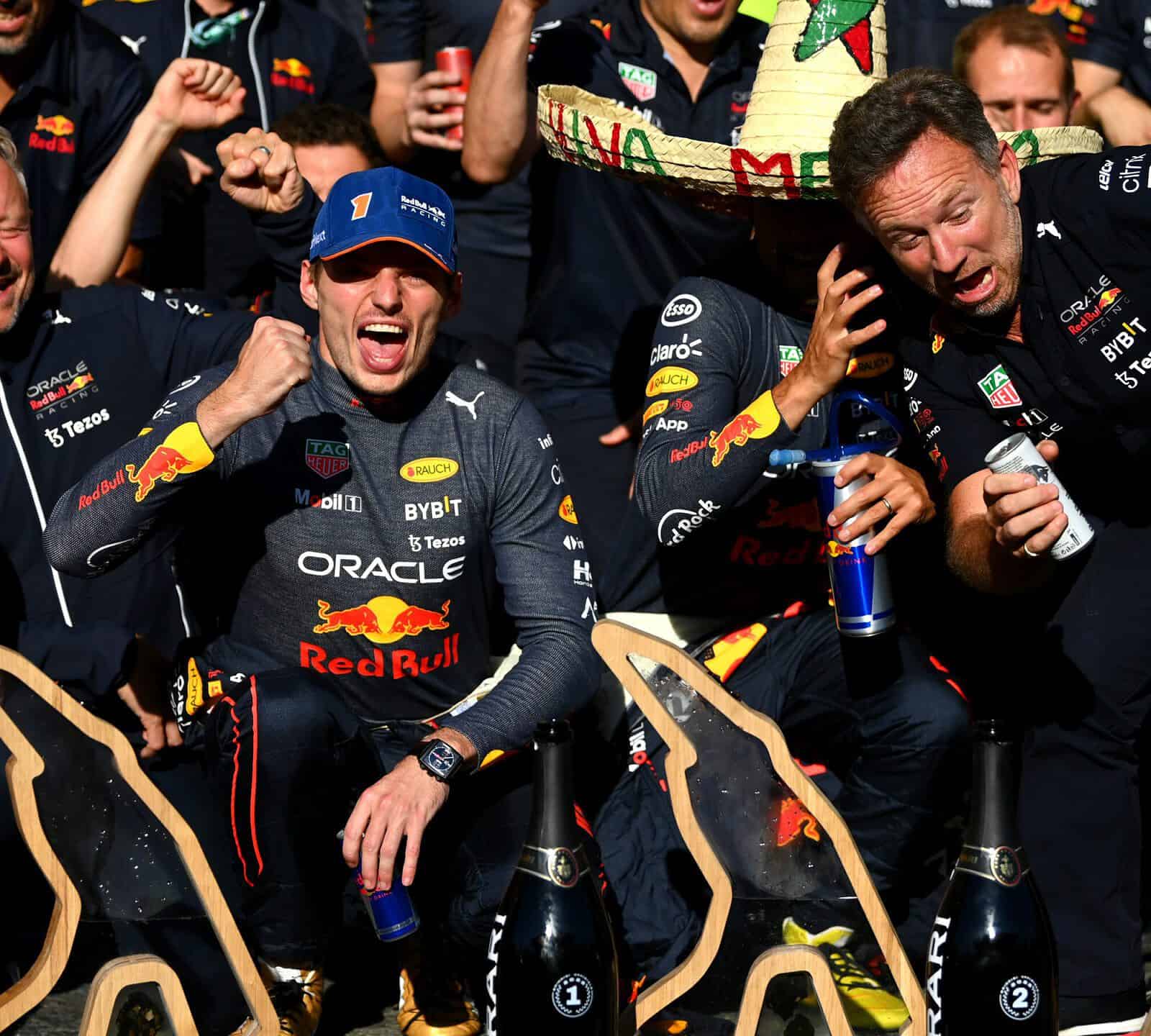 Charles Leclerc may have stated he is still in the championship fight as Formula 1 emerged from its summer slumber and took to the track in Belgium. But Max Verstappen seemed to aver that the title is already his. Starting 14th, because of changes to his power unit, Verstappen made his drive look easy and essentially cruised to the front, claiming victory at the Belgian Grand Prix. The win marks his ninth of the 2022 season, third consecutive, and 29th of his career.

Verstappen now leads the championship by 93 points (284–191) over … teammate Sergio Perez. Perez finished second in Belgium and moved into second place in the standings. The result cements Red Bull’s place at the front of the field and makes any challenge from Ferrari come as improbable.

Carlos Sainz drove what could be said as his level best and finished third. Since Azerbaijan, where both Ferrari drivers endured DNFs, Sainz has marginally outperformed Leclerc (88 points to 70). George Russell enjoyed a solid start and then held on to finish fourth (which is also where he sits in the driver’s standings).

Fernando Alonso should have earned the spotlight driver of the GP by battling with Lewis Hamilton on the first lap and then holding off Leclerc on the final lap. Leclerc became the victim of a strange call from the Ferrari pits that dropped him a spot on the white flag circuit, placing him behind Alonso in sixth.

Esteban Ocon finished seventh, which – with Alonso’s fifth – earned Alpine an excellent points haul that pushed them ahead of McLaren by 20 points in the standings.

Sebastian Vettel, looking more like the fifth member of the jam-band Phish than a steely F1 driver, took eighth. Pierre Gasly, who started the race from pit lane, managed to work his way through the field to make it to ninth, with Alex Albon scoring the final point of the race on the heels of extending with Williams.

The Belgian GP is the start of three straight race weekends of racing for F1, with the Dutch and Italian stops filling the next two. Should Red Bull continue its torrid pace, the championships will feel like they are over by the middle of September, and at the moment, there is little reason to think otherwise.

Starting 14th, Verstappen had navigated his way to eighth by the end of the first lap. While the race began with a clean start, Hamilton’s attempted pass on Alonso during the first lap ended poorly for the seven-time champion Hamilton and put him out of the race.

Following the safety car slowdown for Hamilton’s parked car, and Valtteri Bottas’ beached Alfa Romeo coming after he spun to avoid Nicholas Latifi, Verstappen then continued ripping moving forward, making his way to sixth by lap 6 and up to third by lap 10.

Owing to tire and pit strategies that brought Sainz and Perez in, Verstappen took over the lead of the race by lap 13.  One-third of the race completed and the first pit stops put into history, Sainz led Verstappen with Perez and Russell off in the distance.

On lap 18, Verstappen confirmed what everyone with eyes had seen over the course of the race weekend — that he had the fastest car and was the driver to beat, providing the necessary evidence with an easy overtake of Sainz and moving into the lead. His lead after one lap swelled to over two seconds, surely demoralizing the field.

The Sky Sports announcers, doing their best to keep viewers invested, even offered that Verstappen may “have this race sewn up, but there is a lot of racing left.” While it was a good effort, there was no reason to think that Red Bull and Verstappen would cock things up like Ferrari might. In fact, by lap 28, David Croft and Martin Brundle were offering tidbits like the Belgian GP being the first F1 race to feature two Canadians starting in the top 11. Put that in the memory bank for absurd F1 trivia.

With the drama for the win over, the on-track fights back in the field became the story, and yet there was little there. Perhaps the long, undulating layout in Belgium did not foster the overtaking the 2022 car is supposed to offer, or maybe the cars were too equally matched. But the racing in the back never quite delivered.

– Vettel must have added something special to his breakfast, because the four-time champion came out firing. He put together the best race of his season and looked aggressive and comfortable in doing so.  With retirement nearing, seeing Vettel finish off the season in strong fashion could be one of the enjoyable storylines to follow over the final eight races.

– On lap 1, with both Alonso and Hamilton making great starts, the two tangled about halfway through the circuit. Hamilton had gotten alongside Alonso and looked to be on his way past but overestimated his position.

“It was my fault. I couldn’t see him, actually. He was right in my blind spot,” Hamilton later said after walking a service road back to the pits.

Hamilton certainly has his aggressive moments, and he may have been too rambunctious at the start, attempting to make up for the limitations of his Mercedes. Regardless of how much he’s at fault, this result hurts. Botching a day with easy points for the taking is troubling for a team so far off its championship pace.

– The 2022 season has featured Ferrari finding fun and exciting ways to look foolish at nearly every Grand Prix. Coming out of the summer break, where some teams would find ways to clean up their operations, Ferrari clearly focused on honing their skewed view of auto racing and sticking with what has gotten them this far.

While acknowledging that Red Bull could find no worthy competitors on this day, Ferrari still managed a way to mess up their attempt to claim maximum points and possibly finish third and fifth.

The team brought Leclerc in to grab fresh soft tires for the final lap, hoping he would earn the fastest lap point. Instead, coming out of the pits he found himself passed by Alonso, whom he fought to finally pass in the final corners in what looked to be maintaining his fifth spot. That result got thrown out when the data showed Leclerc sped on pit lane, relegating him to sixth. Ferrari is nothing if not magnificent in finding ways to give away points this year.

– There should be little in the way of shock in learning that Verstappen earned the Driver of the Day award. He made it look easy, and coming from 14th to win is an incredible statistic. Grabbing nine wins on the year also looks pretty decent.

– Ferrari botched the call, but Leclerc also failed to deliver, nabbing a speeding penalty in the pits that placed him sixth on the day. For his efforts, Leclerc offered, “I mean, the pit lane is not bad luck. It’s just my fault, so it’s a mistake and that’s it.”

– A Red Bull team principal placed the results for the team as historic, saying, “This was our biggest ever achievement to date. We have never won a race from as far back as P14 and to take a 1 – 2 with Checo (Perez), along with fastest lap, is an outstanding achievement. It’s a fantastic win for Max and he has been in a class of his own on the track this weekend but it really is a team victory.”

– Bottas may have scored a DNF but had things in perspective on his birthday, “I saw Latifi spin towards the left, and all I could do was take evasive action to avoid a collision,” he said. “Unfortunately, I spun on the grass and ended up stuck in the gravel; I tried to go forward and back, but couldn’t move. It’s not the birthday present I wanted, but hopefully, I can still have some fun tonight, before we turn our focus on next week.”

Note: Verstappen scored an additional point for setting the fastest lap of the race. Leclerc received a five-second time penalty for speeding in the pit lane.