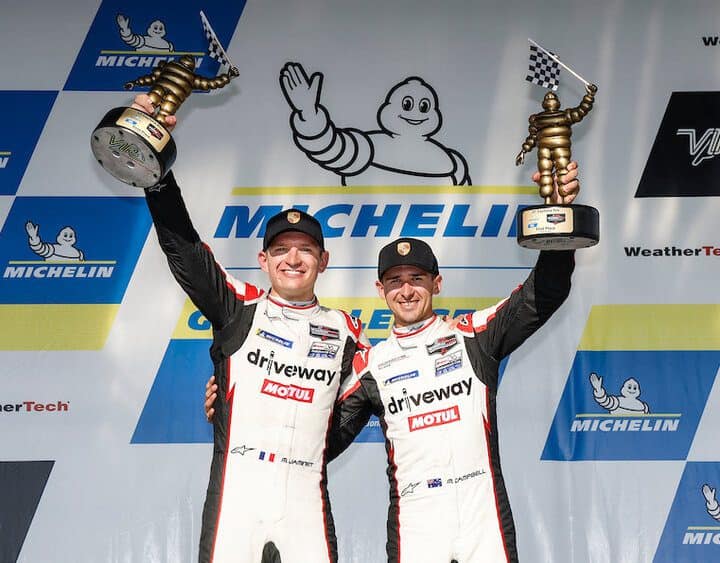 Pfaff Motorsports’ Matt Campbell and Mathieu Jaminet dominated the second half of the Michelin GT Challenge at VIR Sunday (Aug. 28).  They just barely put enough fuel in the car on their final stop to earn the IMSA WeatherTech SportsCar Championship victory, their fifth of the year and second straight at VIR.  Last year’s victory with Laurens Vanthoor and Zacharie Robichon came in the regular GTD class as opposed to GTD Pro.

To start the race, the Heart of Racing’s Ross Gunn started from pole in his Aston Martin and opened up a small gap on the pack.  Campbell was able to get around Antonio Garcia on the first lap and take second.

During the first round of stops, Corvette Racing decided to change their strategy up.  When they pitted for tires, fuel and to put Jordan Taylor in the car, the team chose to short-fill Taylor.  As a result, he moved into the overall lead.

Once there, Taylor put down a series of quick laps that resulted in an 11-second lead for the Corvette.  However, that advantage was short-lived as the yellow flew at halfway for debris.

The caution brought the class to pit road for their second of three stops.  Jaminet won the race off of pit road to get into the lead.

It ultimately took Jaminet until the fifth lap under green to get the overall lead back, but that came just in time for the final round of stops.  Jaminet stopped with 52 minutes to go, a distance that would be much more easily reached than some of the other teams.

That was not the case for much of the rest of the class.  The lead ultimately fell to The Heart of Racing’s Alex Riberas, who was on an alternate strategy after getting a penalty during the caution for pitting out of the box.  With nothing to lose, Riberas tried to go the distance on fuel.

Unfortunately, that didn’t work out.  Jaminet, running unimpeded by fuel issues, was able to run down and pass Riberas for the class lead with 16 minutes to go.  Riberas ended up stopping with just under five minutes to go to take five seconds of fuel.

Jaminet then ran down Riberas’ teammate Maxime Martin to take the overall lead in the closing minutes.  Once in the overall lead, Jaminet just barely made his fuel hold out for the win.  The fuel was completely a non-issue as Jaminet actually ran out on the cooldown lap.

Campbell and Jaminet’s margin of victory was .823 seconds over Garcia and Taylor.  Hawksworth and Ben Barnicoat were third, then Gunn and Riberas after their late splash.  De Phillippi and John Edwards were fifth.

As Campbell stated, the Pfaff duo will win the title just by starting the race at Road Atlanta in five weeks.  The victory gives them a 265-point lead over Garcia and Taylor.

In GTD, Winward Racing’s Russell Ward was quick right from the start of the race.  He pulled out a second on the rest of the class almost immediately.

Meanwhile, it was a short day for NTe Sport.  At the end of the backstretch, Jaden Conwright spun his Lamborghini and just clipped the tire barrier.  The hit was minor, so Conwright was able to right himself and get back underway.

However, that was not the end of Conwright’s problems.  Less than half a lap later, Conwright radioed to his crew that there was no power available.  Steam could be seen coming out of the top of the engine cover when Conwright pulled off the course into a safe area.  He was towed back to the paddock from the safe area, but the day was done that quick for the No. 42 team.

Ward was able to maintain the lead after his first stop 49 minutes into the race to put Philip Ellis into the car.  During the stop, the Winward team had a little bit of trouble with one of the wheels.  As a result, he dropped all the way to sixth.

Turner Motorsport chose to short pit Robby Foley to get off-sequence.  That allowed him to jump up to the class lead once the sequence completed.   The slow stop for Winward Racing allowed Rick Ware Racing’s Aidan Read to jump up to second.

Team Korthoff Motorsports’ Stevan McAleer came into Sunday’s race with a 36-point lead over Wright Motorsports’ Ryan Hardwick and Jan Heylen.  McAleer was running third after the first pit stop when he suddenly slowed on-track.  Luckily, it was only a loose wheel and McAleer was able to continue after an unscheduled pit stop.  It did cost McAleer a lap, though.

Ellis’ trouble continued when he was forced off the road in the Snake and clouted a WeatherTech roadside advertising placard.  The placard ended up partially on Ellis’ Mercedes and partially on the track, resulting in the debris yellow.

Magnus Racing’s Andy Lally and Hardpoint’s Katherine Legge chose to stay out here and assume the top two overall positions.  Once the green came out, Lally was able to open up a decent gap while the GTD Pro teams struggled to get past Legge.

By the time Jaminet was able to get by Lally for the overall lead, Lally had a four-second edge over Paul Miller Racing’s Bryan Sellers.  Lally gave up that lead with 55 minutes remaining to make his final pit stop.  Unfortunately, almost immediately after that stop, Lally cut his right rear tire and had to make another one.

When Lally pitted, Sellers ended up in the class lead over Aaron Telitz.  However, the race would come down to pit strategy.  No one could realistically go the final 68 minutes on fuel.

Ellis did try to make a proper go at it, though.  He was able to get into the final 10 minutes before stopping to take eight seconds of fuel.  That stop put The Heart of Racing’s Maxime Martin into the lead with very limited gas remaining.

The slow pace that Martin had to run to make it to the end meant Ellis was able to run him down quickly after his splash-and-go.  With a lap and a half to go, Ellis made the pass for the lead at the Oak Tree turn.  From there, Ellis pulled away to take the class win.

For Ellis and Ward, it is their second straight GTD win.  Combined with their Fanatec GT World Challenge America Powered by AWS exploits, it is their fourth straight win overall.

Ellis and Ward ended up 6.336 seconds ahead of Martin and Roman DeAngelis at the finish.  Martin did, in fact, make it to the end, but ran out of fuel on the cool down lap.  Sellers and Madison Snow were third, then Telitz and Frankie Montecalvo.  Hardwick and Heylen were fifth.

The second-place finish gives DeAngelis the points lead with a 45-point advantage over McAleer, who finished eighth with Mike Skeen.  Under the current point system, that is less than the difference between a victory and finishing third in class.  This championship battle is far from over.

There is only one race remaining on the IMSA WeatherTech SportsCar Championship calendar.  That is the 25th running of the Motul Petit Le Mans at Michelin Raceway Road Atlanta on Oct. 1.  Frontstretch will be on-site to bring you all the action from the 2.54-mile undulating road course.  On TV, the race will air live on a combination of NBC, USA and Peacock.