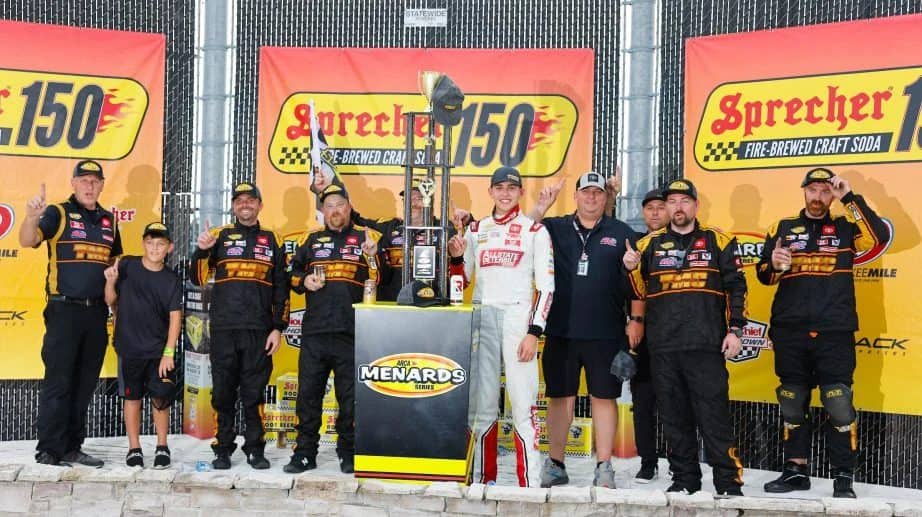 What is Mark McFarland’s secret to success at the Milwaukee Mile? For the second straight ARCA Menards Series event at the 1-mile track in West Allis, Wis., McFarland guided his driver to a thorough beatdown on the competition en route to victory. In 2021, Ty Gibbs victoriously led every lap there. This year, Sammy Smith victoriously led a race-high 122 laps and finally gave the No. 18 team repeat wins at a racetrack.

Now, with Milwaukee in the rear-view mirror, there are only five ARCA races left this season: at DuQuoin State Fairgrounds, Kansas Speedway, Bristol Motor Speedway, Salem Speedway and Toledo Speedway.

The top five in the championship standings stayed the same as the race for the title heats up. Nick Sanchez leads Daniel Dye, Rajah Caruth, Greg Van Alst and Toni Breidinger.

After the Sprecher 150, where did the contenders land in the power rankings?

In addition to tying for the ARCA series lead in victories with three, Smith also likely wrapped up his second straight ARCA Menards Series East championship. He unofficially leads Taylor Gray by 33 points with one race left in the East season at Bristol.

Consider this impressive stat from Smith’s win: of the 21 drivers who finished the race, only seven finished on the lead lap. So of the drivers who completed the Sprecher 150, only a third of them finished on the lead lap. Among those lapped drivers included series regulars Van Alst, Breidinger and Amber Balcaen, as well as East series full-time driver Leland Honeyman. Yes, Smith whooped the field on Sunday (Aug. 28).

The only mistake Smith made was he nearly drove his No. 18 into the outside wall as he began his celebratory burnout.

Although he finished 3.306 seconds behind Smith, Gray finished 2.089 seconds ahead of third-place Daniel Dye. Gray also led 28 laps, the only other driver besides Smith to lead in the Sprecher 150.

Curiously, Gray’s second-place finish was his first ever second-place result in his ARCA career. Indeed, it was close but no cigar for Gray.

Lead some laps, but just didn’t have enough. P2 from Milwaukee. pic.twitter.com/APae5wgI98

“We ended the day better than we started, so that’s all you could ask for,” Sanchez told Frontstretch post-race after his fifth-place finish at Milwaukee. “Honestly, I did not have too many expectations coming to Milwaukee, so to come out with fifth is good for what our short track program is. I guess that’s why you have a points cushion. Obviously, I want to win them, but we struggled a lot worse and finished fifth, which probably does not reflect how bad our day was. So, to walk away with that, I will take it.”

P5 at Milwaukee. Positive direction with our short track program but still plenty of work to do. pic.twitter.com/q4Xfv3XyHD

With only a quarter of the ARCA season left, Sanchez is firmly focused on winning the championship.

“I think Salem, Bristol and Kansas are going to be our three [tracks] to separate even more and hopefully get trophies at, so that’s what I’m looking forward to,” he said.

Dye finished third, the best of three ARCA championship contenders. However, all three finished in the top five. Dye clearly had the third-fastest racecar at Milwaukee, scoring his ninth straight top-10 finish.

Nice third place run this afternoon at the Milwaukee Mile for Daniel, in the @GMSRacingLLC No. 43 Champion Container, @VolusiaSheriff Chevrolet. [PR] pic.twitter.com/kZV7hE59Fl

To overtake Sanchez as the points leader, Dye will likely need a win and the two Rev drivers to struggle. Dye has shown he can run up front; now, the key to becoming the series points leader will be whether he can find some more speed to lead laps and contend for wins.

Of the three tracks Caruth has visited twice on the ARCA circuit, he improved the most at Milwaukee, finishing nine spots better this year than last year (13th last year to fourth this year). However, he gained only one point on Sanchez, less than ideal for his championship hopes.

Comparatively, the two teammates have both run well this season. Sanchez has bested Caruth, 12-8, topping him in wins, top fives, and average finishing position.

As a result, Caruth must lead laps and win at least one of the remaining races to decisively climb back atop the championship standings. Caruth has already competed at Bristol, Kansas and Salem, so his championship hopes are still intact.

The ARCA field will get dirty once more as the series heads to the second dirt track on its schedule. DuQuoin will host the ARCA field in the Rust-Oleum Automotive Finishes 100 on Sunday, Sept. 4 at 9 p.m. ET, with TV coverage provided by MAVTV Motorsports Network and available on FloRacing.