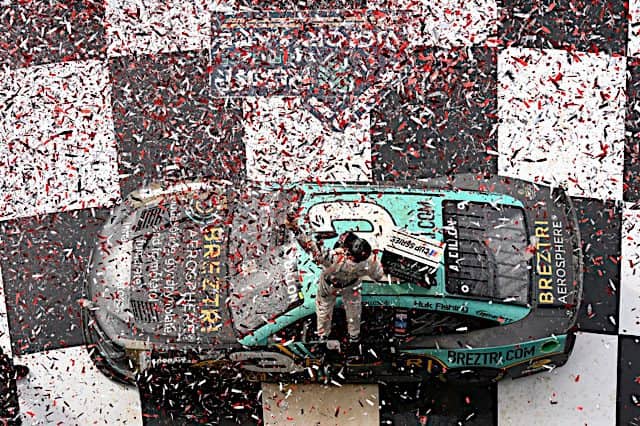 Did You Notice?… Austin Dillon led just eight laps during the first 25 races of the 2022 NASCAR Cup Series season?

That didn’t stop him from crashing this year’s playoff party, slipping through the wreckage at Daytona International Speedway to go from a lap down to the leader of the race in a matter of minutes. No one benefitted more from the rainstorm that came out of nowhere, wiping out half the field, than the No. 3 Richard Childress Racing team.

Even Dillon admitted it was a stroke of luck to be in the right place, right time to get through it all.

“I don’t know what you call that,” Dillon said. “We went from 15th to first. I know what it’s called. It’s called the good Lord was looking after us.”

Dillon then survived a late challenge from rookie Austin Cindric, pulling the bump-and-run on a superspeedway to earn his fourth career Cup victory. All of them have come under unusual circumstances, with Dillon leading a grand total of of 35 laps in those wins. That’s less than 10 laps out front, on average, every time he’s reached victory lane.

It makes Dillon one of the more polarizing drivers on the Cup circuit. Some think he’s underrated, unfairly criticized for a nine-year Cup career in a car once driven by Hall of Fame talent. Dale Earnhardt Sr. and Kevin Harvick combined for 90 victories and six championships with the No. 3/29 car from 1984-2013.

Dillon is a different personality, without that duo’s aggressive swagger and some of the eye-popping statistics they’ve accumulated. Critics say he’s only still in the car because of nepotism; Austin’s the grandson of Richard Childress and the son of team Executive Vice President Mike Dillon.

It’s a connection rarely lost on the driver himself. One of the more compelling moments of his post-race presser at Daytona is when Dillon opened up about teammate Tyler Reddick leaving the organization for 23XI Racing in 2024.

“For me, being an owner’s son sometimes comes with caveats, and I wanted to make sure that I had nothing to do with the reasons that he was leaving,” Dillon said. “When I called him, I was like, ‘Hey, man, I just want make sure I’ve been a good teammate to you.’ He said, ‘No, you have been an amazing teammate. Me and Alexa (de Leon, Reddick’s girlfriend) really enjoyed being around you guys.'”

Could you ever imagine the elder Earnhardt having that crisis of confidence? Should Dillon be more comfortable in his own skin based on his NASCAR achievements to date?

There’s a case to be made on both sides for how his Cup career has panned out.

THE CASE FOR AUSTIN DILLON

THE CASE AGAINST AUSTIN DILLON

2017 Coca-Cola 600: A fuel-mileage race where Dillon didn’t take the lead until the final two laps. He never finished higher than seventh in the race’s first three stages.

2018 Daytona 500: Dillon never led this race until the backstretch of the final lap, making contact with Almirola as the No. 10 car came up to block.

“I thought I was still gonna be OK,” Almirola said, who was comfortable with the contact. “Somehow, I got hooked.”

2020 O’Reilly Auto Parts 500: Dillon, who didn’t score a single stage point, got to the front through pit strategy, as RCR chose to keep him and teammate Reddick out on old tires during a lap 307 caution. The duo ended up with a 1-2 finish, surviving a series of final restarts where passing out front proved near-impossible with NASCAR’s clean air handling package at the time.

2022 Coke Zero Sugar 400: Dillon got involved in a wreck on lap 125, losing a lap after driving down pit road in reverse following the incident. The lucky dog/free pass got him back on the lead lap moments later, where he was sent to the rear and in perfect position to dodge the rain-induced carnage that followed.

Dillon never led the race before that gigantic wreck. From there, he had just nine other lead-lap cars to contend with, most of whom were serious underdogs or heavily damaged. His lone rival on speed, Cindric, got knocked out of the way through a bumpdraft after he snuck by Dillon for the lead on the final restart.

In summary: four of the most bizarre, arguably circumstantial wins in the history of any Cup driver’s career. You have to put yourself in position to win, as Jeff Burton likes to say, but there was a whole lot of Lady Luck on Dillon’s side for those.

Which side of the Austin Dillon debate do you land on?

I think a better question is whether or not there should be 16 drivers eligible for the playoffs. The fact that any driver with stats like Dillon’s, and there have been many since this playoff format started, makes the whole deal farcical. In reality, most years, there are only 5 drivers with championship worthy stats after 26 races.

Kevin in SoCal
Reply to  Bill B

I found a quote that applies to the characters in NA$CAR and elsewhere:

The only thing more dangerous than ignorance is arrogance.

I guess the best way to answer that is pretend his name is Smith. Would his stats have allowed him to stay with the upper teams for 9 years? Corey Lajoie has led more laps this year. But hey he got his win.

How did truex get screwed ! Dillon slammed Almirola out of the way for the 500 win, and this weekend bumped Cindric out of the way at Daytona again. This time the bump came going into the corner at 190 mph. Heck of a driver isn’t he..

“I know what it’s called. It’s called the good Lord was looking after us.”

I love these quotes. I guess the Lord was only watching you and not the other racers. And he ignored you during the other races you didn’t win. LOL

“Only four other active drivers have won both those races: Harvick, Denny Hamlin and the Busch brothers (both Kurt and Kyle).”

Kyle Busch has NOT won the Daytona 500.

You can make statistics show whatever agenda you want. One thing Dillon is very good at is using the chrome horn at Daytona to win the race.