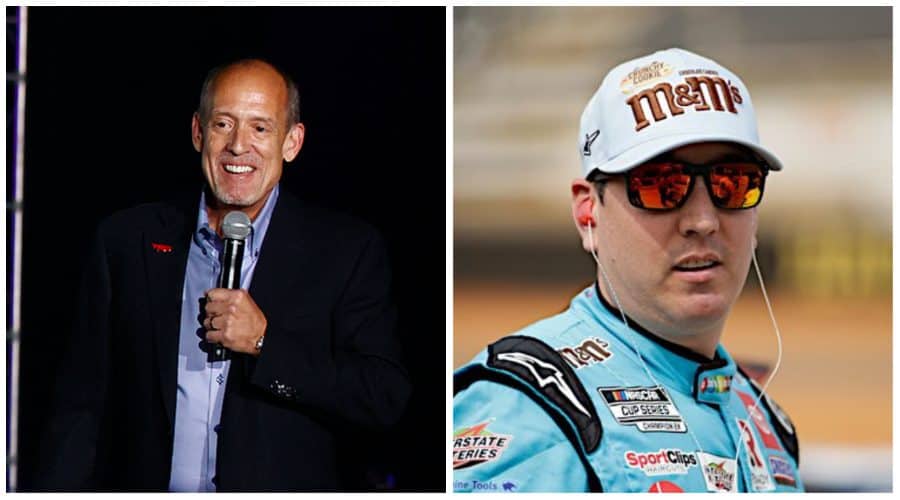 While the “percentage swings day-to-day” and the “highs and lows” of the situation have been “remarkable,” the president of Toyota Racing Development is keeping the faith.

During an impromptu media session Saturday evening (Aug. 27) in Daytona International Speedway’s media center, as storm clouds swirled over the track, Wilson declared that Toyota was “still in the mix” when it comes to the future of Kyle Busch in the NASCAR Cup Series.

This assessment came weeks after he told SiriusXM NASCAR Radio there was still a “chance” Toyota could keep the winner of 60 NASCAR Cup Series races.

“Our intent is still the same,” Wilson said Saturday as the possibility of running the Cup Series’ regular season finale as scheduled dwindled due to rain. “Kyle Busch is our 60-home-run hitter, and we’d be foolish not to put everything in play to keep him in the family. And that’s what we continue to do.”

Well, everything may be a strong word.

Wilson was pressed on why Toyota, which has been in the NASCAR Cup Series since 2007, hasn’t stepped forward to help make up the financial disparity that would keep Busch with Joe Gibbs Racing.

Wilson said to do so would go against Toyota’s “role” in the sport.

“From the time that we came in here (and) we started racing here at the beach in 2007 in the Cup Series, we have respected this sport, and we respected the position and the responsibility that we have in the sport, and it is not a responsibility wherein we are puppeteers and own drivers or racing teams,” Wilson said. “Joe Gibbs Racing has a contract with the driver.

“We do have relationships with every one of our drivers. It’s called a personal services agreement. That is because they are all ambassadors for us. But it is not our role as a manufacturer to backstop. That’s just not what we do. It’s not what we do.”

Due to this philosophy, JGR and Toyota may lose Busch to another team and manufacturer. Because they’d prefer doing things the way they always have.

Why is this so hard?

Why can’t the only active NASCAR Cup driver with multiple titles and 60 career Cup wins land a new sponsor to keep him with the team he’s raced for since 2008?

Wilson acknowledged that Busch’s volatile personality for the last 18 years “absolutely” has played a part in the difficulties.

He then laid out another harsh truth.

“It’s not good enough in this sport at the highest level to be the best driver,” Wilson said. “Kyle Busch is in the conversation for the greatest of all time. He’s in the process of breaking every record this sport has ever seen.

“That’s not good enough in this sport.

“You need Corporate America, you need sponsorship to drive the ship, and whether that’s a good thing or not a good thing, that’s not for me to say. That’s the fact. So it has been a challenging environment. Some of that is just organic to the current economy and inflation, recession, whatever you want to call it. Some of that is absolutely, again, the polarizing nature of some drivers, and they don’t fit every sponsor.”

Adding salt to the reality of Wilson’s words: the day before it was announced that Aric Almirola, arguably one of the more vanilla personalities among Cup drivers and the winner of just three Cup races in 414 starts, was reversing course on his intent to retire.

Instead, he’ll race for at least two more years with Stewart-Haas Racing, as sponsor Smithfield will increase its allotment of races on the No. 10 Ford.

This year, Busch has been featured in his own cinematic documentary, Rowdy, and will be included in the USA Network docuseries Race for the Championship that premieres Thursday night, Sept. 1.

Earlier Saturday, I asked Busch what he had hoped audiences would take away about him from both projects.

His answer was one of someone who likely knew his “polarizing nature” might be holding him back among potential sponsor suitors.

“To me, I guess the humanizing [of] the villain,” Busch said. “I’d like to be known by a heck of a lot more than just what is on broadcast television each weekend or not on broadcast television. But to me, you know, I’m a husband, I’m a father, I’m a racer. And that’s all I’ve really known. I’ve grown up doing that.

“I’ve come from a blue collar family from Las Vegas where my dad was a Mac Tool man and didn’t come up from a lot. Obviously, trying to instill those same traits into my kids and how we go about what we do each and every week to go to the racetrack. So, for me, I would like to think that just showing the human side, humanizing myself and what is important to me, not just at the racetrack, but away from the racetrack.”

The last few weeks, Busch has seemed to be a more gracious, upbeat version of himself in general and in interviews.

When he started his press conference Saturday, Busch opened by poking fun at his current predicament and our obsession with his future.

“Hold on, first, I have an announcement to make,” Busch said. “Everybody ready? OK, there is no announcement. Good? We all good, we clear? Moving on.”

Wilson observed that over the last few weeks, Busch has been “an absolute prince” in public forums.

“He has been arguably charming,” Wilson added. “He knows how to to do that. And he knows that, at his core, that he’s auditioning for somebody. He’s well served to be that Kyle Busch. It’s been fun. […] It’s not just in front of you guys. It’s on an interpersonal level as well. And he is making an effort, he absolutely is.”

I asked Wilson where the struggle to keep Busch within Toyota’s ranks compared to other frustrations he’s dealt with since it entered the Cup Series in 2007.

He called it an “interesting question.”

“Of all the things that I am responsible for, what is most impactful to me are the people,” Wilson said. “It’s not the box score. It’s the people, the partners that we are engaged with in the sport. Kyle can be an unlikable individual. We all know how polarizing he is amongst our fan base.

“But he’s a human being as well. And we take this very seriously. We know how difficult this has been for him. And we put great responsibility on ourselves. I just want to see Kyle in a good place. I hope it’s with Toyota. But what’s most important is that he lands on his feet. And he and his family are in a good place.”

But each party’s vision of what the future will look like seems to be settling on a new reality, and all that’s missing is the press release.

At Watkins Glen International, Busch said there was a “big change coming” for him.

“Thankfully, there are opportunities out there,” Busch said. “There are Cup jobs available. But, again, it will not look the same as what it has [been] for the last 15 years.”

Wilson, for his part, said his hopes for keeping Busch weren’t just with an “offensive” strategy in mind.

“I don’t want to race against a pissed-off Kyle Busch,” Wilson said.

“But wherever he lands, he’s gonna do some damage.”

You can listen to David Wilson’s full media availability from Saturday in the podcast embed below.

2022 is Daniel McFadin’s ninth year covering NASCAR, with six years spent at NBC Sports. This is his second year writing columns for Frontstretch. His columns won third place in the National Motorsports Press Association awards for 2021. His work can also be found at SpeedSport.com. You can hear more from him on his podcast, Dropping the Hammer.

Rowdy-Ware Racing
Busch to the #51
Calling it now!

I don’t think Toyota and Reverend Joe want to sign him. Put somebody younger and cheaper and less controversial in the car.

Whomever gets Kyle Busch will win races and improve their other teams-period. I’m hoping for toyota but regardless this is a “goat” up for grabs.