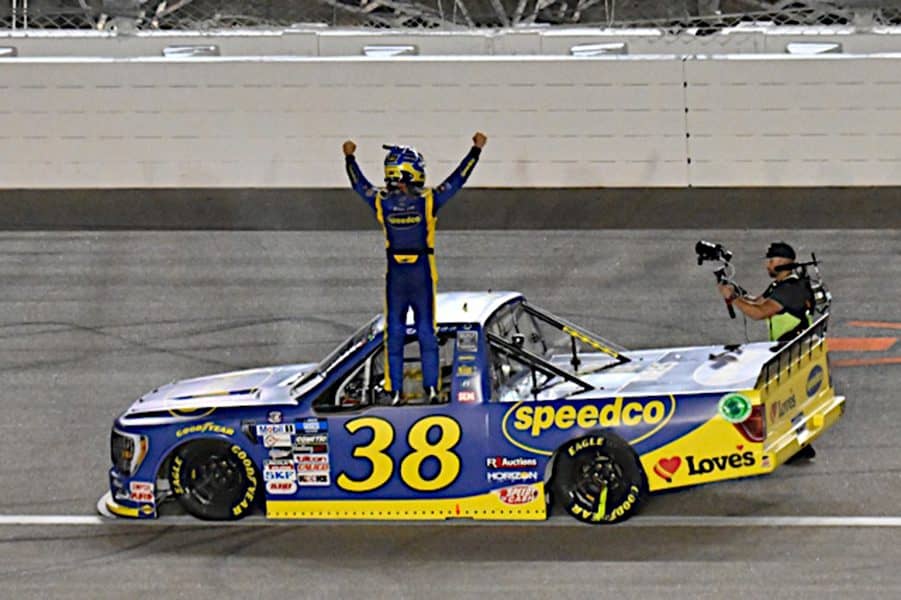 Within the press release, FRM doesn’t guarantee Xfinity starts and doesn’t plan to field an entry in the series at this time. Regardless, the intent by FRM to allow and potentially assist Smith to attempt Xfinity races next season is a welcome piece of news for Ford.

If Smith does indeed race in NASCAR’s second-tier series in 2023, where will he compete? Ford is exceptionally underrepresented in the Xfinity Series. Stewart-Haas Racing with Riley Herbst and RSS Racing with Ryan Sieg are the only full-time Ford drivers in 2022. SS Greenlight Racing has two full-time entries, but no drivers compete for the entire season.

Going with the assumption Smith will make these starts with a Ford team, where will he drive? SHR is the obvious choice if the opportunity is right for them. He may also race an SHR-prepared car for SS Greenlight, like Cole Custer and Chase Briscoe have done this season. Maybe even an SHR-prepared car for RSS Racing or a regular RSS car.

But what about a team that isn’t already racing in the series? What about RFK Racing?

RFK, formally known as Roush Fenway Racing, hasn’t competed in the Xfinity Series since 2018. The connection to Smith has already been established, as they tapped him to substitute for Chris Buescher at World Wide Technology Raceway when Buescher tested positive for COVID-19. The announcement came just days before first practice, leaving little time for preparation, but Smith wheeled the No. 17 Ford to a 17th-place finish after starting 32nd.

In the Xfinity Series, Ford and RFK are two sides of the same coin. Ford lacks a clear development program in NASCAR and RFK has nowhere to develop talent — driver or crew. Unlike Ford, its manufacturer adversaries Toyota and Chevrolet have a path for their development drivers to move up the NASCAR ladder. With Ford’s limited inventory of Xfinity teams, let alone cars, a part-time effort for a part-time driver is a perfect way to start rebuilding a program.

Why Smith? He performed well in his first two seasons in the Truck Series with a Chevrolet team, GMS Racing, scoring three victories in 45 starts and reaching the Championship 4 both seasons. Through 18 races in 2022 with Ford-aligned Front Row Motorsports, Smith scored three wins and won the regular season championship. Rewinding to 2019, Smith made 10 starts for JR Motorsports in the Xfinity Series and scored eight finishes of 11th or better.

Smith’s track record may still be short, but the history that does exist indicates he is a driver that has solid potential to one day compete for wins at NASCAR’s highest level.

Ford is outnumbered; therefore, adding cars to their stable only benefits existing Ford teams. While Ford had seven cars start in the 38-car field this past Friday (Aug. 26) at Daytona International Speedway, on a typical weekend, only one or two have a legitimate opportunity to win a race. While a non-superspeedway race may not require cars from the same manufacturer to work together to win, extra cars on track can help collect data and improve the performances of others.

Even 2020 NASCAR Xfinity Series champion Austin Cindric made fun of Ford’s lack of car count in NXS during his CNBC post-race interview from Sunday’s Cup race at Daytona. NBC Sports’ Parker Kligerman asked if he knew he was a “sitting duck,” as he was the only Ford surrounded by Chevrolets.

“I felt like I was Xfinity racing again,” Cindric replied.

The comment wasn’t meant to be malicious, but you wouldn’t think it’s a joke or analogy a manufacturer would want to hear.

What would RFK stand to benefit from opening an Xfinity team up again? One word: development. Talent development wouldn’t necessarily produce immediate results or promotions, especially from a part-time effort.

Whether the team is full or part-time, RFK may hire and recruit new personnel to work on the team that one day could be promoted to Cup. Or RFK could recruit and begin developing talent straight away.

The other potential benefit to RFK is that contracts can change, be broken or be bought out. Look at what’s happening with McLaren between IndyCar driver Alex Palou and Formula One reserve driver Oscar Piastri.

FRM’s team release stated “long-term agreement and plan for growth with the organization,” referring to Smith’s planned Cup and potential Xfinity starts in 2023. But how long is that long-term agreement good for? Smith noted it was through 2026, but there were options involved. Maybe RFK would be able to lease Smith from FRM much like it previously leased Buescher to JTG Daugherty Racing?

Why shouldn’t RFK use Smith to restart an Xfinity program? A part-time effort in 2023 could lead to a full-time effort in 2024 for the duo. And, as outlined above, Smith is no scrub behind the wheel. RFK would have a hard time finding a better driver available to start a team up with, even a full-time one.

With options for Smith limited in the Xfinity Series, Ford and Front Row Motorsports should look to create an option with the intention to grow a NXS team for seasons to come. With introductions already in place, the Ford development rebuild should begin in 2023 with a part-time marriage between RFK and Smith.

I would love to see more (manufacturer) diversity in Xfinity. Unless I missed something weren’t there 10 Fords in the Cup race, 4 SHR, 3 Penske, 2 FRM, and Wood Brothers?