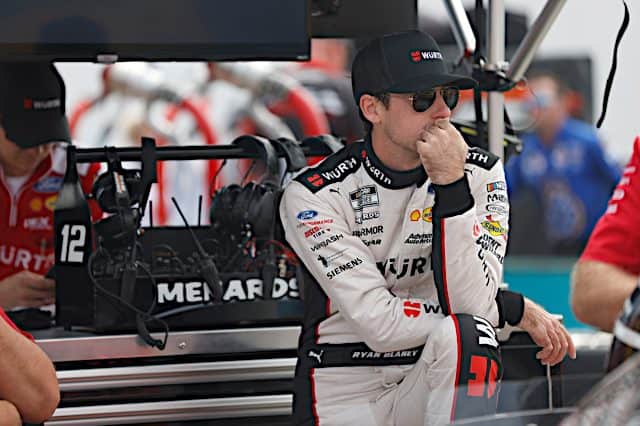 Ryan Blaney is the only winless driver in the NASCAR Cup Series playoffs. Does that matter? And how far will Blaney advance?

Anthony Damcott: Ryan Blaney’s consistency this season should give him confidence in attempting a deep playoff run. He also isn’t entering the playoffs with no points — his stage wins and finish in the regular season standings have given him 13 points to use throughout his run. While a win would be nice (not only for his championship bid but as a general confidence booster), Blaney and his team won’t have to worry about missing at least the Round of 12 if he continues that consistency. Once the season gets into the later rounds, then the pressure to win will rise, but to start the playoffs, Blaney will advance regardless of whether he wins or not.

Luken Glover: Blaney definitely needs to win a race in the postseason, more so to comfortably advance rather than to legitimize his playoff berth. Consistency-wise, Blaney has been one of the best this season. Additionally, he wouldn’t be the first to go winless in the regular season and go on a tear in the postseason. Remember Tony Stewart in 2011? Before the year began, my predictions included Blaney in the Championship 4. I am sticking true to that. The Round of 12 shapes up well for Blaney, with Texas Motor Speedway being the prime target. So does the Round of 8, where Blaney has run well at Las Vegas Motor Speedway and Martinsville Speedway.

Stephen Stumpf: Blaney being the only winless driver in the playoffs doesn’t matter; what does matter, however, is that the No. 12 has struggled to find consistent speed for months. In the first seven races, Blaney led 334 laps; he has led a combined 83 laps in the 19 races since. Furthermore, Blaney will have one of his worst tracks in Darlington Raceway as the playoff opener. After Darlington, however, Blaney will have tracks he has historically excelled at in Kansas Speedway and Bristol Motor Speedway. The season resets for everyone, and if Blaney can survive Darlington with a top-20 finish and make it out of the first round, he has a good chance of making it to the Round of 8.

See also
Up to Speed: Lady Luck Smiles on Ryan Blaney at Daytona

How can NASCAR change the Next Gen car to alleviate any safety concerns?

Stumpf: The unfortunate reality is that changes to the Next Gen car will not be coming fast enough. It took years to develop the car, and it’s going to take time and testing for any changes to the car to be cleared. Using the Gen-6 cars until they figured out the problems with the Next Gen chassis would have been a viable option, but unfortunately, most teams have already sold off the cars and equipment from last year.

Damcott: After Daytona International Speedway provided drivers such as Denny Hamlin, Bubba Wallace, and Daniel Suarez with likely the hardest hits they’ve taken in their careers (or at least in a long time), NASCAR has to look into the safety of the Next Gen car, specifically in the head and neck region. Hamlin said his jaw felt like a boxer had hit it. Kurt Busch … well, we all know that he’s taken hard hits this season. Week after week, it seems drivers report that they have taken the hardest hit of their career and have headaches the day after a race they crashed out in. If NASCAR’s going to focus on a specific part of the car to improve safety, it has to be the head and neck area, the area drivers are complaining about most.

Glover: The main concern is the absorption of energy. Instead of the cars taking the energy from impact, the energy is being transferred into the driver’s body. Think of it this way: When a car goes into a wall at 160 mph, the car comes to a stop but the driver’s body wants to keep going. That is where the energy is coming in. Christopher Bell said it mainly goes into the head area of the body. The cars are more durable, but it comes at the risk of the driver taking the brunt of the hit. NASCAR not only should focus on the external body but new innovations should be made for a safer head and neck restraint, as well as the seat.

Which Cup playoff driver is under the most pressure to perform at Darlington Raceway?

Glover: William Byron‘s name has to come up. Byron’s five top 10s are the second fewest among the playoff field and he is tied for the second-fewest top fives with four. Since his second win of the season at Martinsville, he has only recorded one top 10. That is 18 races with one top 10 in Hendrick Motorsports equipment. Adding to the pressure is the fact Byron has never advanced past the Round of 12. Where did his strongest run since that Martinsville win occur? At Darlington, where he was punted for the win by Joey Logano.

Stumpf: Kyle Larson. Even with two wins this season, it’s been a championship hangover from a year that saw him score 10 wins and lead 2,500-plus laps. Furthermore, Chase Elliott has established himself as Hendrick’s top driver in 2022 after playing second fiddle to Larson in 2021. The teams and drivers had their time to adjust to the Next Gen car in the first 26 races, but everything is on the line for the final 10. Will we see last year’s Larson or this year’s Larson going forward?

Damcott: If this was just one week prior, the easy answer for me would be Alex Bowman, because he was hot at the beginning of the season and has pretty much gone cold. But post-Daytona, the pressure is 100% on Austin Dillon now. Dillon got the Hail Mary victory NASCAR was hoping for when Daytona became the regular season finale; now, he has to prove that he belongs in the playoffs and advance out of the Round of 16. Otherwise, he was a waste of a spot. Someone like Martin Truex Jr. could have taken that opportunity and potentially made it to the Round of 8, so Dillon needs to prove that he deserved the right to compete for a championship.

After the ARCA Menards Series race at the Milwaukee Mile, Taylor Gray said the track deserves either a NASCAR Xfinity Series or NASCAR Camping World Truck Series race. Should NASCAR or the NTT IndyCar Series return to Milwaukee?

Damcott: At the very least, Milwaukee provided some great racing for the IndyCar Series. If any series were to return there, it should be IndyCar. Although after the success and great racing at Lucas Oil Indianapolis Raceway Park, the NASCAR Truck Series could potentially have a good turnout should it be added to the schedule. The common denominator is that Taylor Gray raced at both IRP and Milwaukee, so if he believes the Trucks should race there, he might believe the racing could be just as good as IRP was.

Stumpf: I mentioned the Milwaukee Mile in a previous column and ideas for its return to the NASCAR schedule. With the Xfinity Series presumably racing at Road America next year, a Wisconsin doubleheader with Xfinity at Road America Saturday afternoon and the Truck Series at Milwaukee on Saturday night would be a good way to generate fan interest in the weekend. A Cup Series race should also be considered for the future as well; it would add another unique oval to the schedule and it would at least alleviate the frustration of Wisconsinites who wanted Road America to remain on the Cup circuit.

Glover: Both NASCAR and IndyCar should return to the track. We have seen tracks similar to Milwaukee that feature multiple grooves and provide some exciting racing. It also helps add more diversity to the schedule, and that will help the track promotion and build-up. It would also be interesting to see a doubleheader between NASCAR and IndyCar at the track.

I think the driver most under the gun, is Chastain. No one will be able to lay back in the playoffs & be successful. He needs to keep doing what got him there but do it cleanly. Respect in Cup has to be earned, no one questions his talent, but his respect is in deeply in negative territory. He should be able to run for a lot more championships, but whether he advances, or gets eliminated. If he comes out of these 10 races W/O creating more negative drama. That would be a big leg up respect wise, going forward.