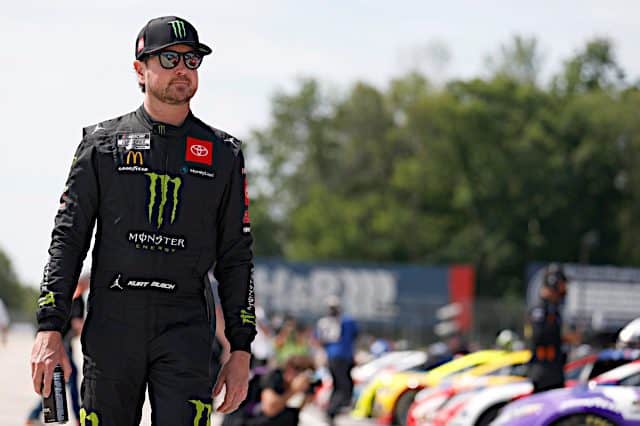 The weather has been a big topic this week in the world of racing. As amateur meteorologists, NASCAR fans and pundits have a unique perspective on weather and all the myriad of factors that contribute to its existence and output. Of course, this knowledge comes to the forefront only after Mother Nature has affected a NASCAR race.

This past weekend brought about another delightful example of NASCAR’s ongoing testy relationship with weather, or more specifically, rain. (Call it precipitation, the wet, a sprinkle, a drizzle, mizzle, Scotch mist, a shower, a rainstorm, cloudburst, torrent, downpour, deluge, squall, thunderstorm, or what have you, but please stop calling it weather. Weather is any atmospheric condition — a cloudless sky is also weather.)

So yes, the rain caused a bit of a calamity at the NASCAR Cup Series race at Daytona International Speedway, sending the leading cars scattershot as they drove into a sudden shower, ending the day for more than half the field and denying everyone the drama of watching said cars probably wreck again at the pack racing track.

Leading when the race halted, Austin Dillon stayed in front of the other nine cars on the lead lap when the race resumed three hours later and earned the win that put him in the playoffs. The regular season finale provided yet another winner, making it 16 on the season, with Ryan Blaney being the lone entry to make the playoffs on points. (Kurt Busch, who won at Kansas Speedway, rescinded his playoff eligibility waiver request, leaving two spots up for grabs at Daytona.)

Martin Truex Jr. almost took Blaney’s spot but his battered Toyota could do only so much. With other hobbled vehicles returning to the garage, he fell short by three points. Three measly points. Three effing points. Three positions over the course of 26 races.

To think that Truex missed because of three spots is both silly and staggering. However, for all the drama surrounding Truex and the fascination of will he/won’t he make the playoffs, the truth is, it doesn’t matter. Statistically and historically, Truex would have had little chance to hoist the big trophy at the end of the year. Dillon and Blaney donʻt have much of a shot at it either, for what it’s worth.

Consider that in 2004, when this experiment began with something called the Chase, Jeff Gordon “won” the regular season and slotted into first. Gordon had put together a stellar year with five wins and, under the previous scoring system, looked all but assured of walking away with his fifth championship.

But Gordon suffered during the final 10 Chase races, yo-yo-ing between top-three finishes, some in the teens and a 34th. Hendrick Motorsports teammate Jimmie Johnson won four races during the Chase and somehow still finished second, while Kurt Busch won one race and then finished outside the top 10 only once. Busch wound up champion with an eight-point gap over Johnson.

Busch had two wins on the year prior to the Chase, with Johnson nabbing four, which means the top three drivers collected 16 wins for the 2004 Cup season. Compare that to Truex and Blaney, who were both winless while trying to gain their playoff position.

But perhaps the overlooked aspect of the whole scenario is the aforementioned Busch.

Busch has been sidelined since his crash during qualifying at Pocono Raceway in July. He enjoyed the prospect of having a medical waiver that would have permitted him to race in the playoffs, much like his brother Kyle Busch did in 2015. Kurt, however, withdrew from the postseason this past weekend with lingering concussion symptoms, which put the spotlight on the playoffs again having two spots open rather than turning the focus to Busch and the safety of the 2022 racecar.

The debut of the latest generation of Cup car has earned its scrutiny throughout the season. The single lug nut design applied to attaching the wheels gained notoriety over the year, most commonly for wheels falling off or slow pit stops. But the whispers about the car being unsafe diminished as 2022 rolled on. While fears came through testing the car in 2021, early accidents in 2022 gave the appearance that criticisms were unfounded or overstated. Kurt Buschʻs absence provides evidence to the contrary.

Denny Hamlin also offers supporting evidence of safety concerns. Hamlin was one of the cars to first hit the rain at Daytona and served as a passenger as his Toyota pounded the wall.

Asked how he felt after being released from the infield medical center, Hamlin replied, “My jaw hurts. I feel like my jaw is one of those boxers that gets their whole face demolished. It was certainly the first real big one I’ve had in this car and everything they’ve been telling us, all the other drivers, it’s legit.”

Perhaps drivers have become too accustomed to crashes leaving little imprint on the body. That is not to suggest we want to see drivers harmed in any way, but rather, driving a car at 200 mph is always a risk. The fact drivers have been walking away with seemingly no ill effects is nothing if not a little bizarre. Hamlin’s response almost says that the law of averages played its hand.

See also
NASCAR Mailbox: Is This the Year of the Playoff Spoiler?

But Hamlin withdrawing from the upcoming Xfinity Series race this weekend at Darlington Raceway says something more. It’s a track where Hamlin rules (posting four wins and a career 7.8 average finish in Cup). It’s a NXS race that would have given him more track time, assisting in his preparation to open the playoffs.

In a release from Joe Gibbs Racing on Wednesday (Aug. 31), Hamlin stated, “I have had some soreness in my neck, back, and hips from the wreck on Sunday. I feel like the right thing for me to do is to sit out the Xfinity Series race and put 100 percent of my focus on getting ready for this weekend’s Cup Series playoff race.”

The issue here is oddly two-fold. First, NASCAR may have needed to be more judicious in how it handled the encroaching rain at Daytona. How they might have accomplished such a feat is a conundrum left to people with a deeper understanding of weather, track conditions, and race management.

It is quite possible that NASCAR did its best with what knowledge it had and that the outcome is one unworthy of laboring upon. Then again, NASCAR may need to look at how it handles the concept of “rain in the area.” There are certainly ways of determining whether precipitation is falling within a specified radius of the track which would then trigger a pause in the action.

Just the same, is the new car something that still needs work? It appears so. The stiffness built into it does not absorb enough of a crash impact, leaving the energy to find the weakest point: the driver. The crumple zones in the car do not mirror those from the previous generation and will likely become a focal point for redesign moving forward.

Unfortunately, that’s a little late to help out this season.

For a sport that has made brilliant moves in safety over the years (the SAFER barriers might be one of the best inventions in racing [with the HANS device coming in as 1B]), there seems to be some NASCAR backward thinking over the course of 2022. From the car, to letting drivers play smash-em derby at the Indianapolis Motor Speedway road course, to ignoring the threat of rain, there have been enough examples to think there is reason for concern.

That Kurt Busch will spend the rest of the year at home is not an outlier, it is a harbinger.

Very well written, factual and entertaining. The comments concerning the new car stiffness require a deeper dive by someone…anyone in the press willing to risk their hard card for an informative story. Keep up the good work…I’ll be looking for your by-line.

The problem is they always have and always will. “Safety” does mean something to the individuals, but for the business the spectacle is always in the driver’s seat. And sadly, from the all publicity is good publicity stand-point, injuries and fatalities bring more eyeballs. On the rain incident – if what the guys on DBC (they really went off on NASCAR on this one) said is accurate, they didn’t even have spotters on all corners of the track. Just some basic common sense might be a start. Thing about Daytona (and many of the tracks) is that one can see for miles to the horizon and rain is very easy to spot. Agree with John – good piece here.

Remember the fairly frequent, mysterious “debris cautions” where often the debris was invisible to the multiple TV cameras……….then followed by questions and criticism?
The New Hampshire rain-induced crash fest, was it 2 or 3 years ago? Now this Daytona debacle; would a preemptive rain caution when threatening conditions are that obvious be such a bad thing?

Austin Dillon did not lead all the laps after the three hour hour delay. Cindric did until Dillon, with his teammate Reddick pushing him, bumped Cindric out of the way going into the corner with 3 laps to go. Everyone knows it rains almost every afternoon in Florida this time of year, even the networks and nascar know it, but they don’t care. It is a spectacle.