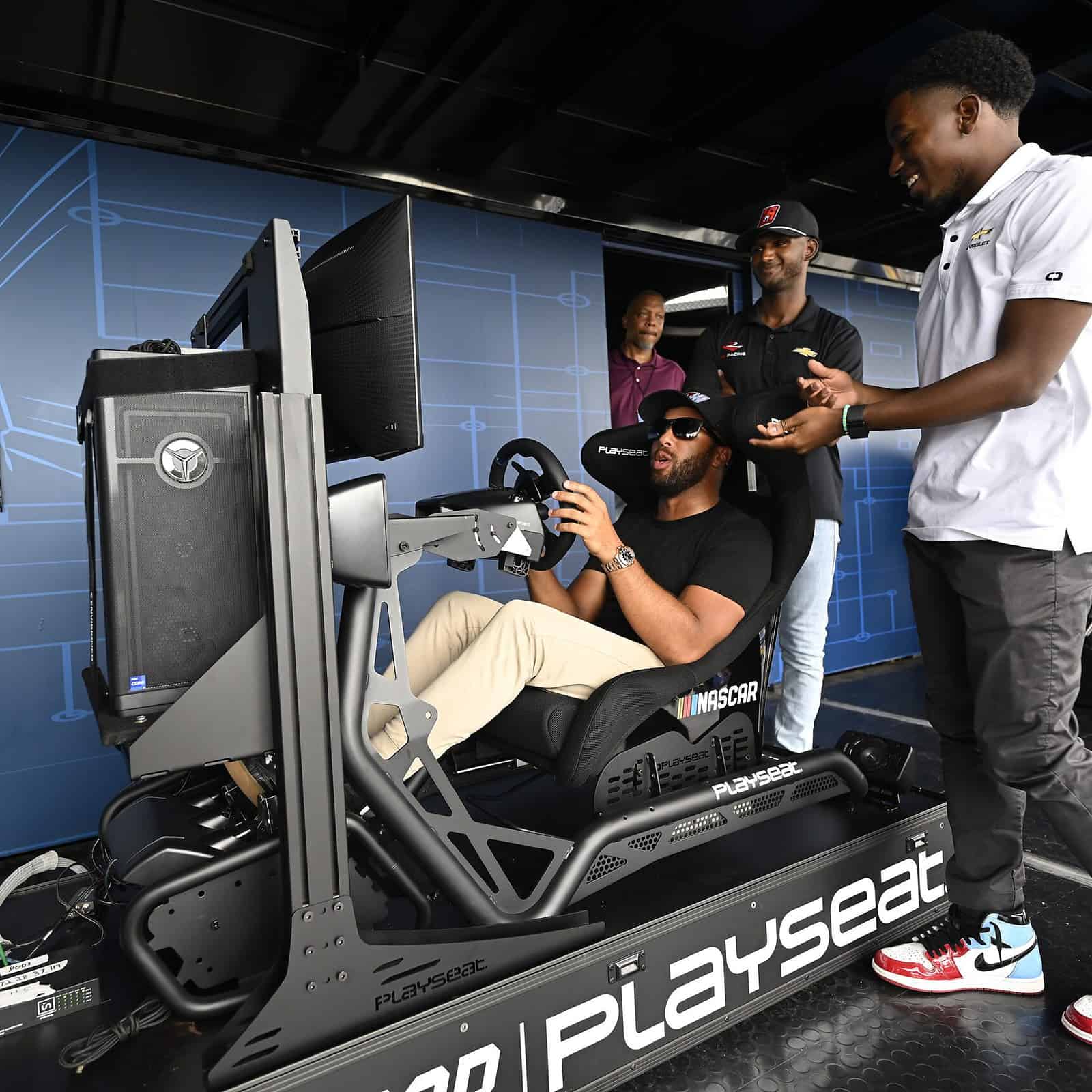 Bubba Wallace is all about having a good time. That’s exactly what he and many others did during the inaugural Bubba’s Block Party last month at Richmond Raceway, located in the suburbs of Richmond, Va.

In a partnership between NASCAR and Wallace, the event was designed to engage new fan audiences and bring local families to the racetrack ahead of a full weekend of stock car racing action, which included the NASCAR Camping World Truck Series and NASCAR Cup Series.

The Block Party was free to the public, though it was capped at roughly 2,000 fans, according to Wallace. At the event, those people got to experience NASCAR’s virtual iRacing on simulators, pit stop demonstrations and multi-platinum hip-hop artist Wale headlined the event with a live performance. There were also many Black-owned food trucks from the Richmond area.

“It was a deal that was like, ‘Why don’t we try this and let it marinate,'” Wallace recently said of the Block Party. “NASCAR jumped on it and wanted to see how we could go about it, what we could do. It’s a different demographic to be at the racetrack, which is really cool. Excited to see me, and not from a race fan standpoint, but from a person that they’ve heard about in recent years and they’re excited to be there and have Wale there to perform.

“The whole atmosphere was really cool and I actually enjoyed standing out there being a part of it.”

Wallace confirmed there will be another Block Party sometime in the playoffs, potentially at a track he’s performed well at in the past. He picked up his first Cup Series win at Talladega Superspeedway last fall.

Xfinity was excited about the event, too. Just a few weeks prior, the brand announced it will join Coca-Cola, Logitech, Playseat and Southern Computer Warehouse as a presenting sponsor for the upcoming eNASCAR College iRacing Series.

Qualifying for the series’ first race at virtual Homestead-Miami Speedway runs from Sept. 6-15. The race will be 80 laps, beginning at 8 p.m. ET on Tuesday, Sept. 20. Competitors will run Xfinity Series cars, replicating the look and feel of the real-life series that’s produced many of the current Cup Series stars battling for the championship.

“We agreed to partner with NASCAR as one of the presenting sponsors of their college iRacing tour,” Matt Lederer, Comcast’s vice president, brand partnerships and amplification, said. “When we stepped up, though, we didn’t want to do just another logo slap. While we felt it was a great cause that a lot of the money from the sponsorship elements goes directly to scholarships for the students participating, we were working really hard with them to see how is this bringing in new, younger fans and expanding it versus talking to the same people.”

The eNASCAR College iRacing Series will be a four-race series this fall. After Homestead, students will also tackle virtual Auto Club Speedway (Oct. 18), the Charlotte Motor Speedway ROVAL (Nov. 8) and Nashville Superspeedway (Nov. 29). During a three-race schedule in the spring series, students from more than 250 universities across the United States participated.

Xfinity, however, wanted to make an impact on HBCUs (historically black colleges and universities). As part of its partnership with the eNASCAR College iRacing Series, Xfinity will donate one simulator apiece to Bowie State University, Delaware State University, Texas Southern University and Spielman College throughout its HBCU college campus tour.

The tour is aimed to bring Xfinity directly to students, accomplished while working alongside NASCAR to bring a new, diverse fan base to racing. Those schools were chosen based on proximity to NASCAR tracks and areas that are important to Comcast as well.

“When we set that out as a mission, we brainstormed and said ‘In your iRacing Series, how many HBCU participants do you have?'” Lederer recalled. “The answer was zero to not many. So we said, the HBCUs, from our brand standpoint, are very important.

“We pulled all that together and said, ‘What if we do something special with the money for HBCUs to garner participation.’ We weren’t naïve to think that just by doing that, we were going to get people and change the profiles of participants. But, how can we change the profile of participants for next year, the year after, five years from now? [That’s the goal.]”

Rajah Caruth, also an HBCU student at Winston-Salem University, learned the sport of racing on a simulator. Currently, he sits third in the ARCA Menards Series championship standings, 16 points below his Rev Racing teammate Nick Sanchez with a handful of races to go in the 2022 season.

“It’s important for me to convey the significance of these donations,” Caruth said. “Most people don’t know this, but young drivers really hone their skills and learn the basics of the sport on these types of simulators, so these simulator donations will go a long way in teaching new fans the little nuances of driving that most people wouldn’t really understand.

“It’s such a great way to captivate HBCU students and encourage their NASCAR fandom by giving them an inside look at how the sport works.”

From support of its partners, the eNASCAR Scholarship Fund also returns for the fall schedule, awarding the highest finishers a combined $60,000 in scholarships.

Xfinity’s HBCU tour will make various stops at different institutions across the country. Events such as giveaways, photo opportunities and information about Xfinity products and services will be held, delivering a unique and interactive experience to each HBCU campus.

Interesting how Comcast/NBC is so eager to fund a grass-roots effort centered on a sport they won’t (don’t want to..) actually televise. Perhaps they have an ulterior motive here? Just wondering.