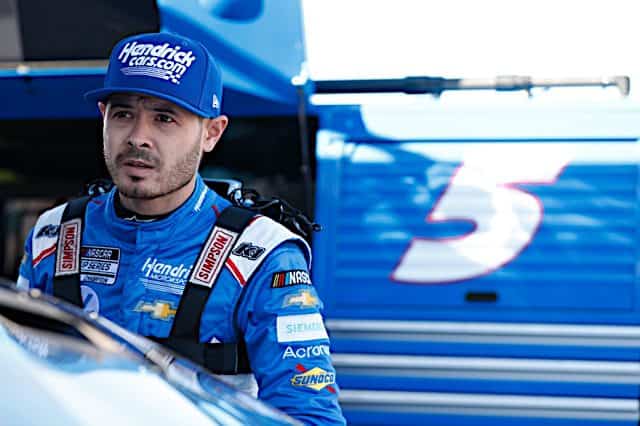 The NASCAR Cup Series playoffs are here, kicking off at Darlington Raceway. Let’s get your daily fantasy NASCAR DraftKings lineups ready for the Cook Out Southern 500, airing Sunday, Sept. 4 at 6 p.m. ET on USA Network.

Last time out at Darlington, tempers flared and mayhem ensued (which could be said for much of this season). Joey Logano led the most laps, but he had to chase down William Byron in the final moments. The No. 22 gave a bump to the No. 24, which wiggled out of the groove and into the wall with nearly one lap to go. Needless to say, Byron was a bit miffed about the way he was raced.

The May event also saw several contenders get knocked out of the race, including Ross Chastain (who lost it on his own in a single-car incident) along with Toyota drivers Martin Truex Jr. and Kurt Busch.

This week, we might see many playoff drivers be aggressive early as they try to rack up stage points. Others will likely charge late in the race to try to win their way into the next round. It makes things a bit tricky for daily fantasy, but as long as you stick with certain trends (like who’s done well at Darlington and throughout this year), you should be able to make some money Sunday night.

As usual, check out drivers’ practice times, especially if they run 10 or more laps, as these speeds can help show which ones might take care of their tires better than others over a long green-flag run. Just keep in mind that the weather and track temperature Saturday will be a bit different than the race itself.

Before I move on to this week’s picks, here are the results from my colleague Stephen Stumpf’s selections for Daytona International Speedway:

You know it’s bad when your best-scoring driver was the cheapest in the group. David Ragan survived the carnage and earned a top 10. Unfortunately, Brad Keselowski and Chase Elliott were caught up in crashes, earning negative DraftKings scores.

DraftKings Picks for 2022 Cook Out Southern 500

Kyle Larson is the most expensive driver on DraftKings, but I’m still starting with him in my initial lineup. In five of his last seven Darlington events, he placed third or second. That includes runner-up results in three straight starts (2019-2021). Last fall, Larson tried to video game his way by Denny Hamlin, but wound up just behind him. Still, he led 156 laps en route to the strong finish.

Though Larson had an early exit due to an expired engine in the May events this year, he still led 30 laps before that, so we know he had a fast car.

And while the No. 5 Hendrick Motorsports driver hasn’t had the same strength as last season, Larson did take home another victory two races ago at Watkins Glen International. He could have some momentum on his side going into this race at the Lady in Black.

However, if Larson doesn’t show as much speed in practice, beware due to his high price.

The rest of this roster is fairly balanced, meaning that I’m banking on someone (like Larson) to stay out front for the majority of laps. I went with Christopher Bell because of the speed he’s shown at some of the tracks that wear down tires this season. I mean, at Richmond Raceway, he nearly caught Kevin Harvick there at the end for a surprise victory. Bell’s good at managing his tires; I believe that’s also how he earned a victory at New Hampshire Motor Speedway in July, though that track isn’t as known for tire wear like Darlington is.

Some other tracks where the No. 20 Joe Gibbs Racing pilot has shined this season were at Dover Motor Speedway, where he placed fourth, and World Wide Technology Raceway at Gateway, ending in ninth. Gateway has a similar shape to Darlington, but doesn’t eat up tires as much; Dover, however, does wear down treads.

Oh yeah, at Darlington this year Bell was the only Toyota driver to finish in the top 10 (sixth), as the others had either crashed or had other problems.

Will Bell start the playoffs strong? If you think he will, you can place him in your DraftKings lineup.

Harvick has one of the most ridiculously good runs at the Track Too Tough to Tame. He’s finished in the top 10 in 13 consecutive races there, which includes three victories (twice in 2020). Just two of those results were outside the top five; it’s really insane to think how well he does there. Yet, somehow he’s under $9,000 on DraftKings. It’s a head scratcher, for sure.

Not only has Happy Harvick performed well at Darlington, but he also has caught fire in the last month. After going most of the season without a victory, he silenced the doubters with a win at Michigan International Speedway. Harvick then followed that up with another trophy at Richmond, becoming the first driver of the season to win back-to-back events. The veteran is still not finished at age 46, and I think he’s just getting started. Look for him to continue his strong run this Sunday at Darlington.

Unlike Harvick, Bubba Wallace has struggled at Darlington during much of his Cup career. His best finish there was a mediocre 16th in 2020. So why did I choose the No. 45 (formerly No. 23) 23XI Racing driver?

Well for one, he was in the top 10 for much of this year’s event before all heck broke loose off turn 2. Besides that, Wallace earned four straight top 10s between New Hampshire and Michigan. In fact, Wallace nearly won Michigan, but couldn’t get by Logano on the final restart and had to settle for second. The speed he’s displayed recently has me keeping an eye on him this weekend.

Most of Erik Jones’s success at the Lady in Black was when he drove for Furniture Row Racing or JGR from 2017-2020. His victory there came in 2019 with JGR after he led 79 circuits.

This year, we don’t really know where Jones would have finished in the No. 43 had he not gotten into Wallace in that big crash. But he looked like a potential top-10 contender or better. Jones also did well at Dover, earning a 10th-place finish after starting 25th, as well as Gateway (21st to seventh) and Michigan (eighth).

If Jones has some good pit stops and conserves his tires a bit, he should produce solid position differential for your roster.

Chris Buescher‘s results at Darlington varied, though he’s had several in the teens. However, last year he took home ninth place in each race, so you know he’s able to finish in the top 10.

This season, some of his top 10s came recently. At Richmond, Buescher began 18th and ended up third behind Harvick and Bell. He also claimed top 10s at four of the five road courses. And at Dover, the No. 17 RFK Racing wheelman began on the pole before coming home eighth.

Buescher should produce a good DraftKings score relative to his salary, as long as he doesn’t qualify in the top 10. Why? Position differential points are huge for these lower-priced drivers who don’t usually lead laps.