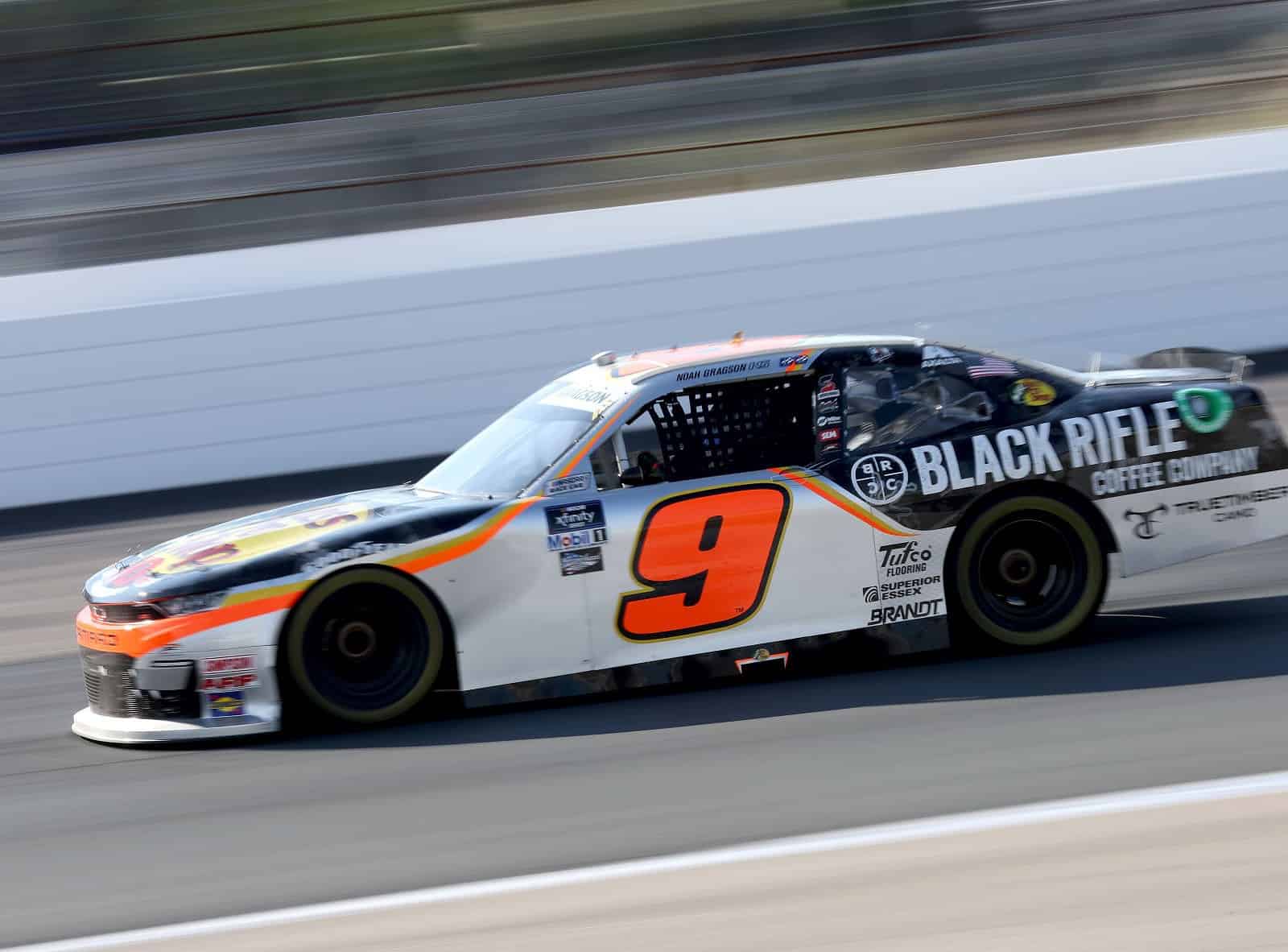 After some crashes, spins and a lengthy rain delay, Noah Gragson wound up on top in the NASCAR Xfinity Series’ Sport Clips Haircuts VFW Help a Hero 200 on Saturday (Sept. 3).

It was a tight battle between Sheldon Creed, who had the lead on the late restart, Gragson and Kyle Larson. Contact was made several times amongst all three drivers, and on the last lap, Creed got into the wall with sparks flying, allowing Gragson to get by him for the win.

“What a hell of a job by everybody on this Bass Pro Shop TrueTimber Black Rifle team…,” Gragson said after the race. “Sheldon Creed was really fast, really all the [JR Motorsports] cars, Justin Allgaier and Kyle Larson, Kyle came on strong there at the end. I watched during that rain delay him running the top in [turns] 1 and 2 and I knew there was a lot of speed there, so I went up there and I found something.

“Sheldon pinched me off and [No.] 17 got by me, then it was like three to go and I was like ‘oh, they’re gonna get into each other racing too hard.’ The [No.] 2, he’s got nothing to lose, he was racing his tail off and Kyle’s going for a win.”

Ty Gibbs ran sixth while his Joe Gibbs Racing teammate Christopher Bell, who started at the back due to an engine change, was seventh. Josh Berry, John Hunter Nemechek and Austin Hill completed the top 10.

This race was rather strange in the first couple of stages.

Actually, it started before the green flag waved. Ty Gibbs was warming up his tires and accidentally got into Allgaier. Both were able to continue on although Allgaier was unhappy over the incident.

Much of stage one was relatively quiet, save for some Darlington stripes. However, as the stage wound down, multiple cars had some trouble. First, Ryan Ellis and Joe Graf Jr. made contact with each other as the leaders, including Gragson, were going by.

Around the same time on lap 41, Larson had a flat tire and pitted, going two laps down as a result.

Gragson ended up winning stage one, and during the caution between stages one and two, another odd thing happened. Anthony Alfredo ran into the back of Nemechek, ruining the No. 23’s day.

“[…] Started to get sick in the car, everything happened really fast,” Alfredo told Frontstretch and other reporters. “I was catching the field, we were a penalty car after that pit stop and he was coming off pit road for the same reason. When I looked up, they were right there, I just tried to avoid them. I just really couldn’t do anything because I was getting sick in the car. Just an embarrassing incident but I don’t think I could have done anything because it all happened so fast.”

Alfredo also apologized to Nemechek and his team, as well as his own team.

Shortly after stage two got underway, several cars were involved in a big crash off turn 2. Myatt Snider got loose off the corner while Kris Wright slid into Graf. Snider spun and slid across the track and, as Riley Herbst tried to avoid him, the No. 98 slammed the inside wall, ending his race.

Trouble on the restart.

The Nos. 31, 68 and 98 are among those with damage. pic.twitter.com/cqhVrQIHBJ

Then the rains came, halting the competition just before the halfway point.

After a two-hour, 37-minute delay, the race got back underway on lap 78.

Allgaier took first over Gragson after the race restarted and won stage two under caution. Behind them, JJ Yeley’s car caught fire after his engine expired.

After some pit stops, the race went back to green and Creed ended up getting out ahead of Allgaier. A caution for a spun Brandon Jones brought the field back together, and though Creed held off Gragson on the restart, the No. 9 came charging back in the final laps en route to the victory.

Just two races are left before the Xfinity Series starts its playoffs. Up next is Kansas Speedway, airing on Saturday, Sept. 10 at 3 p.m. ET on USA Network.