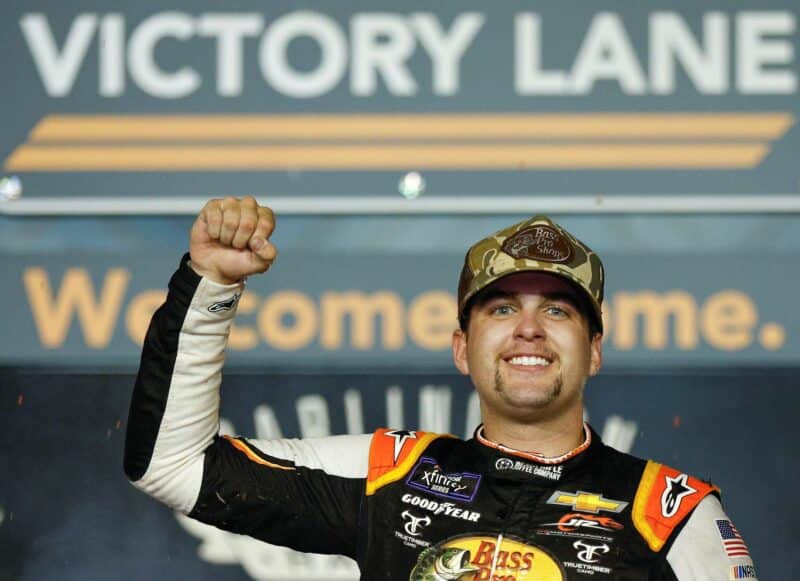 Noah Gragson came from third place to snatch a win away from Sheldon Creed and Kyle Larson on Saturday night (Sept. 3) when he won the Sports Clips Haircuts VFW Help a Hero 200 at Darlington Raceway.

In one of the most entertaining finishes the NASCAR Xfinity Series has offered in recent memory, Gragson was able to claim his fourth win of the season with Creed, AJ Allmendinger, Justin Allgaier and Larson rounding out the top five.

I can’t stress enough how important each race going forward is for Creed – I’ve said it for weeks – and tonight was the first time I saw him drive like he realized it, too.

Darlington has been very kind to JR Motorsports over the course of the 2022 season. Allgaier was able to take the win there earlier in the year. What’s more, though is Gragson finished second in that very same race. It puts both JRM drivers inside the top five in both races at The Lady in Black. If a keen stat fan was to zoom out a bit, they would also find Josh Berry inside the top 10 on Saturday. He brought the No. 8 Chevy home in eighth, a huge leap forward from where he finished the spring race (18th).

Aside from JRM, nobody really lived in the headlines on Saturday. Gragson has emerged as the current favorite for the Xfinity championship, but fellow frontrunner Ty Gibbs doesn’t appear to be going anywhere. He was knocking on the door of the leaders all race before bringing his No. 54 Toyota across the line in sixth.

In this sport, consistency is key, and JRM is the model of that right now. If they can keep their season-long hot streak going, it’ll force a very predictable (that doesn’t mean not fun) result as the season comes to a close.

I really do hate to beat a dead horse, but Creed gives us more to talk about each week. I mentioned earlier that Saturday was the first night I had seen him drive like a rookie on the playoff bubble – with nothing to lose. I mean that in all the best ways, but his best opportunity was probably snatched away from him tonight all because he got tangled up with a Cup driver who’s racing for nothing but pride and practice. The two were all smiles after the race, and props to Creed, but I don’t know if I would have been as well collected.

There’s no doubt this finish stole the show tonight, but don’t let it distract you from the fact that Brandon Jones, who won the pole position in qualifying earlier on Saturday, wound up bringing his ride home in 14th. Jones is already locked into the playoffs with his lone win earlier this season at Martinsville, but only one victory in a JGR car should be the floor. Jones has had moments this year that looked very bad, and some are even saying his days are numbered with JGR. While only time will truly tell, it’s a storyline I recommend following closely.

You knew it was coming. Ryan Ellis and Team Alpha Prime take home this week’s scheme of the week with this flaming-hot Jeff Gordon throwback scheme.

I didn’t enjoy seeing it near as much in the middle of the pack as I would have in the front (Ellis brought the car home in 22nd), but it was still absolutely gorgeous as most Gordon throwback schemes are.

While the other scheme that Alpha Prime brought to Darlington looked just as good, it’s the sentimental value that won it for me. I hated Gordon growing up, but now, at the ripe old age of 21, I’ve discovered a newfound respect not only for his skill as a driver, but also because of his bodacious paint scheme library.

Allmendinger’s top three bumped him up to a rather controlling 51-point lead in the points standings, while despite a second-place finish, Creed still sits on the outside of the bubble looking in. However, he’s moved to within a 16-point difference of the 12th spot and is heating up at the right time. We might see the rookie in the playoffs yet, but it’ll take a few more rolls of the Goodyear dice.

A full playoff and points breakdown can be found here.

There’s only one word to describe the feeling I had when I was watching that sprint to the finish: “Wow.”

We had crossovers, side drafting and wall hugging, and it all resulted in arguably the most amped-up rookie driver on the market getting crashed by a Cup Series driver that uses the Xfinity Series as nothing but some glorified practice laps. I get the prospect of having bigger names; in fact, I touched on it recently in another Breakdown.

This is the problem I have with it – the exact result of Saturday night. That race should have been between Gragson and Creed, two Xfinity full timers, not those two and a Cup Driver who just wants to add to the resume or make a few laps. Will NASCAR’s rules change in the near future? Absolutely not, but that doesn’t mean I have to like it. Check out that amazing finish here (you’ll be glad you did).

Kansas Speedway is next up on the chopping block for the Xfinity Series, and this one is as normal of a name as we’ve gotten all year, which is nice for brevity’s sake. The green flag for the Kansas Lottery 300 drops at 3:00 p.m. ET. It’s the first time the Xfinity Series has visited Kansas this year; Gibbs won last year’s race in the dwindling weeks of the 2021 playoffs. That race will be aired on USA, the Motor Racing Network and Sirius XM NASCAR Radio.

I was thinking the same thing as you pointed out in your last sentence. Creed lost maybe, his best chance to make the playoffs, due to a carpet bagging Cup team & driver fighting for a meaningless win. NASCAR has limited the number of times cup drivers can run Xfinity. They need to look at cutting off Cup drivers for say the last 5 races before the Xfinity playoffs begin. To let the playoff field sort itself out.

To be the best you gotta beat the best.