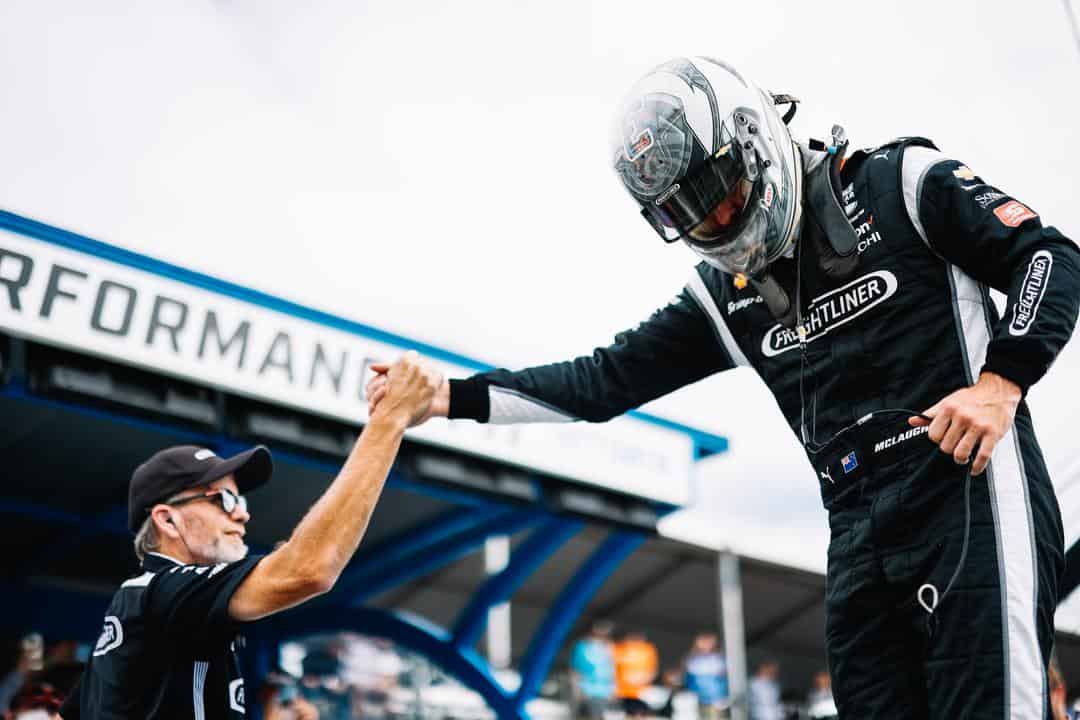 McLaughlin led the race from the pole and only relinquished his lead during pit cycles while teammate and championship leader Will Power spent much of the day just beyond an arm’s length of the leader’s rear wing.

“We did exactly what we needed to do this weekend, and that was win and get max points,” McLaughlin told NBC Sports.

Indeed, McLaughlin’s win serves to keep his championship aspirations alive at the last moment as the Kiwi now sits 41 points behind Power heading into the final race of the season at WeatherTech Raceway Laguna Seca. With 50 points on the table for a win – not to mention extra points for taking pole position, leading a single lap, and leading the most laps – McLaughlin maintains an outside chance at taking the title for his own in only his second season in IndyCar.

What a day for the #Thirsty3s.

Chip Ganassi Racing’s Scott Dixon quietly clawed through the field from a shocking 16th-place start to collect a third-place finish behind the Penske duo, bringing himself level with Josef Newgarden for second place in the title race, 20 points behind Power.

Newgarden suffered an underwhelming day after being handed a grid penalty due to an engine change. The two-time champion dragged his car as high as fourth place late in the race, though opting to use the black-walled Firestone primary tires for his final stint left the No. 2 Hitachi Chevrolet sinking like a stone toward race’s end. Newgarden crossed the line in eighth place.

Marcus Ericsson shared his Ganassi teammate’s qualifying disappointment, lining up 18th for the race. The Swede opted to start the race on primary tires and go off strategy relative to the rest of the field. This strategy, however, was undermined by the lack of cautions and on-track incidents through the first four-fifths of the race. Ericsson could only manage an 11th-place finish and will enter the final race of the season 39 points adrift of Power.

Continuing the championship drama, Arrow McLaren SP’s Pato O’Ward saw a promising day end in controversy following two on-track incidents in as many corners. Restarting the race with 23 laps to go, O’Ward made a late move on Power into turn 1, clobbering the right hand side of the Australian in the process.

As the two attempted to recover their cars on the exit of turn 2, O’Ward made a defensive move on a fast-approaching Dixon, that was deemed by race control to have been a move made in response to an approaching driver. O’Ward was ordered to concede the position to Dixon as a result.

O’Ward later took to Twitter to express his feelings regarding race control’s decision.

Pushed like hell today. P4 in the end #PortlandGP.

PS: @IndyCar I expect you to stand by your calls and when that kind of “block” is done to me… I will expect them to give me the position 🙃

Alex Palou joins O’Ward in falling out of championship contention after an underwhelming drive from fourth on the grid. The reigning champion made few waves throughout the race and ended the day in 12th.

The only caution of the race was triggered on lap 84 when Jimmie Johnson was put into the wall by a poorly-timed block from Rinus VeeKay. VeeKay, with a decisive speed advantage over Johnson, tried to cap off an overtake on the No. 48 a millisecond too soon. VeeKay’s left rear clipped Johnson’s right front and sent the seven-time NASCAR Cup Series champion into the wall approaching turn 1. VeeKay was later assessed a drive-through penalty as a result.

Rinus Veekay was penalized for this move that brought out the first caution of the day.

"This does not look like Jimmie Johnson's fault AT ALL." #INDYCAR pic.twitter.com/Qia5iwDNmr

Joining Johnson in retirement was Ed Carpenter Racing’s Conor Daly. Daly encountered a small residual fuel fire on pit exit during the race’s second set of pit stops; the fire burned out quickly, but the car’s clutch was compromised and forced Daly to retire on lap 71.

The 2022 NTT IndyCar Series season will come to a close on Sunday, Sept. 11, with the Firestone Grand Prix of Monterey at Laguna Seca. The race will be broadcast live on NBC at 3:30 p.m. ET.