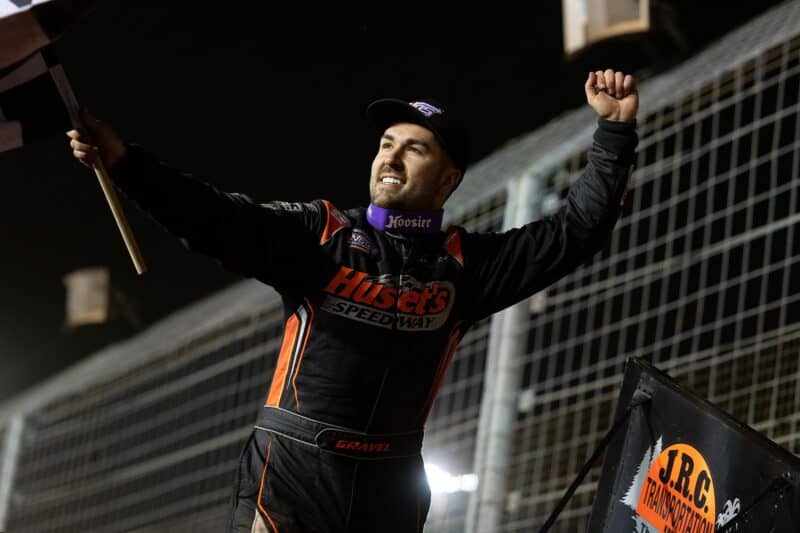 Sweet made the race-winning move a lap too early. Using the low side coming to the white flag, Sweet got alongside race leader Gravel coming down the frontstretch at Skagit Speedway but was unable to complete the pass, allowing Gravel to block Sweet’s line in the final set of corners and leaving Gravel to score his sixth WoO feature win in 2022.

While Gravel expressed joy in scoring a major-dollar victory (“I feel like I always win the $10,000-to-win features,” he quipped in victory lane), the bigger winner on the weekend was Sweet. Despite not visiting victory lane, he was the only driver in the Skagit Nationals field to score top-five finishes in all three features on the weekend, leaving Sweet to head to Gray’s Harbor with a healthy points lead over Gravel.

No, Sweet was not able to score a feature win during the Skagit Nationals. But it was a haul of a weekend nonetheless for the defending series champion, enduing with an average finish of 3.0, three heat wins, a dash win and two quick times in qualifying. That consistency is why Sweet is leading the charge for a fourth consecutive WoO crown.

Haudenschild’s win on Friday officially made 2022 the winningest season of his WoO career. Frankly, it was a deserved karmic result for the Stenhouse Marshall Racing team he competes for. Tragically this weekend, modified ace Nick Hoffman and his father were involved in a violent highway accident involving their hauler, hospitalizing both with significant injuries (both driver and father have improved in their condition over the last few days). It’s also notable because Haudenschild’s team owner Ricky Stenhouse Jr. paid for flights to get Hoffman’s family to the hospital.

I’ll be the first to admit Robbie Price was not anywhere on my radar screen to take over Jason Sides’s WoO ride after the owner/driver stepped out of the cockpit earlier this year. But after a long slog, the No. 7S team really is showing improvement with their new driver. A top-five finish on Saturday night coupled with a reduction in what DirtVision’s Chase Raudman dubs “bonus laps” (i.e. having to run B-Mains), Price and team are getting decidedly faster as the season winds down.

Along with Sweet and Haudenschild, Gravel, Carson Macedo, Donny Schatz and Jacob Allen all scored top-10 finishes in all three Skagit Nationals features. Allen also joined Sweet as the only drivers to win heat races on all three nights.

Teenage sprint car sensation Ryan Timms set the record last week for youngest driver to ever finish on a WoO podium, but he came crashing back to Earth in the Pacific Northwest. Missing Skagit Nationals features Thursday and Friday night by one spot in the last chance showdown events, Timms did qualify for Saturday’s feature but spun himself out early in the going, eventually finishing 18th.

McFadden was comfortably leading Friday night’s feature on a narrow racetrack and likely had the feature won before suffering a 10-cent part failure inside of 10 laps from the finish that parked his No. 83 car for the night.

Lakewood, Wash.’s Malachi Gemmer went 0 for 3 qualifying for Skagit Nationals features, with the only silver lining that the races got less eventful. Friday night, Gemmer suffered a flat tire in hot laps, but Thursday night saw Gemmer pull a slow-speed re-enactment of Steve Park Darlington 2001 when the rear brakes on the No. 06T car locked up, seeing Gemmer turn hard right towards the backstretch berm.

Alongside Gemmer, Bailey Jean and Jessie Attard were the other two drivers in the field to fail to qualify for all three Skagit Nationals features.

It took nearly two hours and 45 minutes between the start of DirtVision’s stream and the headline World of Outlaws sprint cars turning their first laps of actual racing in heats. Short-track 101, that’s totally unacceptable. For a two-class program to run nearly five hours, as Friday’s program did, was an abject failure of track prep. The WoO may be able to get away with such a misfire, but if this had been an unsanctioned 410 sprint car race, there’d be a lot of fans not coming back.

The coverage of Thursday’s Last Chance Showdown race was atrocious. Johnny Gibson was all over the race, giving a strong audio recap of the battle for the final transfer spot… only for the camera crew to spend nearly three full laps following leader Jesse Schlotfeldt despite said leader being in no traffic with no pressure from the back.

Hey @dirtvision It'd be cool if you showed more of the race than just the leaders ..👍

To their credit, DirtVision did correct this misfire over the course of the weekend.

Former WoO regular Kasey Kahne was nowhere to be found in his state of Washington this weekend. In fact, he was racing on an entirely different sprint car altogether out in Ohio.

After spending most of the season with the Outlaws @kaseykahne joined the @ASCoC and recorded a solid top ten last night at the Sharon Nationals. pic.twitter.com/vFL8nEWzij

Kahne’s “rookie” full-time campaign with the WoO, a season that he called a dream come true heading into Florida Speedweeks, has certainly been anything but smooth, with Kahne missing extended time in the spring after a violent crash at Volusia and enduring several other harsh crashes this summer. With Kahne reported to be sticking with the All-Star tour through next weekend at least, given that the tour’s upcoming Tuscarora 50 at Port Royal is paying $55,000 to win, it seems his days as an Outlaw are over.

The change of scenery did some good, with Kahne scoring a B-main win and a top-10 finish at Sharon Speedway Saturday night.

Minutes elapsed of DirtVision coverage before the World of Outlaws contested their first competitive laps on Friday night.

Where it Rated (on a scale of one to six cans with one a stinker and a six-pack an instant classic): We’ll give the Skagit Nationals three slightly chilled hard ciders. For a three-night World of Outlaws program, this one never really seemed to get up to speed, thanks in no small part to an uncooperative track surface that struggled to widen out (though Saturday night’s feature had a solid ending to it).

Up Next: Thinkin’ Dirty will be making a rare rendezvous with the All-Star Circuit of Champions, as Saturday night sees the Tuscarora 50 at Port Royal Speedway going off for a whopping $55,000 to win. Coverage can be found on Flo Racing.

I congratulate Kasey for going to All Star Sprint Cars. The comments above were a bit derogatory and the Sharon Speedway is in OHIO not Washington.

Hi Kid! The mistake on Sharon Speedway has been corrected. Thanks for reading and writing into Frontstretch, keeping us honest.

Good, glad it was an honest mistake. Thank you for changing it.