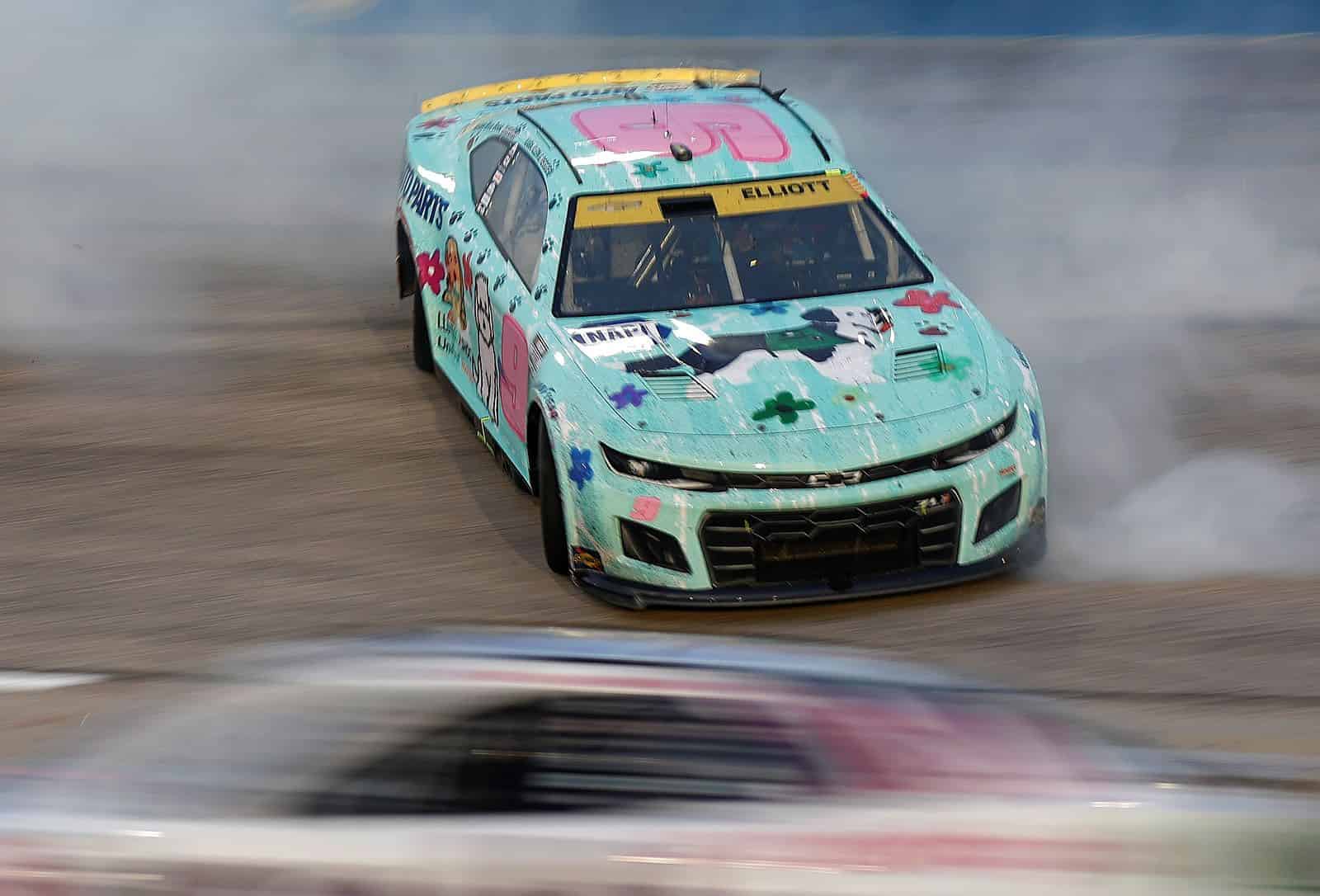 1. Is a Driver Boycott Needed To Get NASCAR’s Attention?

For all its upsides, the new car provided to teams in the NASCAR Cup Series has its glaring faults.

Kurt Busch has been unable to drive since a crash at Pocono Raceway. How severe are his injuries other than being enough for the concussion protocol to keep him sidelined? The silence is deafening, to say the least. Plus, the latest inexplicable issue arose Sunday night, with Kevin Harvick‘s car combusting out of nowhere.

The usually blunt Harvick gave his analysis of the state of the current car:

.@KevinHarvick didn't hold back about the new car and safety after his exit from the #Southern500:https://t.co/s34VO5yr52

Media rants and criticisms may get attention (we’re talking about it here, aren’t we?), but not much else.

It’s very clear that driver comments don’t get NASCAR’s attention. Sure, last July’s comments about the Atlanta repave and new car development process may have raised eyebrows, but not much else. But there is one thing that will – a driver boycott at Talladega Superspeedway, possibly a bit similar to what occurred in 1969.

See also
Up to Speed: The Tale of the Talladega Boycott, 50 Years Later

Given reports of drivers complaining more than before after hard hits, especially after Daytona International Speedway this summer, it should be a grave concern as NASCAR goes to Talladega in a few weeks as far as driver safety goes. It’s not feasible to cancel that race weekend (though, if needed, why not consider running Nashville Superspeedway or Barber Motorsports Park if they’re desperate), but it’s high time that drivers, owners, race teams and other stakeholders get on board and make it clear that they are serious about driver safety.

A driver from a Rick Ware Racing of the world sitting out Talladega would not move the needle in terms of attention, but if it’s a driver needing a good run at Talladega to sew up a spot in the next round of the playoffs? That sure as heck would.

2. Is Kansas Speedway Make Or Break For SHR’s Postseason Hopes?

Momentum can be a cruel thing. A few weeks ago, with two wins in a row, Harvick’s No. 4 team carved itself into a dark horse to make a championship run. Now? With both Harvick and Stewart-Haas Racing teammate Chase Briscoe being among the bottom four drivers in the standings as the series heads to Kansas, you can easily argue that Kansas is a make-or-break weekend for SHR.

Harvick has been historically strong at Kansas – it’s one of the multiple tracks he’s won three races at. Given that track record, no pun intended, the resources and intel are in place for both the Nos. 4 and 14 to make a big step toward getting out of the postseason basement. They’ll need to, as going to the rough-and-tumble half-mile of Bristol to end the first round is a tough place to venture to if it’s a win-or-else scenario.

3. The Best Playoff Spoiler Season Ever?

Erik Jones already stole the playoff show with his win at Darlington Raceway, and had the No. 19 not had late-race issues, Martin Truex Jr. was on track to do so as well. The bottom line is that these playoffs have indirectly tossed red meat in front of drivers that did not make it in who are very capable of winning over these next nine races.

We know what Truex is capable of. Why not Jones? His average finish of 12.4 at Bristol leads all active drivers, and had he timed his move differently, he would’ve won this past spring at Talladega. Speaking of Talladega, Bubba Wallace won there last fall and had a top-five car earlier this year at Kansas.

When the postseason concept was introduced to NASCAR, one gripe was that it’d make other drivers feel forgotten. That’s anything but the case this year.

There is no disputing that among finishes in what’s known as the NASCAR Xfinity Series, Saturday’s slam-bang among Kyle Larson, Sheldon Creed and Noah Gragson was one for the ages. It was on par with March of 2003, when both Todd Bodine and Jamie McMurray slid sideways coming to the checkered flag a day after the epic Ricky Craven – Kurt Busch photo finish.

Creed and Larson laying it all on the line was great … except for one thing. That’s the fact that it may end up costing Creed a playoff spot. Larson racing in the Xfinity Series does as much good for the product as it did when Kyle Busch showed up and waxed the field. If a driver is out there trying to get laps on a new track, or help get an Xfinity program off the ground, that’s one thing.

But when that driver may end up very directly costing someone a postseason spot, that’s an issue. NASCAR has already put provisions in to prevent Cup drivers from being in Xfinity postseason races and the regular-season finale. But with the run-up also being intense, NASCAR should extend that out further to the final few events prior to the postseason field being set. There are plenty of chances during a season for a Cup driver to dip down to Xfinity, but the final rush for a postseason spot is not one of them.

5. Why Isn’t The Throwback Weekend In September?

I can’t think of a better way to start the NASCAR playoffs than Darlington. In an era of glitz and glamour, opening the playoffs at racing’s version of Fenway Park is a perfect nod to the sport’s history with the drivers being tested mentally and physically over 500 miles.

But there is one thing missing: the throwback weekend.

Formerly on Labor Day Weekend, throwback festivities were shifted to the spring event. And, while it gave that weekend a hook to promote, it’s hard to think of NASCAR tradition and a springtime throwback event at Darlington in the same breath.

The media buzz around paint schemes, firesuits and crew uniforms dominates the conversation going to throwback weekend, and it’d make the start of the postseason all the more exciting.

If you are going to have a true throwback weekend, it belongs at the Southern 500.

NASCAR never seems to be able to get out of their own way, with or without BZF. We all use the nebulous term “NASCAR” but what name is responsible for the lack of response and deaf ears? Who is accountable? I’m liking the idea of a boycott. Just sayin’.

What passes for the “off season” in NASCAR is the time for the drivers & owners to enter into some serious discussions with NASCAR about all the things they take issue with. That some changes are needed in various areas is evident. Not saying that NASCAR would agree to everything, but I think that’s the best time. That way if changes are made, they wouldn’t have to be made in mid-season.

Kevin Harvick needs to quit being selfish and realize how a few dead or disabled drivers will really boost media coverage and online clicks for NA$CAR! All drivers should consider their own health and well being a small sacrifice to make in NA$CAR’s effort to grow the brand and rake in more cash.

lmbo, yes Na$car.
Woke and asleep and the same time.

Excluding Darlington, Creed will have had 25 other races to make the Playoffs. While that might’ve been his best shot, one race where there were somewhat dubious circumstances shouldn’t really matter if you put together a solid regular season overall.

This year with everything happening and drivers and crews are not responsible, stinks. Even worse when your trying for playoffs not good. Also if you can drive your car or fix it your done, ridiculous.

No way NASCAR wants the “Throwback” race to be the same weekend as the start of the Playoffs. It’s all Playoffers all the time-ok, 95% of the time.

DoninAJax
Reply to  Robert B.

The musing of who will get in next year will start the day after the last event if not at the end of the last event. It’s never too early for the hype or too much.