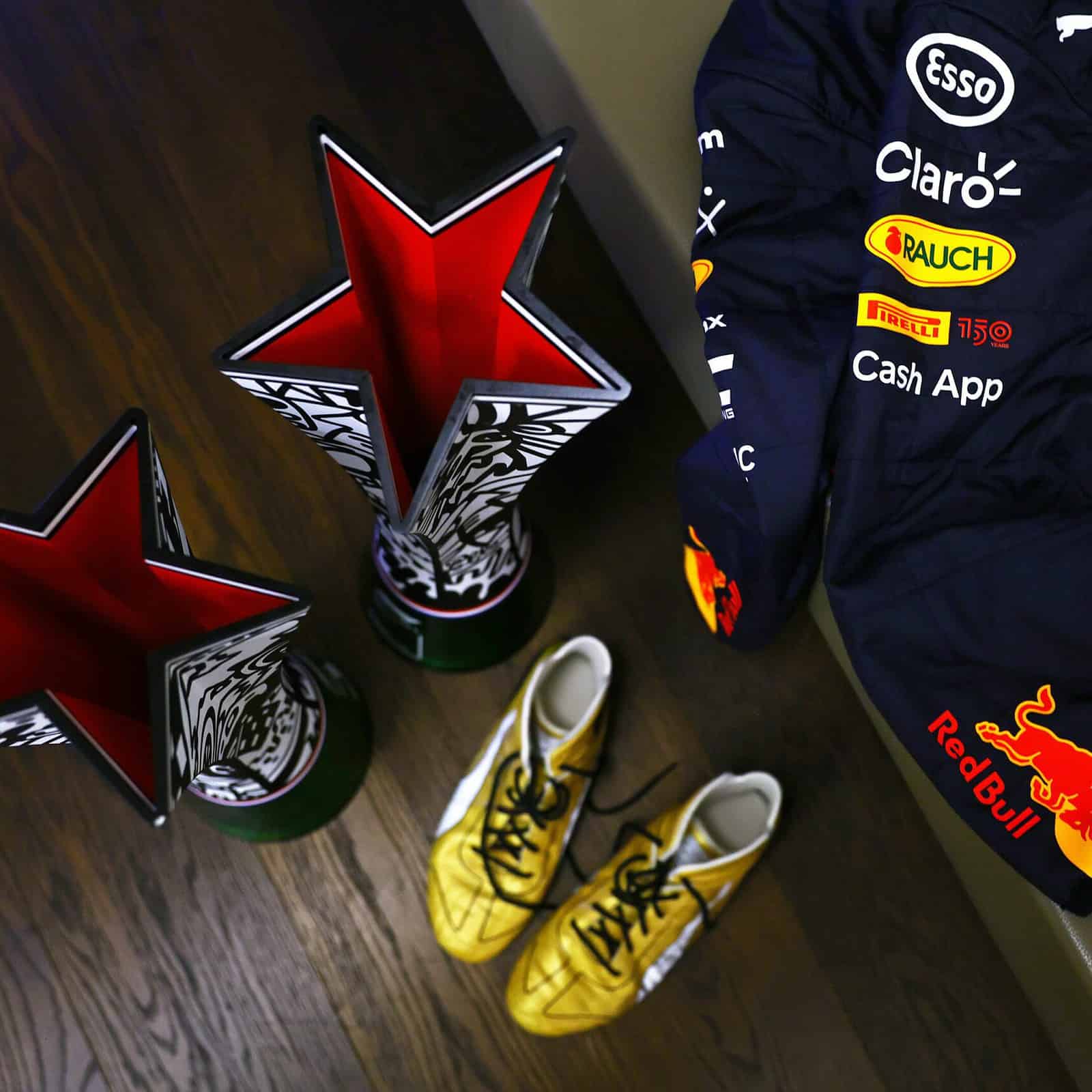 ZANDVOORT, NETHERLANDS - SEPTEMBER 04: The race boots, race overalls and winners trophies of Max Verstappen of the Netherlands and Oracle Red Bull Racing are pictured after the F1 Grand Prix of The Netherlands at Circuit Zandvoort on September 04, 2022 in Zandvoort, Netherlands. (Photo by Mark Thompson/Getty Images) // Getty Images / Red Bull Content Pool // SI202209040649 // Usage for editorial use only //

Sunday’s (Sept. 4) Dutch Grand Prix brought all the common 2022 Formula One storylines but, as with most things, without bringing fresh takes, the story grows old. The commanding F1 thread of the season has been Max Verstappen’s dominance out front and, during his second home race in two weeks, he looked in control from the moment the lights went out.

For a moment, Mercedes appeared as if it might thwart another Verstappen victory, but the team gave it away after a late safety car period. With the green flag restarting the race, Verstappen cruised to his 10th win of the year and 30th of his career. He also moved into the top 10 in F1 laps led and, at age 24, looks like he is a future challenger to Lewis Hamilton‘s lofty records.

Verstappen’s win is making a quest for his second championship all but a formality. With Sergio Perez finishing fifth, the gap opens up so that Verstappen could clinch the title as early as the Japanese Grand Prix a full month before the end of the season. That the Ferraris keep dropping points (more on that in a bit) is only helping Verstappen’s cause.

The Mercedes flicker to challenge Verstappen ended with George Russell taking second on the day. In similar fashion, Ferrari played a game with itself and managed to get only Charles Leclerc on the podium in third.

Hamilton fumed during the last stint of the race as he started in first and dropped to fourth, ruing what might have been during a winless 2022. After Perez, Fernando Alonso scored sixth in a drive that may have been a stellar example of having your elbows out.

Lando Norris put together a solid effort in what is increasingly looking like a troubled McLaren, scoring seventh on the day. Carlos Sainz had a day to forget even with an eighth-place result.

Esteban Ocon grabbed ninth and – coupled with Alonso’s result – stretched Alpine’s lead over McLaren in the constructors’ title fight for fourth (125–101). Lance Stroll grabbed the final points-paying position on the day, only his fifth top 10 on the year.

Verstappen took control early, with Leclerc and Sainz giving chase. Hamilton attempted a pass on Sainz going into turn 1 but made contact, showed some oversteer and then slotted into fourth. For the most part, the rest of the field fell into positions rather cleanly with only a couple of drivers moving forward.

The first hiccup of the day came when Sainz pitted and Ferrari forgot to bring out all four tires. The resulting error dropped Sainz from a podium position and put him back to battling in midfield.

Mercedes, starting both drivers on medium tires rather than softs, and with decent pace for a change, kept their teams out longer than the frontrunners and used the advantage to make gains for both drivers.

The prospect of Verstappen having to stop for tires late and then having to pass Hamilton, if not both Russell and Hamilton, began to blossom as a potential reality with the differing strategies unfolding.

That is, of course, until the Yuki Tsunoda J-Drama started.

In episode one, Tsunoda stopped on track and declared his tires were not properly affixed.

In episode two, Tsunoda then drove away from his stopping point at minimal pace and brought confusion as to what was happening with either him or his car.

The ensuing yellow-flag period changed the strategies of many teams as to how they would approach the last 20 laps of the race.

In episode three, our protagonist Tsunoda returned to the pits where the team checked his tires and tightened his seatbelts.

In episode four, Tsunoda again stopped on track, this time earning a DNF and bringing out the safety car to remove his Alpha Tauri.

Through the pit stop shenanigans and confusion, Hamilton ended up in second behind Verstappen and any ostensible drama got removed.

Meanwhile, the four-episode Tsunoda Show is a curious and vital viewing for F1 fans and warrants repeated scrutiny. Critics have labeled it a mysterious and bizarre show with a plot line resembling those of the French New Wave era of the 1960s.

However, the Tsunoda Show interlude set up the Dutch GP for a Valtteri Bottas DNF that brought out a safety-car period. It was a twist that then scrambled the brains of strategists managing the front-running cars.  Verstappen led the charge of swapping onto soft tires, with everyone else following suit. The result left Hamilton as the lone driver on mediums, an easy target for everyone able to launch off at the restart.

The troubling element for Hamilton fans evinced itself as Mercedes brought Russell in for tires rather than putting him in position to serve as a blocker for Hamilton, potentially scoring a one-two for the team.

Instead, Verstappen blasted by, moving into P1 by turn 1 on the restart, and Hamilton began his fall to fourth. Russell could never challenge Verstappen and all of the late drama of the day fell victim to a storyline all too familiar throughout 2022.

Verstappen moved into the all-time top 10 list of lap leaders in Formula One. His 10th win also showcases a year that mirrors some of Hamilton’s best years in the sport. He is now in rare form and proving to be the driver taking the crown of F1 king, much like Hamilton did from Sebastian Vettel.

A 12-second pit stop spelled disaster for Sainz. For some reason, Ferrari failed to have a left-rear tire at the ready when Sainz entered the pits. The slow stop dropped Sainz from third into 11th at the time and set him on a drive through the field when he should have been competing for the podium. What Ferrari were thinking is something still up for questioning.

A pit stop to forget for Ferrari 😫#DutchGP #F1 pic.twitter.com/9KEykCkHLD

But Ferrari were not done ruining Sainz’s day. The team then earned him a five-second penalty for unsafe release during the last pit stop, the final nail in the coffin of an eighth-place performance. To say that Ferrari finds new ways of shooting itself in the foot is kind of like saying that pretzel logic is the team’s ideological mission statement.

Sky Sports pit reporter Ted Kravitz may have had the line of the day when he asked, “Is there any penalty that Ferrari don’t want to pick up today?” Well, Mr. Kravitz, given more time, there’s a high likelihood they could have found others to accumulate.

As usual, the response on Twitter came as brutal and funny.

For a year that has failed to measure anywhere near the usual lofty standards of Mercedes, the Dutch GP gave a glimpse of the team’s glory days. Hamilton and Russell were able to show speed usually associated with the Silver Arrows and they provided consternation, at the very least, to Red Bull for a good measure of laps. In addition, Mercedes showed the kind of ingenious strategy the team has often used to catapult their drivers to the front by starting both cars on medium tires. Unfortunately, the result is they out-thought themselves and botched the race.

Mercedes could have set themselves up for a potential race win but instead split the strategy between Hamilton and Russell so that they gave Verstappen an easy victory while also failing to place both drivers on the podium. What had looked like a team executing in brilliant fashion turned into one with Hamilton at a loss and the team looking like they had their collective thumbs up their butts.

A tough day on track for Lewis #DutchGP @MercedesAMGF1 pic.twitter.com/nPLKL90yYe

Further back, Zhou Guanyu grabbed a penalty for speeding in the pits. On the surface, this comment looks like one that should be followed with: So what? But this infraction is his second in the past two races, with Leclerc doing so at the Belgian GP. Again: So what?

The reason for addressing the penalty is to point out that pit lane speeding penalties are exceedingly rare. There’s probably a better chance of seeing a UFO than seeing another speeding penalty this year. Should another occur during the final seven races, there will definitely be reason to investigate.

Tsunoda grinds to a halt saying his tyres weren't fitted properly at his pit stop.

A Safety Car looks likely before the Japanese racer gets going and back to the pits again. #DutchGP #F1 pic.twitter.com/j9z6nToryN

Tsunoda comes back in to the pits for running repairs before coming out again and immediately encountering problems again. He's parked up at the side of the track.

The conspiracy theorists see the Tsunoda Show as Red Bull using their associate team to aid in getting Verstappen the easy pit stop needed, blocking Hamilton from scoring his first win of the year. The whole thing looks dodgy and there is reason to feel uncomfortable with the outcome but that would be a lot of race management by Red Bull.

–Sky Sports debuted a new graphic during their broadcast that showed the distance from one car to another, coming from the trailing car. The information offered both meters and time, giving perspective into the gaps between cars from the driver.

Mercedes F1 boss Toto Wolff is going deep with his one: “With Lewis ahead, you can do two things: you can either pit him, lose track position against Verstappen and leave George out – screwed.”

Sergio Perez was pretty obvious about his situation that went awry. “Obviously, this is a great day for the Team but it wasn’t the best day at the office for me.”