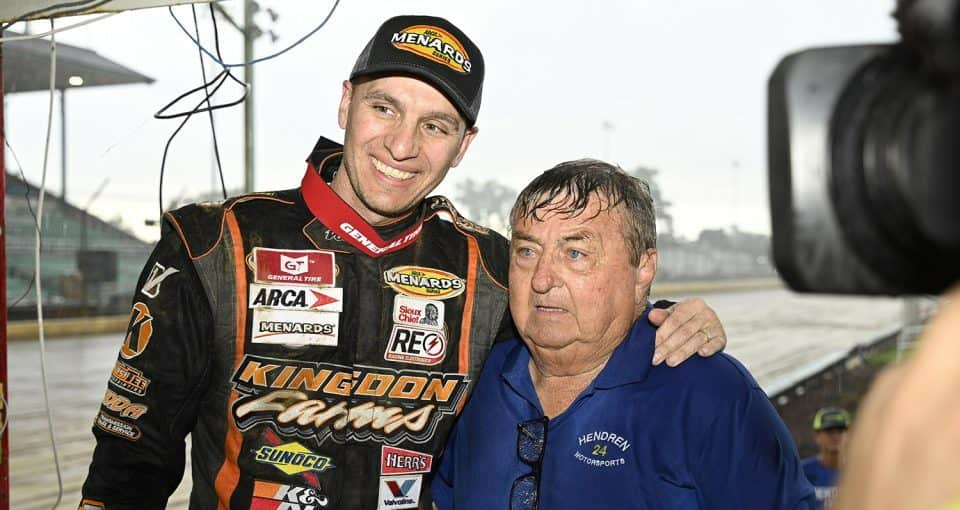 Ryan Unzicker sent his retiring ARCA Menards Series team owner Bill Hendren out on a high note. Unzicker led the most laps in the Rust-Oleum Automotive Finishes 100 en route to winning the rain-shortened event at the DuQuoin State Fairgrounds on Monday (September 5).

Unzicker earned his second career ARCA victory. He notched his first one at the other ARCA dirt track, the Illinois State Fairgrounds, in the 2020 campaign.

Unzicker held off Jesse Love, who thoroughly rebounded from some mechanical gremlins, on the last restart before the skies opened on the 1-mile dirt track in DuQuoin, Ill.

“It was a tough one, really,” Unzicker victoriously told MAVTV pit reporter Mike Massaro. “I just really had to rely on my General Tires to get the grip off the restart and get down into [turn] one. I knew I tried to beat him into [turn] one but he had a heck of a good run. Coming off [turn] two, I slipped up a little bit and went high because there was a little bit of rain back there and he was able to get all the way underneath us down the backstretch. Somehow I got it pulled off there. Can’t thank Hendren Motorsports and the whole team, everybody with MAVTV, and ARCA Menards [Series].”

On the outside, @jesselovejr1 goes for it!

But @unzicker24 holds on and pulls away!

“It’s a lot,” Unzicker said about the victory for Hendren Motorsports. “It really is. We’ve been doing it for a long time. Hate to see it be my last one but this man right here gave me every confidence in the world to come out here and allowed me to drive his car and it just means the world to me to be able to end on a good note for his sake and the whole Hendren Motorsports team.

“That’s how good he is,” Hendren said. “The car was ok but he’s so good. We would’ve quit a long time ago if it weren’t for Ryan. He’s just the kind of guy he is.”

It's a storybook ending in @DQStateFair!

In his final race as a car owner, Bill Hendren celebrates in victory lane with @unzicker24@MAVTV | @FloRacing pic.twitter.com/qsBoEAhGFZ

Thanks to his victory earlier this season at the Illinois State Fairgrounds and his runner-up finish in the second dirt track event, Love won the Performance Seed Dirt Double, claiming a $5,000 prize.

“First of all, all glory to God and my No. 20 JBL Toyota team for sticking with it,” Love said post-race. “Obviously we battled back from butterflies… we lost the lead then I stuck it out and then the next caution we came down and fixed it, then went a lap or two down. We battled back from that; finally, on the last stage we were on the lead lap and I could start to make up some ground again.

But yeah, like you said, that last restart, I wanted to win really bad. I entered turn one and it was wet and I went straight to the fence. I was like, ‘Oh my gosh.’ So I slammed on the gas and get it pointed straight. Then he slid up and I tried to cross him over. Then we dragged raced out down on turn three. I let him run me in too narrow. I could’ve done more to win the race. I let my guys down and don’t take that lightly. Today was on me. I had a fast racecar; I could not be more proud of my team. If I could do it again, I sure as hell would’ve done some things differently. Learned from it, lived from it, and move on from it.

Love wound up in second, but his rebound didn’t come without incident. Love spun his Venturini Motorsports teammate Corey Heim, who had top-five speed in his No. 15 Toyota.

Back under yellow at @DQStateFair.@CoreyHeim_ goes around off the front bumper of teammate @jesselovejr1.@unzicker24 is trying to hold on for a storybook ending with Bill Hendren.@MAVTV | @FloRacing pic.twitter.com/8Wsphg3TuU

Heim then added insult to injury when ARCA officials deemed Heim intentionally brought out a caution, necessitating a five-lap penalty. Even with the penalty, Heim still finished ninth, partly indicative of the number of drivers with DNFs.

ARCA officials postponed the 100-lap race from Sunday to Monday due to the poor quality of the dirt track due to inclement weather earlier in the weekend.

On Monday, everyone knew it could be a battle against Mother Nature, and series officials opted to both cancel qualifying as well as move the race start time up by one hour.

The move paid dividends, as 78 laps were completed in the event, though the track condition still resulted in only 10 drivers running at the finish.

Within the first few laps, championship contenders Dye and Rajah Caruth collided, simultaneously as Buck Stevens saw his race end when his No. 44 slammed into the outside wall.

“I mean, I don’t know,” Caruth said, clearly dejected after his DNF resulted in a 17th place finish. “I just was easy on the brakes in the corner because I know the noses can catch. I don’t feel like I applied that much pressure. Guess it just dug in, I thought, like everybody else dug in and it ripped the radiator out of it. So it really stinks.

“It’s rough, rough as hell,” he said about the track. “Nevertheless, our Max Siegel Chevy was good. You know I messed up early there and spun. We made a change when we came back in and checked our damage and [I] passed some guys and felt pretty good with what I had. But really sucks with getting the nose caught. The track, man, I don’t know why it wasn’t prepped yesterday when we had all day and it was all sunny. I don’t know – stuff out of my control. It’s nothing I can really do about it.”

The track condition also claimed Taylor Gray‘s No. 17 as its engine expired. Gray, a three-time winner this year, ended up with a 12th place DNF.

“That’s the product you get when you bring stock cars to a dirt track and don’t prep the track properly,” Gray said. “I’m going to use a little bit of Kyle Busch’s terminology and say, ‘The sun’s going to come up tomorrow.’ We’ll go fight at Bristol [Motor Speedway] and go win some more races this year.”

With four races remaining in the ARCA season, Dye gained one spot on Sanchez in the championship standings whereas Caruth lost 12 points.

After the second ARCA dirt track event, the field will head to Kansas Speedway, the only circuit the field visits twice in 2022. The Kansas 150 will take place on Saturday, September 10 at 7 p.m. ET with TV coverage provided by MAVTV Motorsports Network and available on FloRacing.