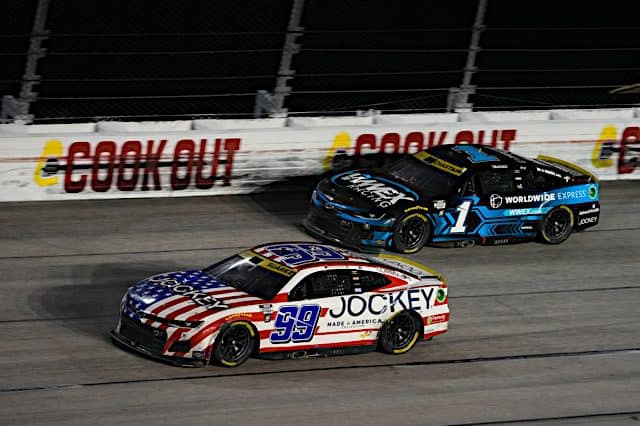 One of the biggest storylines of the 2022 NASCAR season continues to be the ascendance of Trackhouse Racing Team. The organization, which debuted last year with Daniel Suarez, purchased Chip Ganassi’s NASCAR team over the offseason and added a second car for Ross Chastain. Taking full advantage of the Next Gen car and a pair of drivers with something to prove, Trackhouse had an excellent regular season. Both drivers scored their first wins at the Cup Series level. Chastain picked up an additional victory and climbed as high as second in overall points. With two cars in the playoffs, Trackhouse has already surpassed most people’s preseason expectations for 2022.

However, the road only gets more difficult from here. As strong as Trackhouse has been this season, sustaining the same level of performance that propelled Chastain and Suarez into the postseason is going to be a massive challenge. It might be impossible. Trackhouse may have a lot going for it in 2022, but, compared to its competition, the team lacks one major weapon in its arsenal – playoff experience.

Through its first eight years in the Cup Series, the elimination-style playoffs have usually produced champions and strong contenders who have a lot of experience racing at NASCAR’s highest level. Newcomers don’t stay in the title hunt for very long.

Consider that, from 2014-2021, the least-experienced driver to reach the championship race was Chase Elliott in 2020. Elliott was in his fifth full-time season at that point and wound up winning the title in a minor upset. Yet, aside from Elliott the last two years, Kyle Larson in 2021 (another champion) and Joey Logano in 2014, nobody else has reached the championship race without at least seven previous years of full-time Cup Series experience. Chastain is only in his fourth season running the majority of the Cup Series schedule, while Suarez is in his sixth year. Based on past trends, getting either driver to the championship race will be a tall task.

Not to mention that Elliott, Larson and Logano all made their championship race appearances with organizations like Hendrick Motorsports and Team Penske. Even though the drivers themselves might have been inexperienced, Rick Hendrick and Roger Penske have been mainstays in the NASCAR garage for decades. Championship battles are old hat for both teams.

Trackhouse, on the other hand, is at a double disadvantage. The organization has never raced for a championship before, and its drivers have no experience in the Cup Series playoffs. Suarez did win the Xfinity Series title in 2016, the first year that division used an elimination-style playoff. Chastain has participated in the Xfinity Series playoffs twice, but the closest he’s come to a NASCAR national championship was in the Truck Series in 2019 when he made the championship race and finished second in points. However, the competition in the Cup Series is on a much higher level. It remains to be seen if Suarez, Chastain and Trackhouse are up to the task.

Even before the playoffs began, there were signs that Trackhouse was starting to cool off. Back in July, Chastain left New Hampshire Motor Speedway with his sixth consecutive top-10 finish and standing second in overall points. But in the last six races of the regular season, he and the No. 1 team didn’t score a single top 10. The cold streak dropped Chastain to sixth in overall points, a fall that cost him five additional playoff points for the beginning of the postseason.

Meanwhile, Suarez’s season continues to be a roller coaster ride. The No. 99 team followed up its Sonoma Raceway victory with four top 10s in five races. Then, just like Chastain, Suarez ran into trouble in the races leading up to the playoffs. His fifth-place run at Watkins Glen International was his only finish inside the top 15. Worst of all was the regular season finale at Daytona International Speedway, where Suarez took a bone-jarring hit in the big accident with 23 laps to go. Suarez had been battling for the lead at the time of the crash, but a sudden cloudburst over turn one destroyed most of the competitive cars, including the No. 99.

Trackhouse’s first playoff race, held this past weekend at Darlington Raceway, was a mixed bag. Suarez’s weekend got off to a bad start when the No. 99 team failed pre-race inspection three times, forcing Suarez to forfeit his qualifying opportunity and take a pass-through penalty at the start of the race. A brief rain shower five laps into the race got Suarez the free pass and back into contention almost immediately. As Suarez drove through the field, Chastain methodically worked his way forward and scored points in the first stage.

Then things started to unravel. Chastain had to make several unscheduled pit stops after debris damaged the No. 1 car’s suspension, knocking him off the lead lap. Suarez clawed his way back to the top 10 and earned points in the second stage. However, a pit road speeding penalty and an untimely caution when Kevin Harvick’s car caught fire buried Suarez deep in the field. In the end, Suarez and Chastain had to settle for 18th and 20th, respectively.

The next two races will be good tests to see if Trackhouse can recover. Suarez is now the bubble driver, just two points above the cut line. If he can stay out of trouble the next two weeks, he still has a good chance to get to the second round. But it would probably require a win for the No. 99 to go any further.

As for Chastain, he and the No. 1 team need to reassert themselves as a team that can challenge for a spot in the championship race. Much has been made this year about Chastain’s on-track altercations and whether or not competitors might deliver payback in the playoffs. Yet, at this point, Chastain’s string of mediocre finishes is a much bigger concern. If the No. 1 can’t run at the front of the pack, then Chastain won’t survive the playoffs even if his adversaries choose not to retaliate.

In other words, Trackhouse may have finally hit its ceiling for 2022. Chastain’s slump, Suarez’s inconsistency and an overall lack of experience will probably prevent the team from making a deep run through the postseason.

That said, there is only one playoff race in the books and a lot of laps left to run in 2022. If other teams falter, Trackhouse could still beat the odds and put a driver in the championship race. Even for a team that has spent all year defying expectations, that would be a truly special accomplishment.

Chastain is going to win this championship.

The field won’t let him. He’s also been awful over the last month and a half.

He was the fastest guy on the track and headed to the front until they screwed up his rear wheel. I also don’t buy into the field won’t let him stuff either. The playoffs are a complete reset and nobody has time for regular season grudges with so much at stake. You go punting someone purposely that is in contention just because you got your feelings hurt months ago and I think it will come back to haunt you.

Thing is, most of the guys he upset(Blaney, Hamlin, Kyle Busch) likely will be in contention. Even if they don’t intentionally wreck him, they certainly won’t cut him a break, and they will likely give him a dose of his own medicine if they get a chance.

Love his talent, but I dislike how he throws around his car into others with little to no change in his driving style after wrecking a good amount of guys over the years.