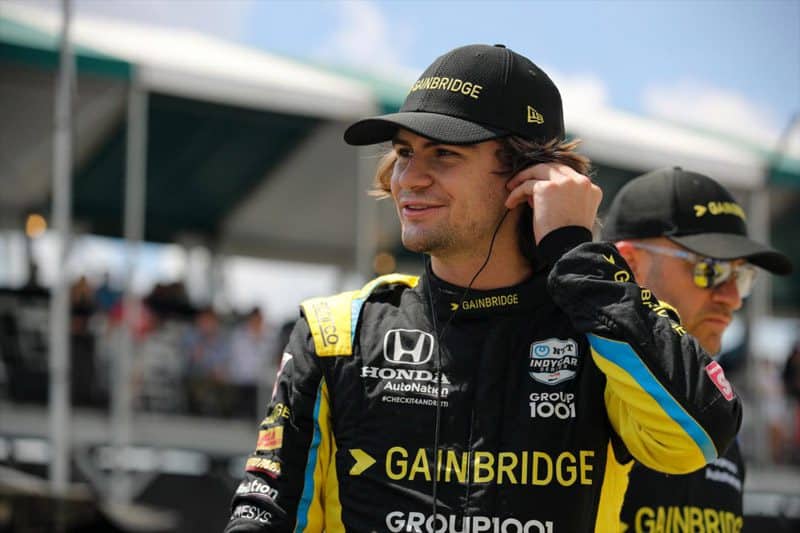 Colton Herta, after years of wanting to make a move to Formula One competition, finally has the keys to a seat he has craved.

But bureaucracy may well get in the way of America’s potential next full-time driver.

Following the Dutch Grand Prix this weekend, Chris Medland reported that Helmut Marko, who runs the Red Bull driver program and decides the lineups of both Red Bull Racing and Scuderia AlphaTauri, had outright told him that Herta will get a seat at AlphaTauri if the FIA makes an exception for his Super License application.

Helmut Marko just told me an agreement has already been reached with all parties for Colton Herta to join IF he is granted a Super Licence by the FIA, and he expects a decision by Monza #F1

The move would send Pierre Gasly to Alpine F1 Team, in the open seat vacated by Fernando Alonso and denied by Oscar Piastri. That deal is completely dependent on Herta being approved by the FIA, however.

Marko also suggested that agreement involves Gasly to Alpine, but again it’s an IF a Super Licence is granted to Herta #F1

A Super License (which will henceforth be referred to as simply “SL”) is effectively a driver’s license issued by the FIA that allows a driver to compete in F1. Throughout the years in F1, there have been plenty of unqualified drivers who have bought their way into the world’s largest racing series. The current scrutiny in the application process, implemented largely because Max Verstappen jumped from finishing third in a regional F3 championship into what is now an AlphaTauri car at age 16, is designed to keep unqualified drivers away.

And in large part, the system has done that. Say what you will about both Lance Stroll and Nicholas Latifi, but both went through this system. And although both have rides due to rich parents, both have proven they belong in F1 if anything for not being a danger on track. Stroll may be one of the most underrated drivers in the field, considering his tendency to keep his head down and end most days either in the points or right outside of it.

A driver needs to meet six prerequisites before being approved for an SL, with the first five being pretty basic stuff that most drivers can pretty easily accomplish. The sixth, however, is the hard part: “Accumulated at least 40 points over the previous three seasons in any combination of the championships reported in Supplement 1 of the regulations.”

What this means is that certain series that the FIA deems relevant rewards a certain amount of SL points dependent on where a driver finishes in the final point standings. In order to be fully cleared for an SL, they would have to reach the magic number of 40 points accumulated over the past three years.

I don’t normally suggest this, but in all reality, the best place online to find out more on this very confusing and complicated topic would probably be its Wikipedia page, which includes a table of all of the different series and how much they are worth.

There are a couple of obvious issues with this format, the first and most obvious being that some of the series are just completely misrepresented in their points breakdown. Obviously, the NASCAR one is a mess considering that one has a one-race championship between the top four, but that’s not the biggest offender.

IndyCar itself isn’t even the biggest offender. No, the problem series for me personally is Super Formula, a series that has cars that are almost at F1’s level when it comes to speed and a series where one of its drivers once drove in an F1 P1 session and ended up within a tenth of a second of the team’s veteran driver (Naoki Yanamoto for what is now AlphaTauri in 2019 versus Daniil Kvyat).

But let’s not forget how bad IndyCar has it in this system. One of the key issues with IndyCar is that it is a 17-race series in which five races (one of which is double points) are oval races, which should by all rights have much less to do with if a driver is fit for F1.

This is where Herta comes in. In reality, Herta has 32 points he can use for his SL through his IndyCar results recently. But Herta has vastly underperformed on ovals while overperforming on road courses, which means his SL point total isn’t actually reflective of his fitness for an F1 seat.

Theoretically, if you strip away the oval races in the #IndyCar championship (which obviously is a skillset that doesn't directly translate to F1), Herta has 66 Super License points.

I don't think folks realize just how much ONE OVAL RACE weighs the IndyCar championship. pic.twitter.com/Mvz0xiTNqC

So what should the FIA do? Well, for starters, they can make an exception to Herta because the entire reason for his not easily qualifying for an SL is because the series itself is not set up to be a simple feeder series.

What I would offer long-term would be to do away with this convoluted point system and instead go to what I call an SL-tier system. Essentially, the FIA would still look at a driver’s last three years of results, but I’ve taken most of the series in the current points table and have created four tiers, with each tier separated by a primary (top three in points) category and a secondary (only the champion) category.

I’ve also done away with the karting championships and non-F1 feeder series on the chart, such as Indy Lights and the NASCAR Xfinity Series. Mainly because their presence makes things way too convoluted, and also because they really should not be involved as to determining if a driver is ready for F1.

Finally, I’m going to bump the age minimum to be in F1 up to 20. I do not think a teenager has any business being in an F1 car, and anybody who saw Verstappen’s rookie season will say the exact same thing. 18- and-19-year-olds would still be allowed to test cars, and 19-year-olds would be able to race in F1 if their birthday is prior to July, but other than that, they need to spend more time in other series.

In order to be eligible for an SL from results in tier one, a driver must also either have an additional 80% participation season in a series in this tier or two more in the tiers below it within a three-year time period.

In order to be eligible for an SL from results in tier two, a driver must also either have an additional 80% participation season in a series in this tier (or the one above it) or two more in the tiers below it within a three-year time period. Drivers must also have completed 1,000 kilometers in F1 testing prior to their first weekend in the series.

In order to be eligible for an SL from results in tier three, a driver must also have two additional 80% participation season in a series in this tier or the one below it. They must also have accomplished another tier three or tier four point finish in that three-year period. Drivers must also have completed 2,000 kilometers in F1 testing prior to their first weekend in the series. There is no primary category in this tier, only a secondary.

In order to be eligible for an SL from results in tier four, a driver must have accomplished three tier four qualifying seasons in the previous three years. Drivers must also have completed 3,000 kilometers in F1 testing prior to their first weekend in the series.

The FIA would also reserve the right to be able to say that a series doesn’t count. This is part of the controversy with Herta, as the FIA decided that his 2018 Indy Lights campaign, which would have gotten him to that magic 40 number in real life, did not count because only nine cars started in the first race in that series. But with no feeder series in my system, this topic would almost never come up.

This system may seem like it is opening the floodgates for a number of different drivers to be eligible. But in reality, by limiting driver results to only the top three point finishers or champions, it means we’re not going to have drivers being able to game the system anymore in order to get an SL, like Pietro Fittipaldi did or Nikita Mazepin’s fifth place in F2 getting him over the finish line.

Only the best of the best would be eligible for F1, with 10 drivers from tier one being instantly ready for the series, meaning there can be a ready supply of drivers not needing to go through hoops in order to be granted a seat.

But the FIA is probably going to end up denying Herta an SL exception, in large part because granting him one would hurt their own interests by devaluing F2 and F3. And the wait for a top American driver in F1 will continue, not due to lack of results but due to a bad political hand.