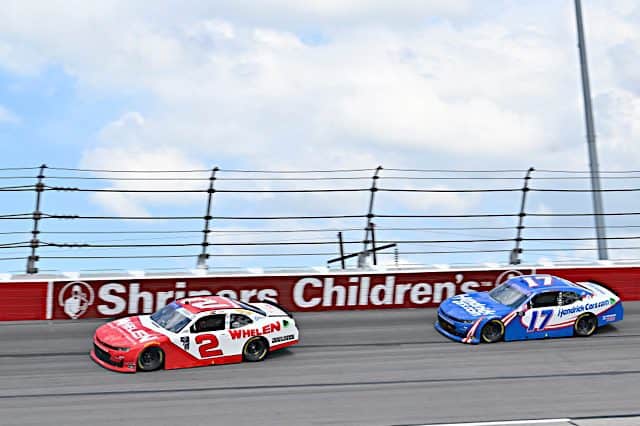 When Cup drivers run Xfinity Series races, are they obligated to stay out of the way of championship-eligible regulars? -Ciara L., Fayetteville, N.C.

There can’t be a satisfying answer to this, which is what makes it a great question.

Since 2018, NASCAR has limited the amount of lower-series races in which Cup Series drivers can compete to ensure that the NASCAR Xfinity and Camping World Truck series aren’t dominated by the same drivers in the same equipment that always run up front on Sundays.

This policy has allowed competition in the divisions to flourish, going from just six wins for Xfinity Series regulars in 2011 (out of 34 races) to 26 (from 33) 10 years later. For the most part, these restrictions are a win-win, letting Cup drivers earn a little bit extra experience, glory and prize money a few times a year, letting teams sell sponsorship based on big names on the driver rail, yet keeping the focus on the Xfinity field by fully excluding Cup drivers from Dash 4 Cash and playoff races.

Still, every so often, we’ll get a race like Saturday’s (Sept. 3) Sport Clips VFW Help A Hero 200, where a fender-banging duel in the closing laps between Cup driver Kyle Larson and Xfinity Series bubble driver Sheldon Creed allowed Noah Gragson to pass them both.

Should Larson have recognized that the win would mean more to Creed and not run him as hard in the closing laps? After all, he’s a guest in Creed’s series.

See also
Creed, Larson All Smiles Despite Last-Lap Skirmish at Darlington - 'I Had a Blast'

No. This is racing, and nobody is entitled to a ride, a win or a single position.

Don’t get me wrong, they all should be entitled to basic respect, safety and fair compensation, but on the track, nobody deserves an inch. In the 2019 Bristol Night Race, did Matt DiBenedetto deserve the win so badly that Denny Hamlin should have just pulled over? Even though Hamlin felt so bad he had to apologize to the driver he beat (cleanly, I might add), he still went up and passed him, keeping DiBenedetto out of victory lane and the playoffs.

Though Creed’s last-lap defeat may leave an unfortunate taste in the mouths of some, the driver himself isn’t among their number.

Sheldon Creed on the battle with Kyle Larson and then Noah Gragson on the final lap as Creed had to settle for second at Darlington: “I don’t think there is anything wrong with the way they raced me.” pic.twitter.com/hMD1Qub0pa

“I thought that was just hard racing,” Creed said. “There’s nothing wrong with that.”

Luckily, Larson’s Hendrick Motorsports No. 17 team seems to be the exception to a new rule. In 2022, we’ve seen a phenomenon where Cup drivers will run (and even win) Xfinity Series races for mid-pack teams: Cole Custer with SS Greenlight Racing at Auto Club Speedway and Tyler Reddick with Big Machine Racing at Texas Motor Speedway, for example.

While the stakes of these cameos may be low for the drivers (neither Reddick nor Custer has anything left to prove at the Xfinity level), they’re much higher for the teams. Selling sponsorship based on wins and Cup driver appearances can transform these also-ran operations.

This phenomenon may be due to the fact that Cup drivers can no longer score points for the Xfinity owners championship. It may come from the financial pressure on Cup teams to cut their Xfinity programs, it may be out of some weird sense of fairness or hope to replicate Ross Chastain‘s Xfinity-backmarker-to-Cup-frontrunner ascent. Regardless, it helps reduce this problem.

But if you ask Creed, it isn’t really a problem at all.

After scoring their first win together Sunday at Darlington, should we expect more wins from Erik Jones and Petty GMS Motorsports in 2023? -Bert G., Sioux City, Iowa

Yes. My conservative prediction would be at least one win for Erik Jones next season, and the sky’s the limit for 2024 and beyond. “That Jones boy” is still young at 26 years old, and he’s quite a catch for Petty GMS.

Still feels like a dream. So proud of this No. 43 team and all we've been able to accomplish. We did it. 😎 pic.twitter.com/alDsQymRai

In the days before Cup drivers were limited to five starts a year, Jones was a lower series standout, winning six times in the Xfinity Series between 2015-16. After a rookie year in Cup at Furniture Row Racing in 2017, Jones quickly became a playoff challenger, winning his way into the 2018 and 2019 postseason before Joe Gibbs Racing replaced him with Christopher Bell at the end of a winless 2020.

Just a few years ago, Jones was the next big thing. The NASCAR world has the memory of a goldfish; we would all do better to remember that young drivers generally take a while to deliver on their promise. Look no further than Joey Logano, also let go after winning just twice for JGR before he won the championship by the end of the decade.

The numbers (one win, three top fives and 10 top 10s in 27 races for a first-year team) don’t lie. Jones is a good racecar driver, but by far his greatest advantage is that the new Petty GMS is not the Richard Petty Motorsports we used to know and love, a single-car minnow of an operation that sometimes couldn’t even afford to bring a backup car to the track.

New co-owner Maury Gallagher is the president and CEO of Allegiant Air, a budget airline whose logo has adorned the side of GMS cars and trucks for years, including Ty Dillon’s No. 42 occasionally throughout this season. Gallagher and Allegiant are known for large-scale investments in sports marketing, particularly through the 20-year-deal that sees the Las Vegas Raiders play in Allegiant Stadium, reportedly the most expensive naming rights deal in NFL history at the time of its 2019 signing.

The King and co. in town for today's @WashingtonNFL vs. @Raiders matchup 😎 pic.twitter.com/EGfraEjl3P

They say the only way to make a small fortune in racing is to start with a large one. With Gallagher now signing the checks, the famous No. 43 finally has the funding that the car lacked in the later Richard Petty Motorsports years (with the exception of deals signed following Bubba Wallace’s emergence as a sponsorship giant).

Swapping the known quantity of Dillon for Xfinity Series headline-generator Noah Gragson in the team’s No. 42 car for 2023 is the type of big gamble that a team needs money to pull off. And locking Jones down with a multi-year deal earlier this season suggests that both Jones and Gallagher see each other as their ticket to the front of the field.

Erik Jones and Petty GMS Motorsports agree to multi-year contract extension for Jones to continue driving the No. 43 car. This was expected as Jones had said for a while he hoped to return and was working on a new deal.

Yes, by winning the Southern 500, Jones proved that he and Petty are back. More importantly, Maury Gallagher proved he’s arrived.

New two-car teams from Trackhouse Racing Team, 23XI Racing and Kaulig Racing have stolen the headlines throughout 2022. But Darlington reminded us what we should have known all along: Petty GMS is here, and it is serious.

Expect them to continue this upward trajectory next year. Mark my words, more wins are coming for the No. 43.

Cup guys racing in the Lower Series is better for young drivers. Should they make up half of the field or more? Not at all, but a few sprinkled in turns up the heat on the young guys. It opens them up to a better level of competition at a younger age. Look at guys like Keselowski, Kyle Busch, Carl Edwards, Joey Logano as examples of drivers who came into Xfinity during the “Buschwahcking” stage and all turned out to be champions, or drivers who were consistent contenders. Look at how Ty Gibbs has progressed, eventually beating out the 2021 CUP CHAMPION at one of the toughest tracks in the sport. As for the Truck Series, would the early champions of that series become legends if they weren’t racing against guys like Terry Labonte, Geoff Bodine, and Kenny Schrader for the first couple years? Racing against more competition turns out young prospects who are already acclimated to the “grind” associated with going up against the best 36 stock drivers in the world week in and week out, instead of being shell shocked when getting to Cup like Danica or Cole Custard.

As for the Playoff stuff- like I said on another article, whoever misses the Playoffs in Xfnity will have had 26 races to get in. One race in the grand scheme of things won’t determine that. Less than 20 points seperate Creed from Sieg, and that situation could easily be reversed right now if Creed hadn’t run so poorly in the beginning and middle parts of the season.