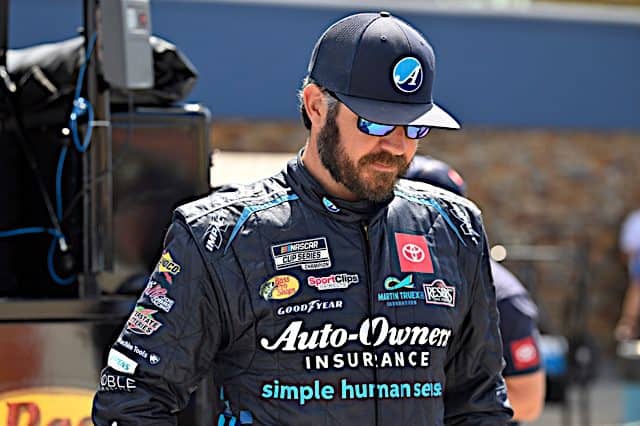 Did You Notice? … NASCAR safety has remained a front page story in the Cup Series for close to two months?

Darlington Raceway was the latest in a long line of problems, with Kevin Harvick‘s Ford going up in flames despite never touching another car on track or the outside wall.

Let’s do a quick review of the scary moments in the sport the last two months.

Pocono Raceway (July 23): Kurt Busch suffered a concussion after crashing in turn 3 during his qualifying lap. Busch hasn’t been in a stock car since, and those around him have remained tight-lipped about his recovery. During NASCAR Playoff Media Day, Denny Hamlin recently explained, “He’s getting better and he’s kind of plateaued, which is something he wouldn’t think would happen. He’s gotten to about 80%, and it’s kind of stayed there. I think the rest is just going to take quite a bit of time.”

Indianapolis Motor Speedway Road Course (July 31): Chris Buescher’s No. 17 caught fire over the course of the race. Buescher’s fire appeared to be the result of contact with Bubba Wallace that damaged his exhaust and rocker box assembly. The resulting blaze entered the inside of his car, igniting the door foam and melting various parts internally.

Buescher somehow remained in the car, abiding by a NASCAR rule that meant exiting the vehicle would have forced the No. 17 to retire from the race. He miraculously fought back to finish 10th. Joey Logano‘s car also caught fire during the course of the afternoon.

Richmond Raceway (Aug. 14): This type of fire happened again, with Chase Briscoe the victim as a potential top-five finish is ruined. Once again, a buildup of rubber appeared to be the culprit, as you can see the fire rise up from the side skirt, all the way into the side of the car.

Daytona International Speedway (Aug. 28): A wild wreck triggered by a raging downpour in turn 1 caused a number of hard hits into the outside wall. Bubba Wallace openly vented on his radio, swearing over the harshness of his hit while Denny Hamlin groaned in pain. Hamlin wound up missing a planned NASCAR Xfinity Series start due to soreness while he and other drivers were openly critical of officiating putting them in harm’s way.

Darlington Raceway (Sept. 4): Two more drivers, JJ Yeley and Kevin Harvick, experienced fires inside their racecars. Harvick’s was the most serious to date, forcing him to pull to the inside of the racetrack and bail out as flames engulfed the inside of his No. 4 car.

Harvick’s post-race comments were pointed and designed to send a message, claiming NASCAR feels it’s “cheaper not to fix” what he thinks is an obvious problem with safety. Referring to pieces with this Next Gen setup as “crappy-ass parts,” he claimed the only way to change things was “to find somebody to run the show who can run it.”

NASCAR Senior Vice President Scott Miller pushed back on those comments Tuesday (Sept. 6), claiming on SIRIUS XM Radio the sport has “all hands on deck” to fix what’s clearly a problem.

“It’s unacceptable for the cars to catch on fire,” Miller said, “And we’ve been working on different solutions for different problems, different things along the way that seem to maybe be the trigger, and obviously we still have work to do.”

But here’s what Miller didn’t do. He didn’t offer a clear solution or even commit to what appears to casual observers to be the likely cause of Harvick’s fire: rubber buildup in the exhaust/rocker box area that ignited. That’s unlikely to please people inside and outside the garage, noticing a trend within a six-week period that has shown no signs of slowing.

It’s notable all five cars that ignited are Fords, as the way their exhaust system is positioned may make them more susceptible to these fires than other manufacturers. But if you were driving a Chevy or Toyota, would you feel good about things? It’s the type of Next Gen unpredictability no one wants; mechanical failures are one thing, but flames coming through the dashboard as you’re driving at over 150 miles an hour is a problem no one should be facing.

Harvick, at 46 years old, should carry some extra weight with his comments. The man who replaced Dale Earnhardt after the most famous on-track death in NASCAR history remembers a time when safety was in question, where drivers entered every race knowing the weight of their lives at risk. We’ve now gone 21 years in the sport’s top three series without losing another driver. It’s to the sport’s credit, as close to an impeccable safety record as you can get considering the speeds involved. IndyCar (see: Dan Wheldon, Justin Wilson) and Formula 1 (Jules Bianchi) would love to have that type of resume.

There are some who feel changes to the Next Gen chassis, if problems are found, should not happen until after the season. That if a change is made, especially if it’s specific to Fords in the case of these fire incidents, could cause one team to take off and win a championship they otherwise wouldn’t.

I agree there’s always a risk to changing in-season rules. But the risk of affecting competition should never overshadow keeping your drivers safe. Losing someone would have personal and far-reaching impacts far beyond giving, say, Team Penske a potential extra boost down the stretch.

It’s becoming a serious situation that needs immediate answers. And at this point, NASCAR has had over a month to assess the initial fire we saw from Buescher. Its potentially had a year-plus knowing the safety challenges here after concerns were raised last summer before a panel of experts temporarily put them to bed.

More than at anytime in the last two decades, it feels like NASCAR is playing with fire. I’m not the engineer equipped to give you answers; I just know getting burnt would be the disaster killing all momentum from what’s been a renaissance season on the racetrack.

Did You Notice? … Martin Truex Jr. is headed to the wrong type of NASCAR record? Truex, who missed the postseason despite finishing fourth in regular season points, fell short of victory lane again at Darlington Raceway. A total of 48 laps led and a commanding late lead got wiped out within seconds once the engine overheated on his No. 19 Joe Gibbs Racing Toyota.

That brings Truex to a dubious achievement: 500+ laps led on the year without a victory to show for it. It’s just the 15th time in the last 50 years a driver has led more than 500 laps over the course of a season but failed to cash in on victory lane.

Keep in mind we’ve still got nine races to go; it’s realistic Truex could rise to as high as fourth on this list. Already, he’s guaranteed the lowest points finish amongst this group, and his top-five total (three) is the fewest of anyone who’s led this many laps.

That in itself shows how difficult Truex’s season has been. To have as many DNFs as top-five finishes? Simply unheard of for a driver who’s made the Championship 4 in four out of the past five years. His average finish of 13.9 is the worst for him since 2016, back during the pre-championship days of single car Furniture Row Racing.

See also
Dropping the Hammer: How Erik Jones Got His 'Groove' Back

But a guy like Truex out there, putting up that type of laps led total, illustrates how dangerous the non-playoff crowd is this season. Erik Jones scored an upset already for this group, winning the Southern 500 in place of Truex, and there are plenty more drivers capable of following suit. Brad Keselowski quietly scored a seventh-place finish at Darlington and looms large at Talladega Superspeedway in a couple of weeks; it’s a track the 2012 Cup champion has won at six times. Chris Buescher and Michael McDowell have both been exceptional on road courses this season and could steal one at the Charlotte Motor Speedway ROVAL.

Can any of them break through? Truex sure hopes it’s him, seeking to become the 18th different winner in 28 races after Kansas Speedway this weekend.

NASCAR needs to issue a Sawz-All to every organization and have them cut the exterior rocker panel cover off the headers (which would also bring down the cockpit heat issues), and have the body for next year made that way, with headers exposed and nowhere for excess rubber to accumulate and catch fire. Of course none of this will happen because NASCAR never utilizes a simple, direct fix to anything.

Harvick “claimed the only way to change things was “to find somebody to run the show who can run it.”

Something I’ve been saying for many years. My new favorite driver.

When Brian and his ego took control of his new toy and had his first “brilliant” idea a lot of people felt he was not the best person for the position and everything he did after that was proof of that.

If the Championship was a full 36 events instead of the 10 events for a title Marty wouldn’t have that problem. But there is no getting around the fact that NA$CAR events are considered examples of Brian’s product and haven’t been a real “race” for years. The law of unintended consequences strikes again… And again… And…